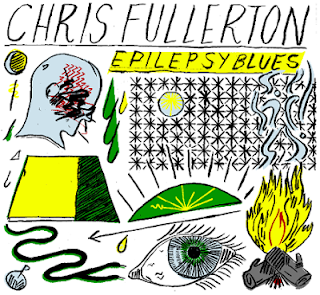 Chris Fullerton’s album Epilepsy Blues was released early in the year, and is already seeing a re-issue, which is due out in a couple of weeks. This will give most of us a chance to enjoy this remarkable disc. Yeah, I too missed it the first time around. This album features excellent songwriting and wonderful delivery. All the songs were written by Chris Fullerton, who also plays most of the instruments here, though getting some help from Luke Willis on violin and Ian Sutton on pedal steel. I loved this album the first time I listened to it, and am somehow enjoying it even more after repeated spins. It is one of the best of the year so far.

It opens with a song titled “Bad Winds,” and I’m on board immediately. The first part of this song is delivered nearly a cappella, with just a bit of strumming on guitar to accompany his voice. And what a voice. His is one of those voices with strength and character, worn just enough that you believe his tales, emotional enough that you want to hear them. And he starts by directly addressing alcohol: “Whiskey/You come wash over me/’Cause I’ve been underneath/In the pastures of sin.” It’s more than a minute before it kicks in, so that when it does, it comes as a wonderful surprise. And at that moment, I’m hooked, but the song only gets better from there. “Sometimes I feel like only the lord and I know/Where the bad winds blow.” Well, these days I think we all know where the bad winds blow. That’s followed by “Come To Texas,” a delightful country tune in which he tries to convince a girl to come to Texas. Chris Fullerton is based in Austin, by the way. “The whole town’s a can of beer/I’ve been thinking of some things that I could do to you, my dear/And some of them things are just downright weird.” Amen! This track features Ian Sutton on pedal steel. Then Luke Willis joins Chris Fullerton on violin on “I Feel Nothing,” a pretty and mellow tune with some damn good lyrics. Check out these lines, which open the song: “You should see the way the stars look/All shiny and bright/The city lights can’t break them tonight/And my head feels no pain/With a mouthful of medicine.” Luke Willis also plays on “Ma Cherie Amie,” a slow dance. “Is it too early to say I love you/Because I do.”

Okay, the line “Well, I just can’t shake these epilepsy blues” might seem an obvious joke, but it made me smile. That’s clearly from the album’s title track, “Epilepsy Blues.” It begins with an old-time sound, like it’s being played on an old record player, which then dies – perhaps the power was cut, who knows. But then the song takes on a more immediate feel. “Well, if you’re smart you’ll see a neurologist/And if you ain’t smart you’ll find you a girl that is/That’s what I did, and that’s why I’m singing this.” And yes, Chris Fullerton has epilepsy. “Epilepsy Blues” is followed by “Float On Up And See,” which might be my favorite track. From the first lines, I love this song, and the “foaming at the mouth” line made me laugh aloud the first time I listened to it. Yet, this is a sweet, gorgeous song. And the violin adds a somber aspect to its beauty. By the way, these are the first lines: “Well, she unstraps her halo/Lets it fall to the floor/It doesn’t matter much anymore, man/’Cause she’s a goddamn angel.”

“Motel Blues” has a more playful, lighter vibe. Chris sings “And I complain, but why listen,” then pauses before continuing, “To the words a drunkard cries/And who would buy flowers for the clown.” In this song he also mentions the promise of having flying cars by now, asking, “Where have all my boyhood dreams gone?” And off into space we go at the end. Then, in the fun “El Paso Spacedance,” Chris wishes a happy birthday to Buzz Aldren. The album then concludes with an intriguing tune titled “Seven Roman Candles,” which features Lindsay Preston reciting an excerpt from the poem “Brooding Likeness,” written by Louise Gluck (she first reads the last few lines, then at the end of the song reads basically the second half of the poem). And check out these lines: “I went out walking in the snow/And the people just watched me stumble/Saying who’s that dead guy/While seven roman candles lit the night sky.”

CD Track List
Epilepsy Blues is scheduled to be released on August 11, 2017 on Eight 30 Records (though originally it was made available on February 27, 2017).
Posted by Michael Doherty at 9:09 PM