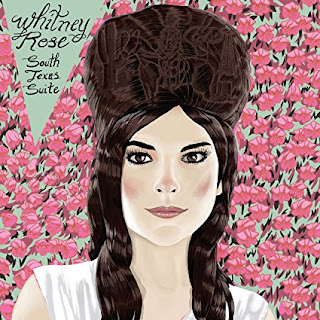 I was turned onto Whitney Rose last year with the release of her Heartbreaker Of The Year album. I immediately loved her voice and style, and was excited to hear more from her. Well, in January she will release a new six-track EP titled South Texas Suite, featuring mostly original material inspired by her move to Austin. When she released Heartbreaker Of The Year, she was based in Toronto, but after doing a residency at the Continental Club she decided to stay in Texas. South Texas Suite contains some great old-time country vibes, with some girl group pop flavors. She’s put together an incredible band for this release, including Bryce Clark on guitar, Sophia Johnson on guitar, Redd Volkaert on guitar, James Shelton on steel guitar, Tom Lewis on drums, Kevin Smith on bass, Erik Hokkanen on fiddle, and Earl Poole Ball on piano.

Whitney Rose opens the EP with “Three Minute Love Affair,” an original song that features Michael Guerra on accordion. It is a sweet tune about dancing with someone, and how for the length of the song the world is just the two of you. Yes, those can be magical moments, as the music determines the world and how long it will last. “Now there’s no one else, no darling, it’s just you and me/We ain’t got no future and we got no history.” This song has a “cha cha cha” ending. It’s followed by “Analog,” one of my favorites. It was written by fellow Austin singer/songwriter Brennen Leigh, who says it’s about the desire to go back to simpler things. This is a song I appreciate, expressing feelings that I have too (a lot of us do, it seems), with lines like “I don’t want advertisements on my telephone/I don’t want form letters, robo-calls” and “Now I’m not down on it just because it’s new/But in gaining a little, we’ve lost something too/When you climb into bed with a phone in your face/It feels like you’re lightyears away from this place.” Amen. Whitney Rose delivers an excellent rendition, and I love Erik Hokkanen’s fiddle on this one.

“My Boots” is a fun country tune written by Whitney Rose. It starts off with a sweet introduction, and then when it kicks in, it immediately transports us to a honky tonk dance hall. It’s a song about following one’s own personal style and feelings, no matter the surroundings. Here is the chorus: “I’ll go if I can wear my boots/I don’t feel like high heel shoes/And that don’t mean that I’m crazy/That don’t mean I ain’t a lady/Ain’t going to go as no one else/Only going as myself/I’ll go if I can wear my boots.” And I dig that piano part in the second half of the song. Boots or high heels or no shoes at all, you should be dancing by the end of this one.

“Bluebonnets For My Baby” has a sweeter sound, with a kind of classic girl group pop vibe mixed into its country elements. It’s a nice romantic slow dance number, written by yet another Austin singer/songwriter, Teri Joyce, and included on her 2010 release Kitchen Radio. Whitney Rose’s delightful voice seems custom-made for this type of material. She follows that with an original, “Lookin’ Back On Luckenbach” (yeah, it’s a cute title), a mellow tune about thinking back to a place one has left. “My mind is full with memories and dreams/I don’t need one more than the other/I need them both like I need air to breathe.” Whitney Rose then concludes the CD with “How ‘Bout A Hand For The Band,” a short instrumental number that was originally intended to be the ending of “My Boots.” And if you play it directly after “My Boots,” you’ll hear how it is the natural continuation of that song.

CD Track List
South Texas Suite is scheduled to be released on January 27, 2017 on Six Shooter Records.
Posted by Michael Doherty at 9:51 PM