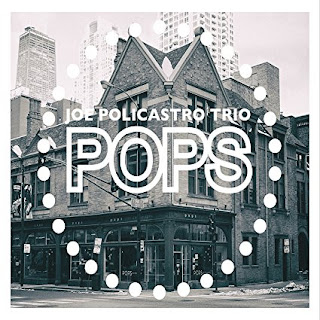 Joe Policastro Trio is based in Chicago, where the group has a residency at Pops For Champagne. The newest CD from the trio is titled Pops, a title which is partly in celebration of that venue, and also a succinct description of the type of music the band performs here, which includes covers of tunes by Stevie Wonder, Prince, Bee Gees and The Cars. Recorded in January of 2016 in Chicago (though not at that venue), this disc contains jazz instrumental renditions of familiar pop and rock songs. But these aren’t the type of jazz covers where the original songs that you love all but disappear in the interpretations. They are very present. Joe Policastro Trio is composed of Joe Policastro on bass, Dave Miller on guitar and Mikel Avery on drums. Joining them for certain tracks on this release are Andy Pratt on guitar and Andy Brown on guitar.

The CD opens with “Wives And Lovers,” written by Burt Bacharach and Hal David. This rendition has a strong rhythm. In the CD’s liner notes Joe Policastro mentions the song has questionable lyrics. Well, this version does away with the vocals, so you’re just left with a good groove. There is even a cool section where the bass takes the lead. By the way, here is a taste of the lyrics (see if you think them questionable): “I'm warning you/Day after day, there are girls at the office/And men will always be men/Don't send him off with your hair still in curlers/You may not see him again/For wives should always be lovers too.” Wow.

“Harvest Moon” is a very pretty, comforting Neil Young song, and these guys do a great job with it. This track is making me feel better after I made the mistake of reading more about the current political landscape. I have to remember not to do that, and to rely on the music to see me through these dark times. This tune certainly does the trick. Joe Policastro provides a lead on bass a little more than halfway through. That’s followed by Stevie Wonder’s “Creepin’,” a song that the Tony Kadleck Big Band also covered on 2014’s Around The Horn album. This version by Joe Policastro Trio gets really fun and funky toward the end.

I love The Pixies’ “Wave Of Mutilation,” and I’ve always preferred the “U.K. Surf” version heard in the film Pump Up The Volume. That is the version that this trio takes its inspiration from for their rendition, and they do a fantastic job with it. At times it’s meditative, and at other times grooving. Andy Pratt joins them on guitar for this one. (Hey, am I mad, or does the guitar do just a bit of “Santa Claus Is Coming To Town?” Listen at 2:50-2:52 and 3:01-3:05 and let me know what you think.) This is one of my favorite tracks. They follow that by dipping into disco with a cover of Bee Gees’ “More Than A Woman,” featuring some cool stuff on percussion. Andy Brown joins them on guitar for this track.

At the center of this album are two Prince songs: “Condition Of The Heart” and “Diamonds And Pearls.” “Condition Of The Heart” is a song from Prince’s 1985 record Around The World In A Day (the album that also contains “Raspberry Beret”). I love Joe’s lead on bass. “Condition Of The Heart” leads right into “Diamonds And Pearls,” the title track from Prince’s 1991 album. This version begins with a bass solo and becomes a seriously damn good jam, and is another of this disc’s highlights. I love this track. Joe Policastro Trio follows that with “Me And Mrs. Jones,” a song by Billy Paul, who, like Prince, left this world in 2016. (We lost a lot of great musicians and songwriters this year.) Andy Brown plays guitar on this track.

Joe Policastro Trio ends this release with a cover of The Cars’ “Drive,” which is an interesting choice.  I’m not sure I’ve ever heard a jazz cover of this song. In fact, I’m not sure I’ve heard this song at all since the 1980s. We were all fans of The Cars back then, and this song was a big hit for them in 1984. I might have to dig out my old cassette of Heartbeat City. This song always struck as me as incredibly sad, because the questions aren’t answered. Sometimes when I’d listen to it, I felt like the singer is offering to be the answer, to be the one to drive her home, and sometimes I felt there just was no answer, that we’re all alone. Andy Pratt joins Joe Policastro Trio on guitar on this track.