Patti LaBelle And The Bluebelles: “The Complete Atlantic Sides Plus” (2014) CD Review 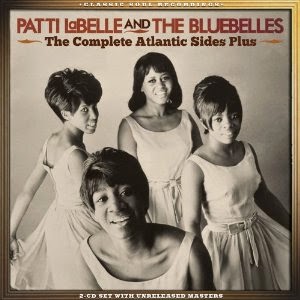 The Patti LaBelle music I heard while growing up was her 1970s and 1980s pop output, stuff like “New Attitude” and “Stir It Up,” and of course “Lady Marmalade,” from the band LaBelle. I had never heard that band’s earlier material. But before they became LaBelle, they were Patti LaBelle And The Bluebelles, and put out some great music in the 1960s. The Complete Atlantic Sides Plus collects forty tracks recorded between 1964 and 1969. A lot of these are covers of well-known hits such as “Unchained Melody” and “Yesterday.” There is also some original material. And there are a few previously unreleased tracks on the second disc.

This is the best stuff I’ve ever heard from Patti LaBelle. I was always impressed by her voice, but was never much of a fan of her 1980s material. This two-disc set includes nearly two hours of music. There are liner notes by David Nathan.

The Complete Atlantic Sides Plus opens with five live tracks recorded in July of 1964. (The sixth song from their set has been lost.) The first song is a surprise – the Irish ballad “Danny Boy.” I don’t think I’ve ever heard a doo-wop or soul rendition before. The live set also includes “Down The Aisle (The Wedding Song),” which had been a hit for the group the previous year. It’s a slow, pretty song.

“Patti’s Prayer” was co-written by Patti LaBelle, and it’s an incredibly gorgeous song, due mainly to her powerful vocal performance. I’m particularly fond of the chorus, when their voices blend so well. This is an excellent track, one of the collection’s highlights. I also really like “You Forgot How To Love,” as it has another strong, impressive vocal performance.

It makes sense for this group to cover “Unchained Melody,” a song that demands some serious vocal chops. And yes, the vocals are excellent on this rendition, but I wish they were allowed to carry the song more. There is a bit too much production in this version, and it takes away from the vocals. They also do a pretty good version of “Groovy Kind Of Love.”

There is a pretty innocence to the vocal approach at the beginning of “Try To Remember.” And then Patti really belts it out at certain key moments. The other women’s vocals have a playful quality (especially on “follow, follow, follow”).

“Yesterday” is one of the most covered pop songs, and Patti LaBelle And The Bluebelles do a wonderful rendition of it. The best moments are when their vocals blend. At those times, this version is absolutely gorgeous. I could, however, do without the others echoing Patti on “game to play” and “hide away.”

They do a pretty nice version of “More.” By the way, if you haven’t seen Mondo Cane, you should definitely check it out.

But probably the best track on the first disc is their wonderful and delightful cover of “Somewhere Over The Rainbow.” This track boasts such an incredible vocal performance, standing out even among all the other excellent vocal performances in this collection. This is a tremendous rendition, with a great amount of emotion and soul.

The first disc ends with a very cool and fun version of Curtis Mayfield’s “Family Man,” another of my favorite tracks.

“Always Something There To Remind Me”

The second disc opens with “Always Something There To Remind Me.” The first version of this song I ever heard was that by Naked Eyes. I loved, and still love, that version, and it wasn’t until years later that I learned it was a cover (hey, give me a break, I was a child) and began hearing much earlier renditions. The version by Patti LaBelle And The Bluebelles is interesting. It begins slowly, then kicks in with a wild pace and energy. And yeah, I definitely dig it.

“Take Me For A Little While” is another really cool track on the second disc. It builds nicely, with some great peaks and valleys. “Every time you put me down, I love you more/I feel so helpless.” “Dreamer” is one of the most interesting tracks on this release. It was also the title track of the band’s 1967 Atlantic LP.

In addition to “Patti’s Prayer,” there are a few other songs written by band members. “I Need Your Love” is an original tune, written by Nona Hendryx. She also co-wrote “Wonderful,” a groovy tune that producer Don Davis co-wrote. This collection also includes “Loving Rules,” which Sarah Dash wrote.

This collection includes four tracks that were previously unreleased, including “How Can You Throw My Love Away,” “Forget It,” “Never For Me” and “When Joe Touches Me.” “Forget It” is a fun song with a good energy, written by Teddy Vann and Calvin White. My favorite of the previously unreleased tracks is “Never For Me.” “I’m going to make you my prisoner of love for all eternity.” Oh yes!

The Complete Atlantic Sides Plus was released on April 1, 2014 through Real Gone Music.

Posted by Michael Doherty at 5:13 PM