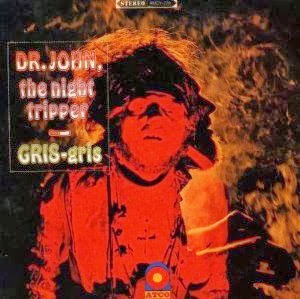 The year 1968 was such an interesting one for music. It was the year of The White Album, and of the Grateful Dead’s most experimental record, Anthem Of The Sun. Pop and rock music were certainly getting weird, exploring new areas. And so it seems completely fitting that 1968 was also the year of Dr. John’s first album, Gris-Gris, exploring the strange landscape of New Orleans. It’s now being re-issued by Real Gone Music.

It’s a fantastic record, with a sound and attitude and ambiance far afield of the norm. A place it’s wonderful to visit. At times it feels like Dr. John really is a voodoo practitioner and could easily control your mind through these recordings. Listen to “Danse Fambeaux,” for example.

“Gris-Gris Gumbo Ya Ya”

Dr. John starts off the opening track, “Gris-Gris Gumbo Ya Ya,” with an introduction: “They call me Dr. John, known as the Night Tripper.” The vocals have a sort of sly delivery, with a slow groove, like he’s sneaking into your world. The vocals are very much to the fore, like the band is in the background, under Dr. John’s hypnotic spell. They’ve already bought what he’s selling, and are now helping him to win more clients. “If you got love troubles, you got a bad woman you can’t control, I got just the thing for you.” There’s a short percussion solo before Dr. John repeats the opening line. The whole thing has such a cool effect.

“Danse Kalinda Ba Doom” is a stranger, and more haunting track, with some wonderful percussion, which has a loose feel, like it’s being performed out in some clearing in the swamp at night. And I love that mandolin.

Things begin moving closer to normal with “Mama Roux,” with a good groove and fun vibe, and some perfect backing vocals. And Dr. John’s relaxed, easy vocal delivery works so well. “Mama Roux/She was the queen of the little red, white and blue.”

“Croker Courtbullion” features some more great percussion. Let your body swing and writhe, and check out that interesting work on keys and on guitar. This is a bizarre, jazzy jam. Things may seem a bit chaotic at times, but you get the feeling that’s just to catch us off guard so these guys can go in for the kill. Clearly they’re pulling us into some sort of jungle, leading us away from safety, from comfort.

Things head a little more toward normal again with “Jump Sturdy,” a song with a nice groove and something of an old rock and roll vibe. It also creates an interesting character, with lines like “People say she used to dance with the fish/Some people say she juggled fire in a dish” and “She raised her hands and caused an electrical storm/She was a treacherous lady.”

Gris-Gris ends with the album’s most well-known tune, “Walk On Guilded Splinters,” another wonderfully odd and hypnotic tune, with the title line almost chanted. I love those backing vocals. And I like that this song takes its time. It’s in no hurry. It knows it has you in its grip and is just playing with you as it pleases. And it feels so good to be played with this way. There is a great section that begins with some simple percussion, then grows. I love it.

Gris-Gris was released on March 4, 2014 (yes, on Mardi Gras) through Real Gone Music.

Posted by Michael Doherty at 4:32 PM