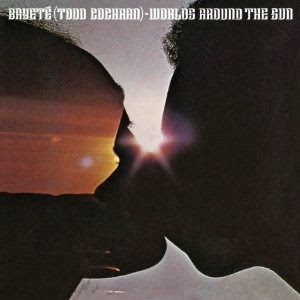 Todd Cochran’s debut album, Worlds Around The Sun, which he recorded and released under the name Bayeté, is an excellent collection of original compositions mixing jazz and funk. For some reason it was not released on CD until this month. This CD issue contains two previously unreleased bonus tracks, including the phenomenal “Shine The Knock,” a wild, energetic, delicious twelve-minute track. New liner notes include an interview with Todd Cochran about these songs. I appreciate that the liner notes also say “Bobby Hutcherson appears courtesy of himself and Blue Note Records.” Usually it just lists the label, as if the musician had no say in the matter. And yes, Bobby Hutcherson plays vibes and marimba on this album.

The music contained on this album has a beautiful and intoxicating freedom about it, without being chaotic, as some jazz tends to be when it tries to attain heights of freedom. There are rhythms and grooves, but the music itself has a freeing quality. Sometimes music can lift you out of yourself, take you on a journey if you let it. There are times when listening to music that I feel completely unrestricted, and it comes as a surprise that I can’t levitate or pass through walls. Bayeté's music taps into that, contributes to that sense. I wonder if it will have the same effect for you. I hope so. Let me know.

The album’s first track, “It Ain’t,” opens with pretty, uplifting tones. But it’s Todd Cochran’s work on piano that I really love on this track, and the way the piano and percussion interact. It’s like dancing, except like two dances colliding and merging. The instruments interact in surprising ways on this track, like a real and honest conversation. And I love the bass solo, with just touches of piano over it. That leads to a good drum solo.

“Free Angela (Thoughts…and all I’ve got to say)”

“Free Angela (Thoughts…and all I’ve got to say)” is a tune inspired by and about Angela Davis, a woman who was once on the FBI’s Ten Most Wanted Fugitive List. This is a very groovy and funky number, with a surprising “Free Angela” chant coming in early on. But the instruments speak just as clearly and eloquently as the voices. This is an exciting and engaging composition. Every track on this release is really good, but this is one of the highlights. It has sort of a false ending, as it fades out a few minutes in, then changes, like there are other things to say on the subject. And these are expressed as more relaxed, thoughtful reflections – less urgent, perhaps less emotional, like there has been some time to process what’s happened.

Santana recorded a version of this tune a year later. This was not the only song inspired by Angela Davis. John Lennon included a song title “Angela” about her on Sometime In New York City, released in 1972. The Rolling Stones recorded “Sweet Black Angel” about Angela Davis, including it on their 1972 record Exile On Main St.

“Njeri (Belonging to a warrior)”

“Njeri (Belonging to a warrior)” for me often feels like floating, even flying above the world, and being able to look down with some detachment and with some love. And then, interestingly, other sections of the song feel to me like they’re coming from the other perspective of being down amid the busyness of living and looking up and wishing to rise above. And then there comes an interaction between the two perspectives that is beautiful, even comforting. That’s just my take, of course.

“I’m On It” then has a great, funky groove, and vocals. I love the way this album combines jazz and more funky elements. It’s great that “Njeri” is followed by this much earthier groove. Perfect.

“Bayeté (Between man and god)

“Bayeté (Between man and god),” the album’s big track, bears the same name that Todd Cochran gave himself at the time of this album. The word is defined in its parenthetical title: “Between man and god.” The track begins with a kind of urgency, the drums setting the pace and drive. There is something hurried early on, but the nearly soothing repetition of the bass line changes it from feeling rushed to almost a sort of dance. And of course the tune changes from there, exploring several avenues but never straying too far afield, and maintaining a sort of flow. Toward the end you realize you’re completely caught up in it, and it’s nearly magical. It’s a tremendous piece of music, and I’m particularly fond of Todd Cochran’s work on keys.

The album then takes on a mellower vibe with “Eurus (The southeast wind).” Things are a lot slower, but the bass at moments still presses against the slower atmosphere. It takes a few moments, but this atmosphere overtakes you and carries you along with it, lightly, like you weigh nothing. And eventually your colors blend with those of this composition, and then it’s over.

This CD issue of Worlds Around The Sun contains two bonus tracks, both previously unreleased. The first, “Phoebe,” is a cool jazz piece with a great pace, the horns soaring and singing. It gets pretty wild at moments, and also includes a bass solo.

As cool as that track is, it pales next to the supreme excitement and brilliance of “Shine The Knock,” the second bonus track. This is twelve and a half minutes of bliss. It has a great funky base from which it builds and flows and climbs and explodes. This is a fantastic and joyous jam. Wow. And wow. And again, wow. And to think this wasn’t ever released before. Insane.

This special re-issue of Worlds Around The Sun was released on March 11, 2014 through Omnivore Recordings.

Posted by Michael Doherty at 5:52 PM