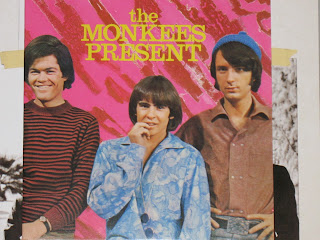 Rhino has been releasing excellent box sets of the original Monkees albums. The latest to receive the deluxe treatment is The Monkees Present. The Deluxe Edition includes three discs, a 7-inch and a book. The first disc features the original stereo album plus bonus material, and you can read my review here. The second disc features mono mixes and rarities, and you can read my review here.

The third disc, Sessions, includes alternate takes, alternate mixes, backing tracks, and a couple of songs that were previously unreleased. In fact, of the twenty-eight tracks, only three were previously issued. There are three takes of the “We’ll Be Back In A Minute” jingle, two of which were previously released on Missing Links Volume Three. The other track that was previously released is the great alternate stereo mix of “Listen To The Band,” which was included on the 1994 edition of The Monkees Present. All the rest is stuff you haven’t heard before.

The disc opens with an alternate take of the Micky Dolenz song, “Little Girl,” the song that opens The Monkees Present. Micky counts off the tune at the beginning. It ends abruptly. There’s also a nice alternate take of David Jones’ “If I Knew.” The alternate take of “If You Have The time” begins with a bit of studio banter. I love this song, which was written by David Jones and Bill Chadwick, and this take has a slightly more raw and playful sound, which I dig.

The alternate take of “French Song” has a more stripped down, simple feel. There are alternate takes of “Pillow Time,” two takes in a row, as the first of the two ends quickly after a mistake. The second has a really nice extended ending. At the beginning of the alternate take of “The Good Earth,” Davy says, “Just one more time, and I can’t do it anymore.”

There are two previously unreleased songs, both sung by David Jones. The first is “How Can I Tell You,” a cool, late-night jazzy tune written by David Jones and Bill Chadwick. I really like Davy’s vocal delivery, particularly on the line, “I love you.” The second is “Opening Night,” a tune written by Charlie Smalls. The song builds well, and I really enjoy the second half of the song. Charlie Smalls appeared in an episode of The Monkees television show, and is known for writing the music for The Wiz.

Alternate Mixes, Including “Mommy And Daddy”

There are a couple of alternate mixes of Michael Nesmith songs, including the playful “Calico Girlfriend” and “Little Red Rider.” This disc includes an alternate mix of the rousing, energetic “You’re So Good,” sung by Micky. This is one of those tunes Micky gets really into.

There is also a strange and interesting alternate mix of “Mommy And Daddy” from May of 1969. This has some different lyrics from the album version, including the line about JFK, and is a more intense set of lyrics. This for me is one of the highlights of the third disc. Another highlight of this disc is the rough mix of “Steam Engine,” a great blast of raw power.

There are backing tracks for several Michael Nesmith tunes, including his sweet “Thank You My Friend,” the fun “Lynn Harper” (which has kind of a Stax feel), the groovy “Omega,” the seriously cool “Thirteen Is Not Our Lucky Number” and the rock and roll number “Michigan Blackhawk” (with the instruction, “Play it hard”).

CD Track List
The Monkees Present Deluxe Edition was released on August 13, 2013 through Rhino. I’m posting separate reviews of the first and second discs.
Posted by Michael Doherty at 6:34 PM