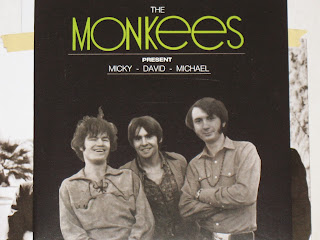 Rhino has been releasing excellent box sets of the original Monkees albums. The latest to receive the deluxe treatment (and perhaps the last, unless the rumor proves false about shunning Changes) is The Monkees Present. The Deluxe Edition includes three discs, a 7-inch and a book. The first disc features the original stereo album plus bonus material, and you can read my review here.

The second disc, Mono Mixes And Rarities, opens with a radio spot for the album. This was previously included on the 1994 version of The Monkees Present. Most of the rest of the second disc is previously unreleased material, including mono mixes of several of the album tracks, starting with the nice David Jones song “If I Knew” (the TV mono mix).

Even though The Monkees show had been canceled before The Monkees Present was recorded, several of these songs made their way into re-runs of the program (as well as songs from the next record, Changes). The songs were edited in, which totally confused me as a kid because Channel 56 in Massachusetts would sometimes show the original versions and sometimes the re-edited versions of episodes. Well, this second disc includes some of the TV mono mixes, including “French Song,” a song whose final line kind of haunted me as a kid, the simple, “Then they’re gone.”

There is also the TV mono mix of “Penny Music,” a fun, big number sung by Davy Jones. I love that this disc includes the TV mono mix of “Midnight Train,” a track that was shockingly previously unreleased, and the version I loved as a child. This was one of the tracks edited into re-runs of the television series. Even though those were episodes that had been tampered with, I wish that they’d be released on DVD.

There are three versions of “Mommy And Daddy,” one of my favorite Monkees tunes. The first is a mono. The other two are stereo mixes, one being from 7/1/69, the other from 7/2/69. All of these feature the lyrics released on the official version. And there are two versions of “Bye Bye Baby Bye Bye,” another favorite of mine. One is a really interesting alternate stereo mix.

This disc also includes the single version of “Listen To The Band.” This song still works for me every time I hear it. Even the fake audience applause doesn’t bother me. This disc also has the LP version that was included on Then And Now…The Best Of The Monkees.

"I Never Thought It Peculiar"

Also included are two mono mixes of “I Never Thought It Peculiar,” one without overdubs and one with them. “I Never Thought It Peculiar” would make it onto 1970’s Changes. There are two versions of “If You Have The Time,” both including a bit of studio banter at the beginning, which is cool. The first is an interesting mix, without the Moog. The second has the Moog. The instrumental sections of the two versions have very different feels. It’s interesting how the presence of the Moog can change the whole vibe of the song.

This disc also includes the version of “Steam Engine” I listened to as a kid, the version from Monkee Business, a compilation I listened to over and over. What a great song. I was always impressed by Micky’s vocal performance on this track, and still am.

A version of “Time And Time Again” was included as a bonus track on the 1994 re-issue of Changes. The version here, a mono mix, was previously unreleased, and includes a short bit of studio banter at the beginning.

The second disc ends with a weird radio spot for the Greatest Hits record. I wonder if that helped sell a single copy.

The Monkees Present Deluxe Edition was released on August 13, 2013 through Rhino. I’m posting separate reviews of the first and third discs.
Posted by Michael Doherty at 6:35 PM