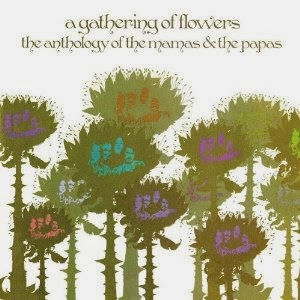 A Gathering Of Flowers: The Anthology Of The Mamas & The Papas is a really unusual and interesting compilation, in that it contains snippets of interviews with John Phillips and Cass Elliot. It was originally released in 1970, less than two years after the band’s breakup, and is now finally seeing a CD release, thanks to Real Gone Music.

I like that this isn’t just a greatest hits compilation, but features more interesting material like “Once Was A Time I Thought,” “Dancing Bear” and “Did You Ever Want To Cry.” Of course, the big hits are included, like “Monday, Monday” and “California Dreamin.’” Most of my favorites are here, such as “Creeque Alley,” “Dedicated To The One I Love,” “I Call Your Name,” “Got A Feelin’” and “I Saw Her Again Last Night.” The only song I wish were included is “Dream A Little Dream Of Me.”

The album has been remastered for this CD release, by Mike Milchner at Sonic Vision. The liner notes include a piece by Andy Wickham from 1970, as well as some song lyrics. But you might have trouble reading them, for the print is incredibly small. Oddly, some of the lyrics included are to songs that aren’t actually on the album, such as “Twelve Thirty (Young Girls Are Coming To The Canyon).” But there are plenty of photographs too, including some where Michelle Phillips looks absolutely adorable in a hooded fur jacket.

The CD opens with a bit of an interview with John Phillips about how the group got started. It’s pretty funny, particularly the bit about Mama Cass. And then it goes right into “Straight Shooter.” Many (but not all) of the tracks begin with snippets of interviews. At the beginning of “Monday, Monday,” Mama Cass talks about coming up with the name of the group.

The album includes their fun rendition of “Dancing In The Street.” Though they have beautiful voices, it’s the cool instrumental section that makes me love this version. It’s quite a bit different from what other groups do with this song. And I love how they get silly at the end of the tune. Their cover of “Do You Wanna Dance” is interesting. It’s slower than a lot of versions.

“Once Was A Time I Thought” begins with Mama Cass talking about John’s songwriting. This version includes a count-off at the beginning and some studio banter. (I think this version might also have been included on Creeque Alley: The History Of The Mamas And The Papas.) “Creeque Alley” begins with a snippet of an interview about producer Lou Adler. “Creeque Alley” was always one of my favorites. It’s so catchy, so fun, and of course it’s a personal tune for the group.

“Dancing Bear” begins with some studio banter, and ends with a bit of an interview in which John says he was never happy with the end of the song. “Dancing Bear” is a really unusual song that I like a lot. One of the best bits of studio banter is that at the beginning of “I Can’t Wait.” John demonstrates how a certain line should be sung, and that leads to some delightful silliness.

Some tracks include no interviews or studio banter, such as “Trip, Stumble And Fall,” “Dedicated To The One I Love,” “Free Advice,” “Got A Feelin’” and “No Salt On Her Tail.”

A Gathering Of Flowers: The Anthology Of The Mamas & The Papas is scheduled to be released on February 4, 2014 through Real Gone Music.

Posted by Michael Doherty at 6:14 PM