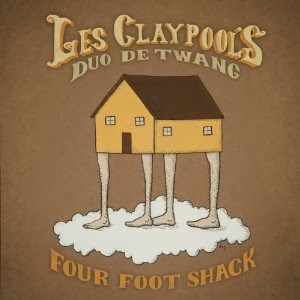 Four Foot Shack, the new CD from Les Claypool’s Duo De Twang, is one of the most fun CDs I have heard in a while. It’s full of great, raw, mean vibes, mixing country with a punk energy, and all with a certain sense of humor.  There is a great mix of original material with some well-chosen covers. Some of the tracks are songs that Les Claypool had also recorded with Primus, such as “Wynona’s Big Brown Beaver,” “Amos Moses” and “Jerry Was A Race Car Driver.” Others, like “Buzzards Of Green Hill” and “D’s Diner,” were recorded by Les Claypool’s Frog Brigade. Because this is Les Claypool, you can expect some great prominent bass lines. Songs like “Boonville Stomp” had me dancing like a maniac around my apartment. This album also features the best version of “Stayin’ Alive” I’ve ever heard. It’s fucking fantastic. I also absolutely love their rendition of “Battle Of New Orleans” which is another of the CD’s highlights, with lots of nice vocal work (and of course that famous theme from “Dixie”).

Four Foot Shack opens with its title track, a very short, but cool tune. Though it does sound like he’s singing from deep inside a large metal vat or something. The album truly gets going with the second track, “Wynona’s Big Brown Beaver.” It comes on with a great, raw power, those first notes on the bass like a great slap, waking me up and putting a big fucking smile on my face. There is also some seriously cool work on guitar on this track. The vocals come fast, delivered almost as if over a truck’s CB radio. This is some kick-ass back porch brew, and it’s that wonderful country element in the second half of the tune that really makes me love it. This is one of the tunes that Les Claypool recorded with Primus, the original version appearing on Tales From The Punchbowl.

Some of the greatest story-songs take place in Louisiana, and “Amos Moses” is a hell of a fun tune, whose story includes hunting alligators. This is one of the CD’s covers, written by Jerry Reed Hubbard, but these guys totally own the song. Hell, I believe these guys were there. I believe it all. For some reason, the way Les Claypool sings “his pretty wife Hannah” makes me laugh each time.

“Red State Girl” cracked me up too, with lyrics like “She got tits made out of recycled bottles/Her hair flipped up in a curl/She wants to grow up to be Sarah Palin/She’s a self-proclaimed bona fide red-state girl” and “He’s a poor man trapped in a poor man’s body.” I love that bass line. There is a false ending of sorts, followed by a little vocal play that is so damn funny and totally delightful.

“The Bridge Came Tumblin’ Down”

I totally dig that country rhythm on “The Bridge Came Tumblin’ Down,” played in a great heavy way with a thumping joyful power. This is one of my favorite tracks. It’s another that tells a great story, this one a true story about a bridge going up and coming down. “When the bridge came tumbling down/And nineteen men were drowned in June of 1958/In old Vancouver town.” There is a very cool instrumental section. “The Bridge Came Tumblin’ Down” was written by Tom Connors.

One of the highlights of Four Foot Shack is their completely wonderful cover of “Stayin’ Alive.” The first time I listened to this album, this track caught me by surprise, and delighted me so much I listened to it like five or six times before continuing on to the next song. This is absolutely my favorite cover ever of this song. It’s silly, and completely fucking awesome. The addition of the cowboy-type vocals on “Ah, ha, ha, ha, stayin’ alive” making it sound more like “How, how, how, how, we’re stayin’ alive” is just one of the many delightful touches on this track. Also, this is one of the tracks that feature Wylie Woods on mandolin and backing vocals. Anyone with ears should check out this tune. Honestly, even if the rest of the album were total horseshit, it would still be worth owning for this track.

Of course, the rest of the album is also really good. There’s a cool cover of “Pipeline.” This one is more of a straightforward cover, with the exception of the absolutely fantastic vocal line – the “la la la” part, which made me think that Jim’s Big Ego should open for these guys on tour. You’ll know what I mean when you hear it. Listen to this song, then listen to Jim’s Big Ego’s “She’s Dead.”

“Hendershot” is another favorite of mine. The vocals are what really make this one such a great track. There is a really good sense of humor in the delivery. There is also some nice work on guitar. This is a tune that Les Claypool recorded earlier with Les Claypool And The Holy Mackerel, and released on Highball With The Devil.

“Jerry Was A Race Car Driver”

Four Foot Shack concludes with “Jerry Was A Race Car Driver,” the song racing along just as its title character does. This is a song that Les Claypool recorded with Primus, the original version appearing on Sailing The Seas Of Cheese. It’s the perfect ending to this excellent CD.

Four Foot Shack is scheduled to be released on February 4, 2014 on ATO Records.

(Note: I also posted this review on Pop Culture Beast.)
Posted by Michael Doherty at 7:17 PM