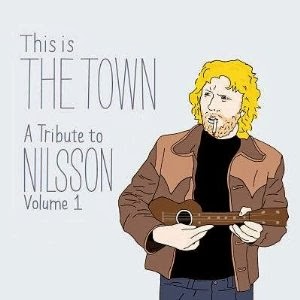 This Is The Town: A Tribute To Nilsson Volume 1 is an excellent collection of Nilsson covers done by artists who are clearly big fans. These are all new recordings, and feature some of his most well-known songs, including “Coconut” and “Me And My Arrow,” and a few that he didn’t write but were hits, such as “Everybody’s Talkin’” and (of course) “Without You.”

There are lots of interesting takes on Harry Nilsson’s material, with the artists clearly understanding the sense of humor in many of the songs. Obviously “You’re Breakin’ My Heart” stands out, but there are lots of humorous lyrics contained throughout his work, such as these lines from “Don’t Forget Me”: “I’ll miss you when I’m lonely/I’ll miss the alimony too.” Harry’s daughter Annie contributes one track as well as the album’s artwork.

This Is The Town was produced and mixed by Kenny Siegal, who plays bass on several tracks. His own band, Johnny Society, contributes a track. There is well over an hour of music here. By the way, the compilation’s title comes from the first line of “Everything’s Got ‘Em.”

This Is The Town opens with a fun groovy version of “Early In The Morning” by Langhorne Slim, done with a New Orleans beat. I dig the piano work. I also love that sort of anguished scream in Langhorne’s voice. It is interesting that the CD opens with one of only a few tunes not actually written by Harry Nilsson. “Early In The Morning” was written by Leo Hickman, Louis Jordan and Dallas Bartley.

Dawn Landes gives us a delightful, playful rendition of “You’re Breakin’ My Heart.” I absolutely love this song, and I love this version. The lead vocals  are sung so sweetly, so innocently: “You’re breakin' my heart/It tears me apart/Fuck you.” Everything about this one is perfect, including the backing vocals on “Fuck you.”

Jenny O contributes a nice, jazzy version of “1941,” with some excellent vocals. This song has a great vibe. This collection includes a very cool version of “Me And My Arrow” by The Mommyheads, who are clearly influenced by The Beatles in their approach to this famous tune.

Harry’s daughter, Annie Nilsson, covers one of my favorite Nilsson tunes, “Gotta Get Up.” This is a wonderful rendition. Harry’s son Zak is also on this track, playing drums and performing backing vocals. “We never thought we’d get older.” And it has the sound of a beautiful carnival ride gone haywire at the end.

Johanna Warren does a quite pretty rendition of “Without Her.” Johanna contributes her own backing vocals, which are beautiful. In fact, no other musician appears on this track.

One of my favorite tracks is The Wiyos’ version of “Nobody Cares About The Railroads Anymore,” due in large part to Mike Farcas’ work on harmonica. But also this song has a certain swing to it, which is delightful. I dig Seth Travins’ work on bass. And to top it off, there is some delicious lap steel by Ted Weber. (I need to hear more from this band.)

And then holy moly, what a cool version of “Sweethaven” done by Rasputina. Yes, it’s the song from Popeye, and if you remember the film, you know the music is the best thing about it. I got the soundtrack when the film came out mainly for this song, and listened to it over and over. Yeah, maybe I was a weird kid, but this is a great song. And this version features cello, an instrument I always love. (“He Needs Me” is another excellent song from that soundtrack. And I admit I also really like “He’s Large.”)

“Without You” and “Coconut”

One of Nilsson’s most famous songs is one he didn’t write – “Without You.” These days whenever I hear that song I think of that great scene from The Rules Of Attraction. Anyway, this rendition by Church Of Betty features sitar and table, giving it a very different feel. "Without You" was written by Pete Ham and Tom Evans of Badfinger, who first recorded the song.

Brian Dewan contributes a wonderful version of “Coconut,” one of Nilsson’s most famous and silly tunes. I love Brian’s vocals; they’re deep, and right there in your ear. Tracy Bonham provides backing vocals, and there’s something kind of sexy about the way she sings, “Doctor.”

“Mr. Richland’s Favorite Song” and “One”

Johnny Society’s version of “Mr. Richland’s Favorite Song” is very cool. Dan Levine plays tuba, trombone and trumpet on this track. This version includes a nod to “One,” another song that Nilsson included Aerial Ballet, the same album that contains the original version of “Mr. Richland’s Favorite Song.” Nilsson himself combined the two songs in the same way on the 1971 special, The Music Of Nilsson. (“One,” of course, was a big hit for Three Dog Night.)

This Is The Town: A Tribute To Nilsson Volume 1 is scheduled to be released on February 4, 2014 through The Royal Potato Family. I am looking forward to Volume 2.

(Note: I also posted this review on Pop Culture Beast.)
Posted by Michael Doherty at 2:52 PM