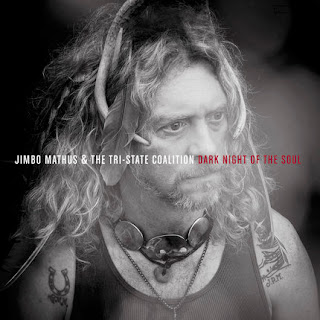 In the mid-1990s when I was living in Oregon I had the pleasure of seeing The Squirrel Nut Zippers in concert. It was a great show (even though they refused to play “Anything But Love”). And then for some reason or another I lost track of those musicians, until 2012, when I heard Jimbo Mathus' EP Blue Light, an excellent and interesting mix of genres, including country, rock and blues. And now his new full-length CD, Dark Night Of The Soul, is also a wonderful combination of musical influences. At times it is more in the rock category, but with lots of country influences as well. Jimbo Mathus’ vocals are full of emotion and power and humanity, and it is often his vocals that drive these songs. This album certainly starts off strong, but many of my favorites are the later tracks, and the CD’s final track is something I can’t seem to shake from my head.

The album begins with its title track, “Dark Night Of The Soul,” which opens with some really nice, sweet work on piano. And when Jimbo Mathus’ vocals come in, they have a gorgeous, raw, emotional feel (the first moment reminding me of Steve Perry’s most heartfelt moments with Journey). “Dark night of the soul/Take me to your sweet solution/Bathe me in your absolution/Dark night of the soul.” Then the song kicks in, but still has a loose, strange feel, which I really like. There is something wonderfully untamed about the song’s energy. And then toward the end, we return to the sweet piano.

“White Angel” has a raw rock vibe, with something of a southern rock thing happening and some good work on electric guitar. What I love is this sort of unpolished delivery, particularly in the louder sections of the song, almost like he has something he needs to get across and perhaps just one take in which to do it.

“Rock & Roll Trash” is more firmly in the rock and roll vein, with a nod to Velvet Underground in the line “dance to the rock and roll station.” Then “Shine Like A Diamond” is a love song about how the right woman can turn a man’s life around, make things right. The opening lines are, “I was worried one time/I’m not worried anymore/From the minute I saw you walk through the door/I said to myself/When I first laid eyes on you, girl/You shine like a diamond and you’re my girl/You shine like a diamond and you’re flawless like a pearl.” Perfect, right? This is one of my favorite tracks. There is another Velvet Underground reference (“sweet nuthin’”), plus a Van Morrison reference at the end.

Another of my favorites is the album’s following track, “Writing Spider,” which has more of a country rock feel. There is something really catchy about this tune. The last lines are, “I’ll open the door for anything/Just far enough to let light in/But I’ll close the door so many times/On all the trouble that I had back then.” The great country rock vibes continue with “Tallahatchie,” another highlight of this CD. I love the feel of this one, due in part to the fun work on piano (Eric Carlton is on keys on this album). And it has a reference to Canned Heat’s “Going Up The Country” in the line, “We’re gonna jump in the water and stay stoned all the time.”

“Fire In The Canebrake” has a slow, funky groove. This song during its instrumental section actually calls to mind Frank Zappa, but then vocally at certain moments makes me think of early ZZ Top. It’s a cool tune. And then “Hawkeye Jordan” has a good country rock vibe that at times reminds me of The Band. That one features more great work on piano and guitar, and I totally dig the vocal performance.

Another of my favorites is “Casey Caught The Cannonball,” which is more very cool country rock. I really love this tune. It has the feel of a down-home celebration, including some work on harmonica. “Take a fast train, baby, to ease my worried mind.”

Musically, probably the most arresting and haunting track is the album’s final song, “Butcher Bird.” Lyrically, it’s okay, but the sound of this song is fantastic, nearly hypnotic in a way, and might be my favorite track on the album. It will transport you.

Dark Night Of The Soul is scheduled to be released on February 18, 2014 on Fat Possum Records.
Posted by Michael Doherty at 3:50 PM