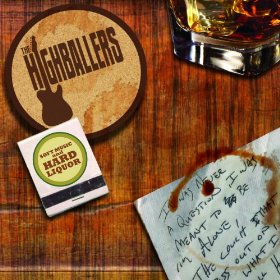 In “Doing Time In Pennsylvania,” Kendall Jackson sings, “I was made for raising hell.” That’s a good indication of the kind of straight-forward, foot-stomping country rock you’ll find on Soft Music And Hard Liquor, the first album by The Highballers. This is exactly the band you hope to stumble upon in some dive bar along the highways in the south. Except these guys are actually based in the nation’s capital.

It’s funny – I don’t often think about there being any music at all in Washington D.C. I think of music as being honest, as a way of communicating truth about the human condition, and so on. And politicians are the opposite of music.  It seems like they wouldn’t appreciate a good rhythm or lyric, and it’s hard to imagine those sad bastards cutting it loose on the dance floor, or even giving an honest smile. So I’m glad to learn there is some country in the country’s capital. Maybe there’s hope after all.

Though I suppose even politicians can relate to lyrics like, “It’s bound to get ugly/It’s bound to get loud/Because I take pride in my drinkin’” (as Kendall Jackson warns on one of this album’s tracks).

Not that all these tunes are boot-stomping drinking songs. There are some slower tunes, like the wonderful “Live To Let You Down,” with the lines “How I hoped and I prayed our love would turn around/But I live to let you down.” And there are even some sweeter moments on this album, like the song “Better Man,” an ode to a special woman. Check out these lyrics from that song: “She deserves much better than what I have given her/But still she smiles at me even when I’m wrong/So I sing about her/I can’t live without her/Try to fit her life into the words of a song/She ain’t perfect, but she’d like to be/She cusses like a sailor, wears her emotions on her sleeve/And she makes a better man of me.”

Soft Music And Hard Liquor opens with “Juneen,” a really good country rock tune with a nice, steady rhythm. Both male and female vocals tell the story of an interesting relationship, with lines like, “I keep you locked inside my home to keep temptations away/Well, I know one day you will understand all the rules you must obey.” And then: “I think anyone can see that you’re so damn crazy for me.” Though later the song presents a question we all must ask ourselves at times: “How can I have been so damn wrong?” “Juneen” features some nice work on lead guitar by Sean Lally.

There is more good country rock with “Doing Time In Pennsylvania,” a fun tune that has the required elements: fighting, drinking, jail time, and a twisted dash of optimism. “Tomorrow’s another life, lord/But I’m living for today/And the next thirty Sundays/Well, I found a place to stay/And that’s doing time in Pennsylvania.” Certain drinkers will relate to this line: “The whiskey was the only friend that never lied to me.” Yet this is a song to get folks up on the dance floor.  I particularly like the way the male and female vocals sound together on the title line, “Doing time in Pennsylvania.”

Everybody loves a bit of cross-dressing, even tough cowboys, as you’ll learn in “A Cowgirl Who Understands.” (Someday I’m going to put together a cross-dressing mix CD, and try to cover the spectrum as far as different professions, different social strata, etc.) The album’s title comes from the opening lines of this song: “Soft music and hard liquor/Short leather skirts and high heeled shit kickers/Little things that help a cowboy look like a girl.” There is, of course, something delightful in a country song about cross-dressing. This is a sort of love song, about a man and his passion for shoes, and is also a song of longing. The song makes a point of indicating that the man in question is straight: “Don’t go looking for a rainbow sticker on this truck/You won’t find one, he ain’t that kind of guy.”

“The Price You Pay” is a very cool country tune about taking someone’s life. “He just whispered, why/I’d have given you all I had/Why do I have to die.” Though “I Didn’t Mean To Get Drunk” feels a bit like more standard country rock fare. That one is not as interesting, but is still a song a drunk country crowd will likely enjoy.

The Highballers are Kendall Jackson on vocals and guitar, Victoria Patchen on vocals, Sean Lally on lead guitar, Michael Barrientos on bass, and Drake Sorey on drums.

Soft Music And Hard Liquor was released on January 15, 2013 on Woodshed Records.