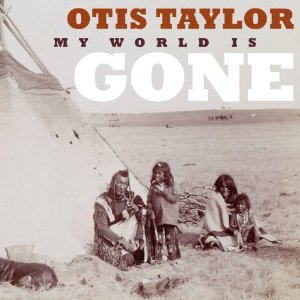 Otis Taylor’s new CD, My World Is Gone, is a collection of songs that seems to take us into the past while not being nostalgic or irrelevant. The themes are sometimes related to Native Americans and the destruction of cultures, but don’t worry – this isn’t a doom and gloom album. It’s not an album to ruin your mood, or bring you down. Partly this is due to the instruments Otis chooses with which to present his messages.  Otis Taylor has his own sound, combining banjo and cornet on “Sand Creek Massacre Mourning,” for example (that song also has some nice work on drums by Larry Thompson). This isn’t just blues, though he uses a familiar, traditional blues rhythm on a song like “The Wind Comes In” (though even on that one he uses banjo).

Most of these tracks are really effective. Only occasionally does Otis Taylor fall back on over-used, familiar images and statements. Like in “Never Been To The Reservation” he sings “They’ve got babies living in the street, and he’s drinking champagne.” Lines like that no longer elicit anger in the listener, no longer feel like a call to action. They’ve become too commonplace. But mostly he’s able to refrain from these sorts of lyrics, and to be original. For he really does have an original voice and sound. And what a voice.

All of the tracks on My World Is Gone were written and arranged by Otis Taylor.

“My World Is Gone”

The album begins with the title track, “My World Is Gone,” whose opening notes are so sweet and pretty, with fiddle coming in over the guitar. Then Otis Taylor’s vocals come in, his voice kind and wise, maybe a bit tired – a voice that has lived and seen much, a voice that speaks Truth, but not from on high, but rather from right next to you, with you. “If you send me a golden razor, oh, I’ll cut my hair.” I also really dig the guitar part, particularly on the lead sections. Anne Harris’ presence on fiddle really adds to the beauty of the song.

“Lost My Horse” is a bit more aggressive, with a good blues edge. It opens with these lines: “My daddy was a runaway slave/My momma was a Navajo/I’ve been drinking/Like my daddy do/I’ve been drinking/Like my daddy do/I done lost my horse/Oh, I’m sure to lose my mind.” This song features the great combination of electric mandolin and guitar. A different version of this song appeared on Otis Taylor’s 2001 release, White African.

“Huckleberry Blues” is one of the most interesting songs on the album, for it’s blues with a banjo, an instrument that seems somehow the opposite of the blues. And on top of that, there is this delicious horn – that’s Ron Miles on cornet. The result is a wonderful jazzy blues jam. I really love this tune.

“Blue Rain In Africa” has a sound that is simple and beautiful. This is a song that somehow gets right on top of you emotionally, without the help of a lot of lyrics. It seems to effortlessly tap into something deep within us, something to connect all of us. “There must be blue rain in Africa.”

“Green Apples” is a really cool jam. I dig that relentless guitar part, like it’s demanding and not going to give up until she agrees to treat him right. Otis sings, “Green apples in the morning/Red apples at night/Treat me right/Oh baby, treat me right.” This track also features wonderful work by Ron Miles on cornet.

“Sit Across Your Table”

My World Is Gone concludes with “Sit Across Your Table,” an upbeat, happy blues tune about being seated across the table from the woman you love.  Here is a taste of the lyrics: “When I wake up in the morning/And the world gets me down/Well, I look across my table/I see you, I see you/And I say to myself/Lord, I say to myself/A wonderful world/What a wonderful world/Wonderful world.” This is a great little gem of a song.

Musicians appearing on this release include Otis Taylor on vocals, guitar, electric mandolin, slide guitar, and banjo; Mato Nanji on vocals and guitar; Anne Harris on fiddle; Larry Thompson on drums; Todd Edmunds on bass and tuba; Shawn Starski on guitar; Ron Miles on cornet; and Brian Juan on organ.

My World Is Gone is scheduled to be released on February 12, 2013 on Telarc International, a division of Concord Music Group.

Posted by Michael Doherty at 3:38 PM