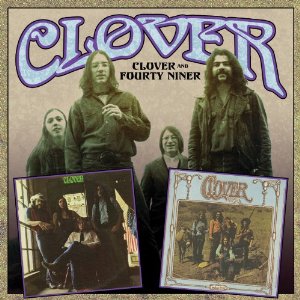 I still feel like I really missed out by not being in San Francisco in the mid to late 1960s. Not that I had a choice. I wasn't born yet. But since my very early teens, I've been drawn to the music that came out of that place and time. (I was 13 the first time I begged my parents to take me to a Grateful Dead concert - they refused, and three years passed before I finally saw that band.)  I am always excited when something from that time is released on CD, especially when it's something I haven't heard before, like these two records by Clover.

This is a band I knew absolutely nothing about. So it was a thrill when I put this disc in to immediately find myself groovin' to the music. There are some real gems on this CD.  And it turns out that although I hadn't heard this band, I'd certainly heard other stuff from these musicians. For example, John McFee was a member of The Doobie Brothers. And Alex Call wrote "867-5309/Jenny," which was on the radio approximately every fifteen minutes in 1982. John Ciambotti played with John Prine.  Other interesting notes about Clover: 1. Huey Lewis would later join the band, as would Sean Hopper (a member of The News); 2 the band would back Elvis Costello on My Aim Is True (1977). Insane.

The liner notes for this CD release were written by band member Alex Call, which is cool.

Clover, the band's debut album, opens with a fun, seriously groovy rendition of "Shotgun," a song by Junior Walker & The All Stars. Clover's version has a funky edge. There is some nice work on guitar during the short jam section.  They also add some of their own lyrics, like "You're walking down your street/And oh, what do you hear/There's music everywhere."  That's exactly the impression I have of San Francisco at that time.

"Southbound Train" is a cool bluesy tune with a nice instrumental section. It's about a man whose woman has left, and how he's dealing with it. "Around here there just ain't no hope at all."  And so, "I'm going down to the station, going to catch that southbound train/I'm going to bring you back home, or I ain't coming back again." And then the pace picks up, led by some great work both on piano and guitar. It's a really nice section, and I wish it went on a bit longer.

"Southbound Train" was written by Alex Call and John McFee.

"Going To The Country"

Going to the country always sounds appealing, and this song offers some good reasons for going: "The city is full of policemen/They've got one on every street" and "The air's so foul that I can't breathe." Of course, it's mostly city bands that sing of the virtues of the country. "Going To The Country" was written by John Ciambotti and Alex Call.

This album features a slow version of "Stealin.'" This is a song that a lot of the San Francisco bands did at that time, including the Grateful Dead. Clover's rendition has a country breat, and a sweetness to the vocals, particularly during the chorus. I've always loved this song, and this version has definitely grown on me.  It has a certain beauty.

"No Vacancy" is an unabashed straight country song. The first lines are "There's a room in your heart for every man in town/But there ain't no vacancy for me." Ah, one of those sad country songs about a guy who can't get the girl. I always think that if the girl in question just heard the song, all would be well. And maybe that's the point.  I always love the ridiculous metaphors that these weepy country tunes use.  "No Vacancy" was written by John Ciambotti.

"Lizard Rock And Roll Band" is a silly song about, yes, lizards in the desert playing rock and roll. It's totally stupid, but fun (reminding me of something Phish might do). Here is a taste of the lyrics: "They had a wizard lead guitarist, and the drummer kept the backbeat with his tail" and "When I went to pick him up, his tail came off in my hand." Nonsense, right?  But it is fun.

"Fourty-Niner," the title track of the second record, is an interesting tune. The rhythm is so simple and insistent. Their vocals sound particularly good on this track when they harmonize, on lines like "Runnin' around these hills, looking for that pot of gold/If you find it, you can keep it, because by then you'll be too old."  But it's the piano that really does it for me on this one.  "Fourty-Niner" was written by John Ciambotti and Alex Call. I'm not sure which of them is responsible for the misspelling.

My favorite track from the second album (and maybe the entire CD) is "Chicken Butt." Seriously.  I love it. It's a silly bluegrass country tune, and their vocals sound great. Plus, there is a fiddle. The song is just completely fun. Here is a taste of the lyrics: "Had me a goat and her name was Fred/Milked too much and now she's dead/Had me a horse and I called him Paul/Couldn't mount him because he's too tall." And yes, they make chicken noises at one point. This tune is glorious in its absurdity. "Come back, chicken butt."

Grateful Dead fans take notice: "If I Had My Way," a song by Reverend Gary Davis, is the same song that became "Samson And Delilah" when the Dead did it. This version by Clover has different lyrics.

CD Track List
This re-issue was released on July 31, 2012 through Real Gone Music.


Posted by Michael Doherty at 6:02 PM