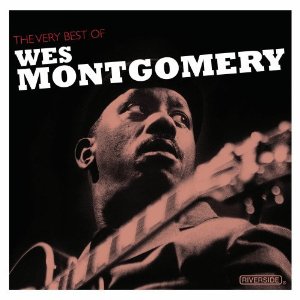 The Very Best Of Wes Montgomery features eleven tracks from his years on Riverside Records (1959 - 1963). I love listening to Wes Montgomery play guitar. There is something about his seemingly easy mastery of the instrument that raises my spirits. His playing feels like the natrual extension and expression of a good soul. He also surrounds himself with other excellent musicians.

This collection opens with "Groove Yard," the title track from The Montgomery Brothers' 1961 album. It's a groovy little gem featuring Buddy Montgomery on piano. It's interesting to start this collection with a song in which the piano is so prominent. But Wes Montgomery's turn at lead is wonderful. And that's Monk Montgomery on bass.

"Groove Yard" was written by pianist Carl Perkins (not to be confused the "Blue Suede Shoes" Carl Perkins).

"Besame Mucho" is such an interesting track, because while the guitar work is phenomenal, as you'd expect, the song has a strangely subdued quality, as if threatening to burst out at any moment. And nearly two minutes in, it does get louder, reaching another level, when the organ and guitar almost working as two parts of a lead. That's Mel Rhyne on the Hammond B-3 organ.

This tune, written by Consuelo Valasquez, is from Boss Guitar.

I'm always surprised at how many of Wes Montgomery's songs have such great grooves. This tune moves just right, you know? Of course, it doesn't hurt that it features Philly Joe Jones on drums (from The Miles Davis Quintet) and Sam Jones on bass (best known for his work with Cannonball Adderly).  And there is some fun work on vibes by Milt Jackson. But what really stands out is Wes Montgomery's incredible work on guitar. One of his lead sections is just amazing, and I only wish it were much longer. He's so generous in leads - the piano and vibes both get plenty of time.

"Delilah" was written by Victor Young, and was originally on Bags Meets Wes! (1961).

"West Coast Blues" was written by Wes Montgomery (three of his compositions are included in this collection). There are moments when you can year a rock and roll influence in this track (in later years, Wes would cover several rock tunes).  I also dig Percy Heath's work on bass.  This is from The Incredible Jazz Guitar Of Wes Montgomery (1960).

The second of the three Wes Montgomery compositions, "Four On Six" has a fantastic and seriously catchy rhythm during the first section of the song, which I completely love. It's like some kind of new delightful musical vehicle approaching. And that leads into Wes Montgomery's lead, a section that is sometimes playful, sometimes stunning, but always wonderful. There is a nice lead by Tommy Flanagan on piano, and then even a welcome lead section by Percy Heath on bass before going back to that great opening section.

"Four On Six," probably my favorite track from this collection, is also taken from The Incredible Jazz Guitar Of Wes Montgomery.

"Sandu" is a completely delightful tune written by Clifford Brown. This track features great dialogue between Wes Montgomery and Sam Jones on bass (following a wonderful bass solo). This is a seriously fun track with a different feel from the rest of the album. This tune was originally included on Movin' Along.

The Very Best Of Wes Montgomery concludes with the third Wes Montgomery composition, "Cariba." It's a somewhat strange tune, with a bass solo coming within its first minute. "Cariba" is only live recording of the collection, and also the only track to feature a horn. That's Johnny Griffin on tenor saxophone. "Cariba" is a bright, happy tune, originally included on Full House (1962).

Posted by Michael Doherty at 3:02 PM