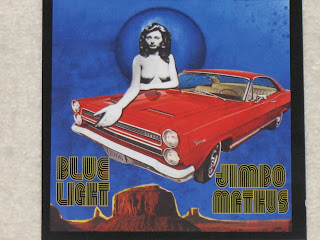 Vinyl is making a comeback, thanks in part to Record Store Day, when tons of exclusive new material, as well as the re-issues of classic albums, are put out solely on record (through independent stores and then later at much higher prices from greedy, callous online dealers).  Another indication of the resurgence of vinyl's popularity is the release throughout the year of EPs and LPs of new material, including the new six-song EP from Jimbo Mathus.

Like a lot of folks, I know Jimbo Mathus primarily from his work with that fantastic old-timey-sounding band Squirrel Nut Zippers (in which he played guitar, shared lead vocal duties, and wrote a number of the songs). Boy, those guys put on a great concert.  Because of my love for that band, I had fairly high expectations when I put on his new record, Blue Light.  I also expected that the music wouldn't be tied too tightly to any one musical genre.  Beyond that, I wasn't sure what to expect.

The tracks on Blue Light are, as I'd hoped, an interesting mix of genres.  What surprises me is just how at home he is in each musical realm.  Each song makes it seem like he's been playing just that type of music (and no other) his whole life.  This is a very impressive and seriously fun collection of songs.

The album opens with its title track, a loose kick-ass driving country tune.  And it's sung with an authentic country voice. This song sounds like something from a honky tonk bar in the 1970s. That's to say, I totally love it.  I particularly dig the piano. Here is a taste of the lyrics: "The worst is what happened/Last Saturday night/The road runs down from the Tennessee hills/All the way to Mobile/Called Highway 45/Tupelo in the dead of night/That's where I saw the blue light." The song sort of fizzles out at the end, sort of matching the way it eased in at the beginning.

Jimbo Mathus follows up the country tune with "Ain't Feelin' It," a groovy bluesy rock number with a simple rhythm. It's wild that he can create a totally authentic country sound, and then turn around and give us a true and honest blues number. Very cool. Here is a bit of the lyrics: "Keep my name out your mouth/Lose the number off your phone/Stay away from my house/Baby, you deserve to be alone."

"Haunted John" has kind of a late 1960s garage flavor to it, and is maybe my favorite tune on this record. It has a great catchy rhythm. Sure, the lyrics are nothing really to speak of, but it's such a cool tune. And it's the kind of song that seems like it would be fantastic in a live setting. And guess what - Jimbo Mathus is on tour now.

Okay, the beginning of "Fucked Up World" sounds a bit like a section of the Grateful Dead's "Hell In A Bucket."  Seriously.  Give it a listen.  But once the vocals kick in, it no longer reminds me of that tune.  This is a tough, angry little number that I can't help but like.  This one starts, "Well, there ain't no grave/No, I ain't no slave/There ain't no chain gonna hold my body down."

The very beginning of this song makes me sing "Shimmy Shimmy Ko-Ko Bop" (It will do that to you too. Or maybe not). This one has a bit of a Stax feel. You can just imagine Booker T & The MGs playing this one. "Sometimes I wonder how can I get free/From these shackles of love, these chains of devotion/That's what's holding me."

Blue Light concludes with "Burn The Honky Tonk," a great late-night country tune, a closing time, weep-in-your-warm-beer kind of song. It has a loose, unpolished feel, which I appreciate.  "Oh, sweet dark angel of night, please take me home."

Posted by Michael Doherty at 2:58 PM