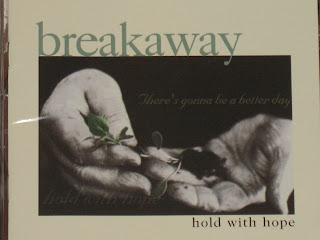 The album features excellent vocals. And these guys are damn good musicians who can draw you in with the slower songs and impress you with the obligatory displays of manic joy that are an inherent (and delicious) part of bluegrass music, mostly in the instrumentals.

Breakaway opens this album with "Pastures Of Plenty," a Woody Guthrie tune. You can never go wrong opening with a Woody Guthrie cover. And yes, it's true that Woody Guthrie was a folk musician, not a bluegrass player, but there is nothing wrong with taking a song from another genre and playing the heck out of it bluegrass-style. (Think of the many songs that Yonder Mountain String Band has covered over the years, like Ozzy Osbourne's "Crazy Train.")

I really like Breakaway's rendition of this song. Scott Hopkins stands out on banjo. And Paul Miller does a good job on vocals (of course, you have to keep Woody Guthrie's unique voice out of mind while listening to it). All in all, it's a good, energetic start to the album.

"Water's So Cold," written by Harlan Howard, is sweet, slow, beautiful. The vocals blend perfectly. I love it when the voice sounds so pretty while the words themselves are sad or even harsh; after all, this is a song about drowning, and the implication is that it's also a suicide. The vocals are beautiful on the line, "The water's so cold, as cold as your heart." But my favorite lines are these: "I offered my hand and I offered my name/She said you're a child, she put me to shame/If she saw me now she'd have to agree/No child could swim this far out to sea." Pete Riley sings lead on this one, and I really like his voice.

"Snowshoe" is an instrumental written by banjo player Scott Hopkins. And the banjo drives a good section of this song. But this is bluegrass, and no instrument is allowed to remain dominant for long, so the others get a chance at lead. This is definitely a tune to brighten one's spirits. It might not get you dancing, but it will certainly make you smile.

Breakaway does a beautiful instrumental rendition of The Youngbloods' "Darkness, Darkness." This song starts off nice and slow, to pull you in. Forget trying to accomplish some other task while this song is on. Just sit down and listen. When it has you, it picks up a bit in pace, and of course loses nothing of its beauty. Gene White, Jr.'s work on fiddle is wonderful, acting like an earnest human voice, toward the end sounding like a beautiful woman calling to you from a hilltop. This is one of my favorite tracks.

"Old, Old House" is a wonderful, sad song written by George Jones and Hal Bynum. I love these lyrics: "They say he built the mansion because of a woman/And they planned to be married in the fall/But her love withered in the last days of summer/And the house stands empty after all."

"One Time, One Night"

Breakaway does a bluegrass version of "One Time, One Night," a Los Lobos song. And it totally works, not being too much of a stretch from the original version, which had a definite country feel. "One Time, One Night" was the opening track of their 1987 release, By The Light Of The Moon. Los Lobos are a phenomenal band, and Breakaway does a really good job with this song. Peter Riley, Paul Miller and Taylor Armerding take turns at lead vocals.

"Chenango County Blues" is a fun instrumental written by Scott Hopkins. This is the kind of song that most people are thinking of when they think bluegrass. I love the fiddle section on this one.

Hold With Hope concludes with its title track, a song written by bass player Peter Riley. It's a positive song, marred for me only by its religious sentiment ("Trust in Him and you'll find the way").

Breakaway is Scott Hopkins on banjo and harmony vocals, Paul Miller on guitar and vocals, Peter Riley on bass and vocals, and Gene White Jr. on fiddle and mandolin. Joining them on this recording are Taylor Armerding on mandolin and vocals, and Junior Barber on resophonic guitar.

Hold With Hope was released July 25, 2000 through Gadfly Records.
Posted by Michael Doherty at 1:51 PM