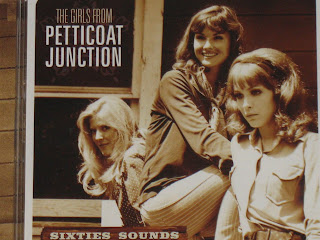 Petticoat Junction was a popular television program that aired from 1963 to 1970. At the center of the show were three sisters: Betty Jo Bradley, Bobbie Jo Bradley and Billie Jo Bradley. Betty Jo was played by Linda Kaye Henning for the run of the series, but the roles of Bobbie Jo and Billie Jo were each played by more than one actor. Lori Saunders joined the cast as Bobbie Jo in 1965, and Meredith MacRae took over the role of Billie Jo in 1966. So it was these three actors who went into the recording studio in the spring of 1968. Two singles resulted from these sessions, and those songs (including the flip sides) are featured on Sixties Sounds.

The plan had been to record a full-length album, but the singles didn't boast enough sales, and those plans were scrapped. So the other tracks from those sessions weren't released. Until now. This CD includes four previously unreleased tracks. Rounding out this collection are the two sides of a single released by Meredith MacRae in 1967, as well as the Petticoat Junction theme song by Curt Massey.

This album feels very much a product of its time, and that's not a bad thing. It has that 1960s bubblegum pop feel, but of course with folk elements too. I have to admit I'm kind of a sucker for this stuff. Just to be clear, I love that song that goes "Yummy Yummy Yummy, I've got love in my tummy." I also dig Petula Clark. So there. I have to say I've never seen Petticoat Junction, so this music holds no personal nostalgic value for me. So I'm enjoying it on its own merits.

"If You Could Only Be Me"

The album opens with "If You Could Only Be Me," which is joyously cheesy 1960s pop. This is the kind of song that intellectually you want to disparage, but somehow on a more instinctual level you end up totally loving. It has a ridiculously happy vibe, with positive lyrics like, "Just to show the whole wide world how very proud I am of you/If you could only be me/For one brief moment you would see/Just how much I love you, baby/And how it feels to know that you love me." It even has some well-placed "la la las."

This song was the flip side of the first single from The Girls From Petticoat Junction, "I'm So Glad That You Found Me," which was released in August of 1968. "If You Could Only Be Me" was written by Roger Atkins and Carl D'Errico, and was performed in the episode "Singing Sweethearts," which aired on October 5th, 1968.

"Wheeling, West Virginia" is a song about a former small-town girl who is now an actor in Los Angeles. Of course it seems a natural song for a television program, and yet it was actually not featured on the show. Written by Neil Sedaka and Howard Greenfield, this song features lines like, "Racing my MG down to MGM/Sitting in makeup, trying to wake up/Got to be on the set at 8 a.m./It's one more day of make-believing/One more day of playing the star/One more day of endless pretending/Do you know who you are?" This is another song that you can't help but love. It has such a bright, boppy feel, and with lyrics that actually matter. Really. And their voices blend well on this track. This is my personal favorite of this CD.

"Wheeling, West Virginia" was the second single by The Girls From Petticoat Junction, this one released in January of 1969.

I'm not sure what to make of their cover of The Beatles' "Rain." "Rain" is a song I love, but this version is missing the bite of The Beatles' original. It's tame, sweeter, and feels more like a folk song. Sort of like a Byrds version of a Dylan song. It's nice, sure, but you feel like you're being denied something. Lori Saunders sings lead on this one. This is one of the tracks that was previously unreleased.

"I'm So Glad That You Found Me"

"I'm So Glad You Found Me" is the A-side of the group's first single. It's more positive pop, though to my ear slightly less effective than its flipside, "If You Could Only Be Me." This song was featured in the "Bye, Bye Doctor" episode, which aired on December 7th, 1968. "I'm So Glad That You Found Me" was written by Buzz Clifford.

"Up, Up & Away" is a song written by Jimmy Webb in 1967, and famously recorded by The 5th Dimension. It seems the perfect song for this group to perform, with its insanely positive outlook and vibe. The rendition by The Girls From Petticoat Junction sounds quite similar to the other, more well kown version. This is one of the tracks that was previously unreleased. Linda Kaye Henning sings lead on this song.

"Get Together" is a song most famously done by The Youngbloods in 1967, but was previously recorded by The Kingston Trio. This version by The Girls From Petticoat Junction takes a little getting used to, but it's grown on me. It has a really interesting arrangement, quite a bit different from the version everyone knows. It feels a bit more serious, which is actually a surprise, and it then has a nice harmonica section. But what I really like is the way they approach the vocals to this song. This track was previously unreleased.

Sixties Sounds concludes with "Petticoat Junction," a song written by Paul Henning and Curt Massey. Recorded by Curt Massey, it was released as a single in 1964, and features the lines, "Lots of curves, you bet/And even more when you get/To the junction/Petticoat Junction." This is the full version, including the verse not heard on the television program. The three girls do not appear on this recording, which is why it's listed as a bonus track.


Sixties Sounds was released through Real Gone Music on November 8, 2011.
Posted by Michael Doherty at 3:02 PM