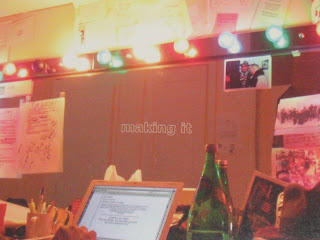 I first heard Stew & The Negro Problem several years ago on KPFK, here in Los Angeles. There is a program on that radio station called The Music Never Stops which, as you might guess, is largely a Grateful Dead show. But the program's host, Barry Smolin, uses the first section of the show to showcase newer recordings by jam bands. And it was during that opening section that The Negro Problem first caught my ear. They did not fit into the typical "jam band" category. There was something else going on here. Honestly, I didn't know quite what it was, but I knew I liked it.

A lot of jam band music works on an emotional, intuitive level, and The Negro Problem certainly can thrive on that level. But there is also something more intellectual about Stew & The Negro Problem, something more thoughtfully designed. Lyrically, they're often closer to the singer/songwriter genre. That is to say, the lyrics truly matter.

And the lyrics are often funny. Toward the end of "Therapy Only Works If You Tell The Truth," the therapist coldly repeats, "When did you first notice there was a problem in the relationship?" Until finally the answer comes, "Oh, when she left me." And that's how the song ends.

The album opens with its title track, a groovy rock instrumental with some delicious madness on drums, feeling almost like the end of an extended jam. It's just under two minutes long.

"Pretend" begins as a mellower, jazzy journey before the vocals come in. Sometimes when you're having trouble, it's not the complex, artsy tune that helps, but that familiar, innocuous song. In "Pretend," Stew sings, "I need a stupid song to pull me through/Like a childhood dog when you had the flu." But this song itself is not the stupid song he's seeking, not with lines like "Truth was more than you deserved." And I love these lyrics: "But stupid little songs always stay true/And when times get hard, they stay with you/And when times get tough, the song does too."

"Black Men Ski" is a humorous song that plays with stereotypes. Here is a taste of the lyrics: "Black men now are students of gay sensibility/Wear ironic T-shirts drenched in code unknown to thee/Get baptized in Walden Pond amongst a searing mob/The cleansing blood of Jesus could not do a thorough job/So black men ski." Yes, this song is funny. (And is it "thorough" or "Thoreau"?) But don't let your laughter keep you from hearing the song's message, which you might hear in lines like "Some kids I'll describe as friends say I am race-obsessed/The luxury of that opinion shows that you are blessed."

There are so many songs about relationships ending. But what others are so direct and yet so poetic at the same time? Check out these lyrics from "Curse": "And now you don't need a new girlfriend/What you need is a nurse/We won't flag you a taxi/We'll just hail you a hearse." And then there is the repeated line, "Ask her to lift the curse." Heidi then comes in and sings the opening lines.

"Speed" begins with some soft playing on guitar. In this tune about methamphetamine, Stew sings, "My body was so resilient/Everything I said was brilliant/And it seems to fulfill a sincere artistic need." There is something of a 1960s rock feel to parts of this song, particularly when it kicks in (that bit reminds me especially of a certain section of The Who's "A Quick One While He's Away"). This all leads to a joyous cacophony toward the end (like jazz eating rock, or possibly rock eating jazz).

"Tomorrow Gone" begins with an easy-going reggae beat - sort of like reggae out on the range. This song has a really sweet sound, with their vocals blending beautifully. The first time I listened to this album, this is one that really stood out. I immediately loved it. And this is one of the lines that caught me: "You ain't got to be ignorant to want some bliss." And then "Tomorrow Gone" eases into this delicious New Orleans-flavored horn section. This song itself is bliss.

"Leave Believe is a sad acoustic songs that starts, "It took a little while for me to see/You stopped believing in me/I wasn't left with much to do/So I stopped believing in you." How's that for getting right to the heart of things? The song needs no other lyrics. First Stew sings the lines, then Heidi has her turn (as in "Curse"). And it's crushing - that they both feel the same way, and yet are so isolated. And then the song kicks in with a surprising force. This is one of my favorites.

The album ends with "Treat Right," which has something of a 1970s groove. This is a song about writing songs, and finding therapy in song (and songwriting). It seems a lot of songwriters try to work out their relationship problems in song. And as Stew sings, "And if it don't work, we'll write a song about that too." That's a good, positive spin, eh? I love these lines: "I tried to write a tune about you and me/To turn a mystery into melody."

Stew & The Negro Problem are Stew on noisy guitar and pillow talk (yes, that's how he's credited in the liner notes); Heidi Rodewald on vocals, bass, melodica and guitar; Marty Beller on drums and marimba; Mike McGinnis on reeds and winds; Joe McGinty on keyboards; Joe Spurney on guitar; Brian Drye on trombone; Jeff Hermanson on trumpet; Jacob Garchik on tuba; and Urbano Sanchez on percussion.