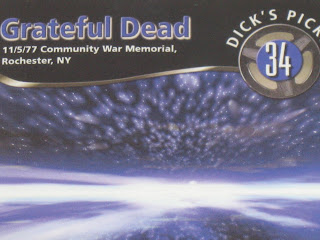 There are two years that really stand out as far as Grateful Dead concerts tapes are concerned: 1973 and 1977. Those years saw the band doing some incredible jams. And there was often a lot of beauty to those musical explorations. But they also weren't afraid of getting loud and even dissonant, of really going for it. In 1977, the band seemed to have a renewed energy. They had taken most of 1975 off, as well as the first half of 1976. But by 1977, they were going full-steam ahead. Song selections were good too. Some older material was getting a fresh spin. Songs like "New Minglewood Blues" and "Dancing In The Street" come to mind as examples. And their new material at that time was among the best the band ever wrote - "Terrapin Station" and "Estimated Prophet" being obvious stand-outs.

Dick's Picks Volume 34 actually contains two incredible versions of "Estimated Prophet," a song written by John Barlow and Bob Weir, and featured on the band's 1977 studio release, Terrapin Station. In later years this song would often be paired with "Eyes Of The World." But on these recordings it is paired with "St. Stephen" and "He's Gone."

Dick's Picks Volume 34 contains the complete show the Grateful Dead performed on November 5, 1977 at the Community War Memorial in Rochester, New York. It also contains a good chunk of the concert from November 2, 1977 (three songs from the first set, and four from the second set).

That's a good way to open the show, but it's the second song that really stands out on the first disc. I usually think of "Mississippi Half-Step Uptown Toodeloo" as a relatively mellow song. It's got this great easy groove, and a pretty ending section. But the version included on this disc has so much more. It has an excellent vibe, and tremendous energy. Jerry's guitar part during the jam soars. It's hard to believe that the concert had only just started - this is the kind of playing the band often had to work up to over the course of the night. This is absolutely one of the best versions of this song the band ever performed.

Drummers Bill Kreutzmann and Mickey Hart are more prominent than usual on "Looks Like Rain," which makes the song a little more vibrant than normal. This is not a mellow version, but it still retains its beauty.

After "Looks Like Rain," there is some stage banter about people being squashed up front, something that would sometimes happen at Dead shows. "The people up in front are getting smashed horribly again. If everybody on the floor could sorta try to move back, it would be helpful." "It's hard for us to get off seeing smashed human bodies up here, you know what I mean?" That leads into "Dire Wolf," with its refrain of "Please don't murder me" being comically apt.

The band then does a great pair of country covers: Merle Haggard's "Mama Tried" and Johnny Cash's "Big River." These are lively, fun versions, particularly "Big River," which should get you dancing. At the end, you can hear an audience member repeatedly screaming out a request for "Samson And Delilah." He's have to wait until the second set for that one, and besides it was Jerry's turn at lead vocals, so the band went into "Candyman," from the band's 1970 release American Beauty.

The first set is rounded out with the always-appreciated "Jack Straw" and a fun version of "Deal," a song that Jerry Garcia often played as a first set closer.

The second disc (and second set of 11-5-77) oddly starts with a solo on bass by Phil Lesh, with the drummers coming in partway through. And clearly the folks up in the front were still getting squashed, because the band did its "Take A Step Back" bit before actually going into its first song of the set.

The second set really starts with one of the band's best songs, "Eyes Of The World," originally included on its 1973 studio release, Wake Of The Flood. This is a song the band would often stretch out on, which is part of what made it a favorite. But also the lyrics really spoke to the Dead fans, especially lines like "Wake up to find out that you are the eyes of the world" and "Sometimes we live no particular way but our own/Sometimes we visit your country and live in your home/Sometimes we ride on your horses/Sometimes we walk alone/Sometimes the songs that we hear are just songs of our own." Beautiful.

That guy who was shouting earlier must have been excited when the band segued into "Samson And Delilah," led by Bill and Mickey. And he must have been even more excited as the song progressed, because Bob Weir's vocal performance is wonderfully intense and energetic. And Jerry's guitar is basically screaming with joy during the jam.

Jerry brings it down a bit with the pretty and sweet "It Must Have Been Roses."

"Estimated Prophet" is another of the Dead's best tunes, and this version from November 2nd is really good. The jam is loose, but with that great groove that "Estimated" is known for. Jerry Garcia does some really interesting stuff on guitar, especially starting around eight and a half minutes in. That leads into one of the band's most beloved songs, "St. Stephen" (a song the band stopped playing in 1983). As was typical in those years, the last section of the song was cut, and the band went right into "Truckin'." "Lately it occurs to me what a strange long strange trip it's been."

As wild as this version of "Truckin'" is, it's the next tune, "Around And Around," that's really surprising. Generally, the Dead's Chuck Berry covers were fairly breezy. But this one clocks in at approximately eight and half minutes. It starts off really quietly, and slowly. Usually it was the songs that Jerry sang that would get slowed down during these years when heroin was a big factor. But this version of "Around And Around" feels slow. Was Bobby trying to push it, trying to drive it? It's hard to tell, but suddenly at around the four-minute mark the song speeds up tremendously. From heroin to amphetamine in a heartbeat. And Donna's presence in this song is wonderful.

The third disc returns us to the main concert, November 5, 1977. And we get our second rendition of "Estimated Prophet." This jam is really different. It has almost a reggae feel, especially around the seven-minute mark, and is pretty mellow. It's interesting how one song can have two such different feels, only three days apart. But that's the Grateful Dead for you - you never knew quite what direction they'd take you. And perhaps because of its mellower mood, this song led easily into "He's Gone." I always love that beautiful vocal section at the end of the song. It got crazier in the days of Brent Mydland, but had a wonderful groove in these days of Keith and Donna.

"He's Gone" leads into "The Other One," which begins with a short drum solo (titled "Rhythm Devils" at the time, but later simply referred to as "Drums"). And actually, it's not even a drum solo, because Phil is present on bass. Really, this track should be combined with the following one, which is labeled "The Other One" because it is the intro to that song. "The Other One" is a truly interesting song. It's a segment of a much longer piece titled "That's It For The Other One," which was featured on the Grateful Dead's 1968 release, Anthem Of The Sun. On that release, this segment was titled "The Faster We Go, The Rounder We Get." But in concert it became simply "The Other One." There are some incredibly dark versions of this song, and some delicate versions. But this was another song that the band often stretched out on, finding all sorts of places to go. The lyrics have references to Neal Cassady (Dean Moriarty in On The Road) and Furthur (Ken Kesey's bus). The most interesting section of the rendition included here starts approximately eight and a half minutes in.

"The Other One" leads into a moving rendition of "Black Peter" and then the second set closer, "Sugar Magnolia." This version of "Sugar Magnolia" has a nice long pause before the "Sunshine Daydream" section. And then, because November 2, 1977 was a Saturday, the encore was "One More Saturday Night."

The final two songs of the third disc are more "filler" from the first set of November 2, 1977: "Lazy Lightnin'" into "Supplication." Donna is gorgeous on this version of "Lazy Lightnin'."

The Grateful Dead at the time of this recording were Jerry Garcia on vocals and lead guitar, Bob Weir on vocals and rhythm guitar, Phil Lesh on bass and vocals, Keith Godchaux on keyboards, Donna Jean Godchaux on vocals, Bill Kreutzmann on drums, and Mickey Hart on drums.

This re-issue was originally scheduled to be released on November 15, 2011, but was actually released a week later on November 22nd. Also re-issued at the same time were Volume 35 and Volume 36.
Posted by Michael Doherty at 2:17 PM