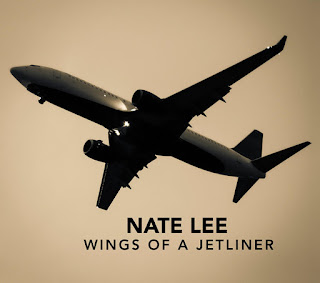 Nate Lee is a singer and mandolin player, known for his work in The Becky Buller Band. On his new solo album, Wings Of A Jetliner, he is joined by the other members of that band on certain tracks. The disc features a combination of covers and original instrumental tunes, largely alternating between the two. On most tracks Nate plays mandolin, but on a few he also plays fiddle and banjo. Bluegrass music for me has always seemed to have an inherent power to raise our spirits and push away the darker elements of reality, and we could all use some of that right now.

Wings Of A Jetliner opens with a good instrumental number, “Wonderbat,” an original composition by Nate Lee. Joining Nate on this one are Todd Phillips on bass, Wyatt Rice on guitar, Bronwyn Keith-Hynes on fiddle, and fellow Becky Buller Band member Ned Luberecki on banjo, each musician taking a turn at lead, as is the way in bluegrass. This is a fun tune to get things started. It’s followed by “Tobacco,” a song written by Daniel Salyer. In addition to mandolin, Nate Lee provides the vocals, and is joined by Becky Buller on vocals and fiddle, and their voices sound great together. And actually the entire Becky Buller Band plays on this track – Dan Boner on guitar, Daniel Hardin on bass, and Ned Luberecki on banjo. This song takes place in the late 1800s, and is about an independent farmer facing tough times and persevering. We then get a sweet, light, cheerful instrumental tune titled “Quick Select,” another original composition. This one features some nice work by Bronwyn Keith-Hynes on fiddle.

“Somewhere Far Away” is a pretty number by Bradford Lee Folk And The Bluegrass Playboys, and was the title track to that band’s 2014 release. This song also provides this album with its title in the lines, “I like the lights on the wings of a jetliner/As they blink out, and they cut through the cloud cover/Makes me feel like I’m somewhere far away.” Nate Lee delivers a really sweet vocal performance here. I am also particularly fond of Ned Luberecki’s work on banjo on this track. And I think a lot of us can relate to these lines during these days of isolation: “The way that I feel when I’ve had a few in me/Makes me feel like somewhere far away.” Ah, yes. This is one of my personal favorites. “Serenity” is an instrumental track that has something of a lively feel to it, a tune that breathes, and features some excellent work on guitar by Wyatt Rice. Nate Lee plays both mandolin and fiddle on this one, giving us a chance to appreciate his skill on fiddle. Thomas Cassell also plays mandolin on this track. Then Daniel Hardin on bass gets this version of “All Along” going. This is one of those wonderful fast-paced bluegrass tracks, and Becky Buller joins Nate Lee on vocals again. This is another track to feature the entire Becky Buller Band, and everyone gets a chance to really shine on this one. I particularly like the work on banjo and guitar. This song was written by Bryan Holland, and originally recorded by The Offspring. As you might guess, this version has quite a different vibe.

There is something rather adorable and delightful about Nate Lee’s instrumental “Come Along Brown Dog.” The mandolin is really featured here, the only other musicians being Daniel Hardin on bass and Becky Buller on fiddle. This tune has a somewhat easygoing vibe, but also its own distinct beauty, and it ought to give you a smile. This ends up being another of my favorites. It’s followed by “Miner’s Grave,” and as you might guess from that title, it has a more somber tone, particularly at the beginning, the fiddle providing a more pensive sound. Nate Lee plays banjo on this track. Daniel Salyer joins him on vocals for this one. “Miner’s Grave” was written by Ashleigh Caudill. Then “Rook Roller” is the final instrumental track of the album, and it’s a fun one. Nate Lee is back on mandolin, and provides some wonderful stuff.

“The More I Pour” has more of a classic country sound, and features Nate Lee, Bronwyn Keith-Hynes and Dan Boner all on fiddle. Joining Nate Lee on vocals on this one are Dan Boner and Daniel Salyer. “The more I pour, the less I care/The more you drive me to despair/There’s no use in keepin’ score/The less you care, the more I pour.” Yes, it’s a good drinking song. Though, honestly, as I’ve said before, every song is a drinking song if you listen to it correctly. “The More I Pour” was written by Tim Stafford and Mark Bumgarner. Then “Sweet Allis Chalmers” mentions drinking as well: “I wish I was drinkin’ a bottle or two/And lovin’ some sweet thing instead.” This one was written by Bill Caswell, and features Becky Buller and Dan Boner on harmony vocals. The album concludes with “Love Medicine,” in which Nate Lee sings “Life gets hard and we get better.” Now that’s a line we ought to keep in mind these days, eh? This song was written by Chris Sanders.

CD Track List
Wings Of A Jetliner is scheduled to be released on June 12, 2020 on Adverb Records.
Posted by Michael Doherty at 7:14 AM