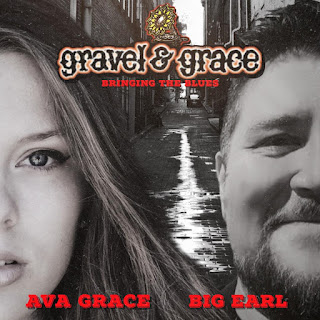 Gravel & Grace is a fairly new blues band led by vocalists Ava Grace and Earl Matthews. On their debut studio release, Bringing The Blues, they alternate lead vocal duties, with Ava Grace taking the odd-number tracks, and Earl Matthews taking those with even numbers. They are backed by Isaac Lewis on guitar, Ricky Galvan on guitar, Joshua Broom on bass, Ray Vazira on drums, William Melendez on saxophone, and Bart Szopinski on organ and piano. The songs on this release are mostly originals, mixing blues with elements of other genres of music to create an enjoyable and vibrant sound.

The album opens with “Scares Me,” which was written by Earl Matthews, Ava Grace Merchant and Ray Vazira. It starts off as a cool blues tune, with Ava’s powerful vocal performance drawing us in immediately. “Yes, it scares me, baby, when you talk to me that way.” Is she really only seventeen years old? Then, once it kicks in, this tune has a disco feel, which comes as a delightful surprise. Plus, there is some good work on sax over that fun rhythm, helping to make this a totally enjoyable way to kick off the disc. It is followed by “Next Move,” written by Earl Matthews and Ray Vazira, with Earl on lead on vocals. “Well, work’s been slow lately,” he sings, which to me seems to be the understatement of the month. Yet this song ends up being a positive number, with a groovy rhythm. “Well, I’ve gotten this far/And I can go a little more/To try to figure out my next move.” Yup, that sounds about right. Seems like how we all are approaching the world these days, right? This track features some nice work on sax, especially during that lead section, and a good guitar part too.

Grace then sings lead on “Bottles,” a slower, soulful number that she wrote. I love that moment when the saxophone rises up to punch a hole in the darkness and lead us all out. It sounds so good. This song develops into a powerful track. That’s followed by “When I’m Hungover,” which has a sweet, cheerful vibe, particularly because of that work on acoustic guitar, and has more of a country sound. Earl is on lead vocals. “But all the whisky in this town/It couldn’t even start to drown/These lonely voices that I found/Saying I want you back.” Yet, on those lines, he is joined by Ava on vocals, lessening the sense of loneliness of the lines. Ah, to be lonely together. That’s followed by “Love On The Brain,” the album’s only cover, originally included on Robyn Rihanna Fenty’s 2016 release, Anti. On this rendition by Gravel & Grace, they punch up the song’s 1950s doo-wop vibe, which is wonderful. Ava sings lead on this track, and I love when her voice and the saxophone rise together. There is something kind of sexy about this track.

At the beginning of “Sunday Afternoon,” Earl Matthews sings “Let’s get together and have a real good time/You bring your friends, and I’ll bring mine.” Oh, that sounds so good. I wish we could get together. This track has something of a smooth jazz vibe at the start, and then when it kicks in, it has the feel of some glorious gospel number, featuring some great lively work on keys. Oh yes, this certainly is a celebration. You might almost forget that we’re in the middle of a pandemic while listening to it. I am looking forward to the time when we can get together, have parties, have jams, have something to celebrate. This too shall pass, right? That’s followed by “Not About A Boy,” with Ava on lead vocals. Here she delivers an interesting and compelling vocal performance, and at one point the band drops out (apart from the bass player) so that we can focus on her voice. It is a moment of intimacy and vulnerability. That moment is followed by a delicious lead on saxophone. This song also features some wonderful bluesy guitar work in the second half of the track. The song’s title of course reminds me of that Hugh Grant movie About A Boy. It is followed by “Picture Perfect,” another song whose title reminds me of a movie, this one starring Jennifer Aniston. This song is another lively number, with a New Orleans flavor. I love that work on keys, which seems to fly right out of my stereo speakers. And check out these lyrics: “She’s picture perfect, but practically insane/Yeah, that little girl, she’s so pretty/Pretty crazy is what I mean.” Oh yes, I think I dated her too. And is that a cha-cha-cha ending? You bet!

“Pennies” is a song written by Ava Grace Merchant, and it was chosen as the first single from this album to be released. This one too has a great energy, especially in Ava’s vocal performance, with more of a pop vibe and a bit of a 1980s flavor. “I know this song/Used to make you cry/So I kept the melody/And rewrote all the lines.” The album then concludes with “Wash My Blues,” written by Earl Matthews and Ray Vazira. This one too has something of a pop vibe, with some soul flavor and another wonderful lead on sax.

CD Track List
Bringing The Blues is scheduled to be released on June 19, 2020.
Posted by Michael Doherty at 11:45 AM