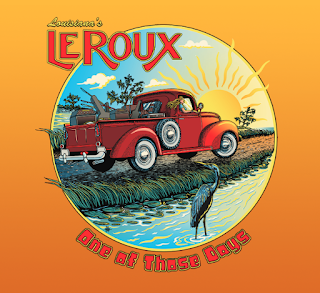 The album opens with its title track, “One Of Those Days.” The exact moment this song had me was on the line “I put on a pair of jeans and Deadhead T,” a line that occurs early in the track. I can’t help but appreciate Grateful Dead references, for they immediately connect me to a larger community, and these days we are certainly in need of that, right? And, like a Dead song, this one has a good jam section, one you can dance to, and with a little nod to CCR on guitar. I seriously dig the percussion on this track. Also, the song’s main line, “It’s just one of those days,” is a line many of us probably find ourselves uttering to ourselves somewhat regularly. “One Of Those Days” was written by Jim Odom and Tony Haselden. It’s followed by a cover of Dustin Ransom’s “No One’s Gonna Love Me (Like The Way You Do),” a song from his Thread On Fire. This tune has a good groove, and the right amount of soul. It’s something of a sweet love song with lines like “That’s why I need you for the rest of my life” and “There ain’t nobody gonna lift me up the way you do.” There are some great backing vocals giving the track something of a pleasant 1970s vibe, and also some wonderful stuff on keys. Then from the moment those drums start, there is no doubt that “Lucy Anna” is one of those great Louisiana songs designed to get us off our asses and dancing around. This is a song that effectively shouts New Orleans to us, and features some lively backing vocals and more delicious work on keys. But it is that groove that really grabs me. This is a ridiculously fun track, written by Richard Ferreira. Leon Medica plays bass on this one.

The opening lines of “Don’t Rescue Me” stood out the first time I listened to this disc: “All my friends don’t know what to do/They say I’m disappearing into you.” And then the title line is directed at his friends, “Don’t rescue me.” Oh yes, sometimes we just want to risk getting hurt, maybe even be devoured by a woman. If we are going to suffer, well, that is some suffering we can all deal with. This one has a heavier, bluesy sound, and was written by Jim Odom. Then “After All” is a slower, soulful number about the end of a relationship. “It ain’t the ending I was thinking of/I’ll be just fine without you, baby/Because after all, we never called it love.” Is that regret I hear in his voice? You get the feeling he wishes he could go back and tell her he loves her, and tell her over and over. This song was written by Randy Sharp.

On the 1983 LP So Fired Up, Louisiana’s LeRoux included a song called “Lifeline,” written by Rod Roddy and Leon Medica. Now the band is revisiting that song with a new version titled “Lifeline (Redux).” It certainly has a different sound than the original. Gone is that introduction, and gone is that 1980s rock sound. This version is a couple of minutes longer than the original, and becomes a decent jam toward the end. Then “Sauce Piquante” fades in, a cool, groovy, funky jam already in progress, so that it feels like we are entering a house where the party is already in full swing, with folks dancing and drinking, and the music having already reached that great place where all the musicians are in that groove. This instrumental track is whole lot of fun, and is another of my favorites. And when it ends, it fades out, so we get the sense the party is continuing. The album then concludes with a slower number, “New Orleans Ladies,” written by Hoyt Garrick. On this track, special guest Tab Benoit joins the band on guitar. Interestingly, Tab Benoit included a version of this song on his 2008 live album Night Train To Nashville, where he was backed by Louisiana’s LeRoux. So there you go. Leon Medica is on bass, and Tim Courville plays drums on this track.