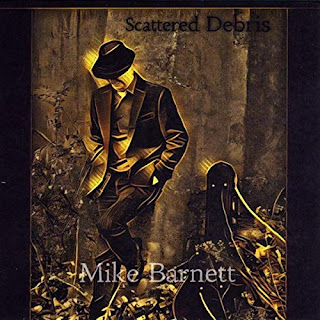 I was turned onto Mike Barnett’s music several years ago when he released Everybody Gets To Dream. One thing I loved about that album was its innocent and positive vibe, coming as a temporary relief from the troubles of the world. Well, we could all certainly use that kind of thing right now. And Mike Barnett has given us another batch of original material to help us through. Titled Scattered Debris, this new album contains music in that folk-pop realm, with some 1960s pop elements, a lot of it designed to raise our spirits, or at least ease our minds. Among those joining Mike Barnett on this release are Salim Nourallah on bass and guitar, and Dennis Gurley on guitar, both of whom co-produced the album with Barnett. Also performing on this disc are Joe Reyes on slide guitar, Erik Lewis on dobro, Kelly Matthews on drums and bass, John Dufilho on drums, Denise Risner on keys, Phil Solem (of The Rembrandts) on guitar, Jeff Grady on guitar, and Chris Holt on guitar.

There are positive vibes and sounds right from the beginning of the album’s opening track, “Nothing To Lose,” a song in that pop rock realm, with a bit of a 1960s feel. Check out these lines:  “I’ve got a right to brag a little/I won your heart, no easy task/We move along, no hesitation/We move along, nothing to lose/No way that we’re falling apart/No way we’re the losers/Let’s go back to the start/Let’s do it again.” In a time when it feels that everything is falling apart, it’s good to hear these words. We need to maintain a positive outlook, don’t we? That’s followed by “I Hope,” which is one of the album’s catchiest songs, reminding me of The Traveling Wilburys. “I hope to do/Something for you/Something that makes it better/I hope to do.” Ah yes, we need to take care of our personal relationships in these times of stress and anxiety. This is one of my personal favorites.

With a title like “Love Will Win,” you know you’re in for an uplifting and hopeful song, and Mike Barnett definitely delivers on that score. Again, there is a certain 1960s influence, particularly a George Harrison influence on this track. “It’s dark before morning/The sun will shine through/It doesn’t matter what you say or do/Hold on tight/It’s all right/And love will win.” I try to remain optimistic, which isn’t always easy these days. This music is helping. That’s followed by “The First Ten Days,” which has more of a bluesy and somber tone. “The first ten days in icy weather/The first ten days seemed such a breeze/Soon that changed, but not for better/All gone wrong, gone wrong for me.” Then “I’m Gonna Be OK” bursts in with a joyful sound to lift us up again. “Taking you to the train/Standing out in the rain/It’s driving me insane/But I’m gonna be okay/Chasing my blues away.”

“She’s A Mystery” has more of a folk sound, with harmonica and dobro, and some sweet pop elements as well. It also features probably my favorite vocal performance of the album. Plus, this one contains a nice baseball reference: “She’s a mystery to me/Like that pitch you did not see/High inside, but called strike three/She’s a mystery to me.” I love that! “I never once believed in fate/Or that love could turned to hate/Or your eyes could say ‘too late’/Never once believed in fate.” That’s followed by “Love Is Doing Alright,” in which Mike Barnett sings “You and I are only two/We can’t tell the world what to do.” Oh, but we fervently wish we could! This song has a sweet, gentle and pretty folk sound, and includes some nice whistling.

“Upstairs” is another of the album’s highlights. It has a moving and emotionally engaging sound, as well as a really good vocal performance. This is certainly one of the album’s more serious tracks. “One more hour ‘til it’s time/Take me back to face the crime/Stand me up right there in line/‘Cause it’s too late to change my mind.” The album then concludes with “Checked Out And Gone,” one of the album’s strongest tracks, this one delivered with more attitude and bite, which works well. “Love was never that strong/I don’t really care/I’m not really here/Checked out and gone/Irreplaceable/What a crock of bull/I’ve been gone so long.”

CD Track List
Scattered Debris was released on January 20, 2020.
Posted by Michael Doherty at 10:38 AM