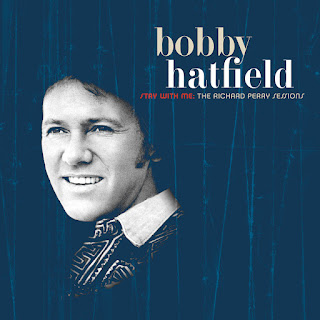 Bobby Hatfield was one half of The Righteous Brothers, a group known for its excellent vocals. He also released some solo material – several singles and an LP. In the early 1970s, he was working on another LP, which for one reason or another was never finished, and most of the tracks that were recorded for it somehow remained unreleased until now. Stay With Me: The Richard Perry Sessions collects several of those tracks (apparently, at least a couple of songs were lost), along with two singles from the sessions produced by Richard Perry and featuring an excellent band backing him. That band includes Klaus Voorman on bass, Ringo Starr on drums, Al Kooper on guitar and piano, Chris Stainton on organ, Bobby Keys on saxophone, and Jim Price on trumpet. Most of the songs here are covers, but there is one original composition by Bobby Hatfield.

This disc opens with its title track, “Stay With Me,” a song written by Jerry Ragovoy and George David Weiss, and originally recorded by Lorraine Ellison. Bobby Hatfield delivers a beautiful and soulful vocal performance. It is a truly moving track, his voice allowed to be the driving force of the song. This is the first take. The single version is also included on this disc. It was released in late 1972 on the Warner Bros. label, and is also excellent. I think I prefer the previously unreleased version, if only because it’s a bit longer, and I love that vocal work at the end. “Oo Wee Baby, I Love You” has more of a rock vibe, with a solid beat that at the beginning sounds like The Beatles’ “Get Back.” Hey, it’s Ringo on drums, so I guess that’s okay. It’s kind of a cool rendition. The song was written by Richard Parker, and was a hit for Fred Hughes (Hughes’ version did not have that “Get Back” thing). This disc includes two other versions of this song. This first version is Take 2. The second version is Take 3. Both have sudden endings, as if either they weren’t yet sure how to end it or they were planning on it fading out before then. The final version included here is the single version. The beginning is quite a bit different, with backing vocals singing “Come back, baby I love you/Come back, baby I need you,” but that “Get Back” thing is still there. The single was released in 1972. And, yes, it does fade out.

“Run To My Lovin’ Arms” sounds exactly like a song that The Righteous Brothers could have done, or should have done. It is a strong and passionate love song, written by Tony Powers and George Fischoff. Interestingly, Bill Medley also recorded this one, including it on his 1968 LP, 100%, which was his first solo album. So there you go: The Righteous Brothers recorded it. That’s followed by an interesting rendition of George Harrison’s “What Is Life.” It might sound a bit thin at first, in comparison to the original version, but I really like what Bobby Hatfield does with it, particularly his vocal delivery. A second version of “What Is Life” is included, this one feeling a bit slower.  Bobby Hatfield then turns to a standard, giving us a good and passionate take on Cole Porter’s “In The Still Of The Night.” I love the work on horns. We then get a second George Harrison tune, “Sour Milk Sea,” which features another really good vocal performance, and some nice work on keys.

“Baby Don’t You Do It” is a fun track, delivered at a good pace. I dig that section with just vocals and drums. This is a song that was written by Brian Holland, Lamont Dozier, and Edward Holland Jr., and was originally recorded by Marvin Gaye. This track is a combination of two takes, Takes 4 and 11. There is a sudden ending as the band just sort of halts the song. A second version of the song is included, which has a bit of banter at the beginning. I like hearing this stuff, those thoughts as a band finds its way through a number. I dig this song’s rhythm, and I also like the vocal performance, but it doesn’t feel like the two really quite work together, you know? But I love the energy here. It’s basically a cool little jam. The album concludes with its only original composition, “Rock ‘N’ Roll Woman,” which was released as the flip side to the “Oo Wee Baby, I Love You” single and interestingly also as the flip side to “Stay With Me.” This is a kind of funky, groovy number, a fun tune, with quite a different vocal approach. “Well, I tried my best to make myself a success/And provide happiness for you/And you stood by my side, kept me satisfied/And said, go ahead and sing the blues.”

CD Track List
Stay With Me: The Richard Perry Sessions is scheduled to be released on February 14, 2020 through Omnivore Recordings.
Posted by Michael Doherty at 2:49 PM