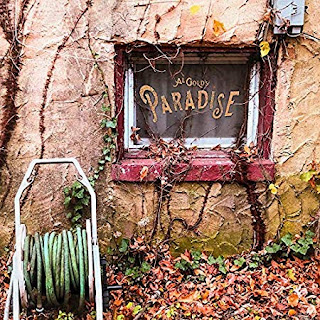 Al Gold’s Paradise is my paradise too, a place where we can groove to some excellent music in the blues and roots realm, a place where talented musicians gather to create something special for those of us in need of a community with soul, those of us in need of a break from the political horror show that’s been dominating our thoughts and discourse. And the musicians playing on Al Gold’s new album are indeed talented, and include folks like Tom Rice on electric guitar, Dave Stryker on guitar, Mitch Eisenberg on guitar, Anthony Tramburro on acoustic guitar, V.D. King on bass and guitar, Terry Hemmer on bass, Jared Gold on organ, Eric Heilner on piano and organ, Johnny Sansone on harmonica, Baron Raymonde on saxophone, and Jerry Cordasco on drums. The album features all original material written or co-written by Al Gold.

The disc gets off to a great start with “That’s My Baby,” a song that is ridiculously cool, sounding like some delicious old bluesy record from decades ago, some gem you somehow missed because its label had a small printing or something. But now here it is, and it is a groovy force to move us. The song has a steady rhythm, some delicious work on keys, and a raw and real vocal performance. I love that sax toward the end. The band jams, and that horn takes the lead, leading us in some dance through the darkness. That’s followed by the album’s title track. Well, one of them, for there are two tracks on this disc titled “Paradise.” This one, “Paradise (Down Home),” kind of eases in and then develops a sort of back porch vibe. Close your eyes, and let this music wash your blues away. Al Gold’s voice has such a rich tone, a voice that is friendly and experienced and wise and true. “Summer breeze blows, and makes you feel so nice.” Oh yes. This one too becomes a good jam, featuring some wonderful work by Al Gold on guitar. There is also some nice stuff by Johnny Sansone on harmonica throughout the track.  I love this music.

There is something exciting, perhaps even dangerous going on in “Tramps Take Linden.” You get the sense of it as the song begins. And Al Gold’s voice is so low, it sneaks up on you, rising up from the darkness, sounding like it might be the bass at first, a very cool effect. “The people of Linden got no sleep last night.” Then “Mr. Banker” comes at you like a train, rumbling along the tracks, and you just want to jump on at the next stop. But, baby, this train makes no stops, you just have to hop on, take your chances. Don’t worry, everyone makes it. This is a song of financial woes, but it sounds so good. When he sings “Now you want to take my home, make me leave this town,” you get the sense that there are probably better places on the horizon for him. This song was written in reaction to the banking crisis from a decade ago (Al Gold was kind enough to include some brief thoughts on each of the songs in the liner notes). Then “Ramblin’ Pony Blues” has a delicious heavy blues rock sound, like early Fleetwood Mac (which to my ears is still their best stuff). “That’s it, as far as I’m concerned,” he says with some satisfaction as the track comes to a close. “That’s it.” Indeed, it is.

I dig that harmonica at the beginning of “Boogie In The Dark,” which starts off as a cool little jam, loose and raw. I also love the backing vocals echoing the title line, just wonderful. That is Cassidy Rain (of The Outcrops), and after a bit, she then begins to be a more prominent force in this song, as it becomes more of a duet. That’s followed by “Got A Mind,” and from the moment this track begins, I am feeling that the world is a great place. That stuff by Eric Heilner on piano is wonderful. The song kicks in to become a rockin’ celebration, with some excellent work on saxophone, helping to give this a classic sound. This one ought to get you dancing. Toss your troubles aside, kick off your shoes, and twirl your partner round the room. “I’ve got a mind to travel/Got a mind to travel on.” Then some bluesy guitar work starts “Won’t Sleep Tonight,” like some lonely prayer from deep in the night. And when the song kicks in, Al sings, “You don’t know how I feel/Words came out all wrong.” Oh yes, this is blues through and through, and features some good work on organ as well as guitar. We then get the second of the two “Paradise” tracks, this one “Paradise (Uptown),” a sort of joyous swinging blues number that features Dave Stryker on guitar. This one also has some nice stuff on organ. The album concludes with another dance number, an instrumental track titled “Maplehood Limbo,” which features some wonderful work on percussion, including a short solo.

CD Track List
Al Gold’s Paradise is scheduled to be released on March 6, 2020.
Posted by Michael Doherty at 4:01 PM