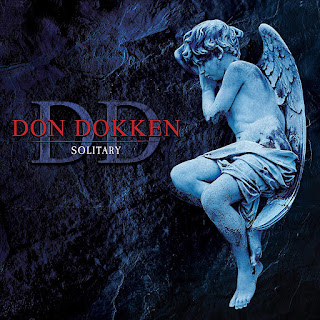 I was turned onto the hard rock band Dokken in the 1980s when they recorded a song for the third Nightmare On Elm Street movie. If my memory serves, I had an EP of that music on cassette, and listened to it quite a bit. Now I have to admit I have not been keeping up with whatever changes this band must have gone through over the years, and maybe if I had, the new solo album from Don Dokken wouldn’t have come as such a surprise to me. But Solitary is not at all what I was expecting from the lead singer of that rock band. This is a beautiful and passionate album, featuring music that has something of a haunting folk vibe at times. Most of the tracks are originals, written by Don Dokken. But the covers are probably what surprised me the most. But we’ll get to that in a bit. Joining Don Dokken on this release are Michael Thompson on guitar and bass, Steve Ornest on guitar, Wyn Davis on guitar and bass, Tony Franklin on bass, John Schreiner on piano and synth, John Keane on piano and synth, Frank Lentz on drums, Gary Ferguson on drums, and Vinnie Colaiuta on drums. Interestingly, this album was released earlier as a limited edition disc, with slightly different cover artwork, and three fewer tracks (the three covers). Now it is getting a proper release, as it so rightly deserves.

The album opens with “In The Meadow,” a song whose beauty is striking right from the beginning, with that nice guitar work. Don Dokken’s vocal performance is touching and moving. “By my side, you are with me/In my mind, we walk in the morning.” This song is like a folk tale, or like an Irish ballad. That’s followed by “I’ll Never Forget,’ which begins with an eerie, ethereal sound. “Never let you go/Always let you know/You’re the shadows round my soul.” Then “Where The Grass Is Green” has a bit more of a rock sound when it kicks in. Kelly Keeling provides backing vocals on this track. “Where did all the people go/That I used to know?” There is a passion behind Don Dokken’s vocal delivery, and it is that passion that we are drawn to here. Then in “Jealous,” he gives us a gorgeous vocal performance. Seriously. Here he is backed by keys. This is the first of the album’s covers, written by Josh Kear, Natalie Hemby and Timothy McKenzie, and originally recorded by Labrinth. Don Dokken delivers a moving rendition, certainly in line with the spirit of the original. “‘Cause I wish you the best of all this world could give/And I told you when you left me, there’s nothing to forgive/But I always thought you’d come back/Tell me all you found was heartbreak and misery.” This track was not included on the initial 2008 release of Solitary.

“Ship Of Fools” features some nice percussion. “Please don’t take my world/In the blink of an eye.” That’s followed by “You Are Everything,” which has a pretty and uplifting vibe right from the start, and develops a kind of sweet pop sound. “Try to understand who I am/I wish that someone would show me how/Try to escape, not accept my fate/Stop the crying/It doesn’t matter to me/What they say or believe/You are everything to me.” Then “Venice” has a bright, inspiriting sound, especially the guitar work as the track opens. This song makes Venice Beach sound like a sweet, enjoyable place to be; Don’s gentle, friendly vocal delivery certainly aids in that. I also really like the guitar work on this track. That’s followed by “Sarah,” which has an intriguing opening, a mysterious vibe and mood. “You are forever/Never be forgotten/Your wind surrounds me/Never be forsaken/The sky beneath me/I am forever.” That haunting sound pulls me in, and this song builds in intensity. “Everyone has a Sarah.” What could he mean by that, I wonder. After a couple of minutes, it takes on the sound of a hard rock song, if only momentarily.

Earlier when I mentioned the surprising choices of cover material, mainly what I was referring to was “My Heart Will Go On.” Yes, Dokken covers Celine Dion. What are we to make of this? And what’s crazy is that it is a beautiful rendition of the song from Titanic. Now, to be clear, Celine Dion didn’t write the song. It was composed by James Horner and Will Jennings, and Don Dokken was friends with James Horner, so the track is a tribute to him (James Horner died in 2015). And yes, I actually prefer this version, thinking it better than the original; it is grounded, yet magical. I am surprised by how much I like this track. That’s followed by “The Tragedy,” a strange sort of lullaby. “Go to sleep so you can fly/To that place where the children don’t cry.” This might be my favorite track, in large part because of Don Dokken’s heartfelt and passionate vocal delivery. But also the music here seems capable of transporting us to some other land, which fits so well with the lyrics. It’s a beautiful song.

A line from Steve Owen’s “Longing To Be” that has always stayed with me is “It’s a different kind of cursing, but ‘someday’ is the dirtiest word.” But “someday” is a word that also weirdly holds a lot of appeal. The original release of this album concluded with “Someday,” a song with an undeniably uplifting and comforting quality. Here is a taste of the lyrics: “Someday you will see/Deep inside of me/What could have been/How much heart I have.” Then this expanded edition concludes with a cover of “All That Love Can Be,” another song composed by James Horner and Will Jennings. This one was featured in the film A Beautiful Mind. On the soundtrack it is listed as “All Love Can Be” (rather than “All That Love Can Be”), and it is sung by Charlotte Church. As much as I am digging this Don Dokken album, he can’t complete with Charlotte Church’s vocals. Still, this is a nice take on the song. “I would watch in the night/Hold you in my arms/Give you dreams where no one would be/I would watch through the dark/‘Til the morning comes.”

CD Track List
Solitary was released on January 31, 2020 through Deadline Music, a division of Cleopatra Records. There was also a vinyl release – on bright red vinyl – but that version is missing the two James Horner compositions.
Posted by Michael Doherty at 3:03 PM