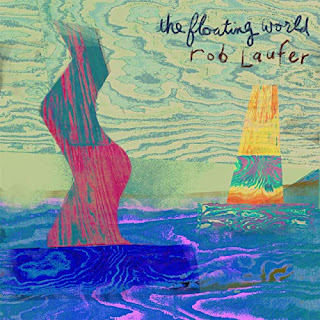 There is a whole lot of fantastic music coming out of Los Angeles these days, which of course is thrilling for me, since I reside in this city. One of the groups I have yet to see, but keep hearing about, is the Wild Honey Orchestra, a collection of well-known L.A. musicians who put on benefit concerts (they did one earlier this year featuring the music from The Kinks’ Are The Village Green Preservation Society). The man behind these concerts is Rob Laufer, a singer and songwriter who has produced albums for other artists as well as released a few albums of his own. The last one, Excruciating Bliss, came out nine years ago, and he’s finally followed that up with The Floating World. While he is joined on certain tracks by some special guests, this is basically a solo album, with Rob Laufer playing most of the instruments. He also wrote all the tracks.

The disc kicks off with “Avalanche,” a cool pop tune with folk elements. Check out these lyrics: “We could disappear without a sound/They found her belongings/Strung between the lake and a swallow’s nest/She writes from the new world/Buried is how I remember best.” Dave Pearlman plays pedal steel on this track, as well as the one that follows it, “Highway Machine,” which is one of my favorites. I love this music; it has everything I want: excellent lyrics and a sound that is its own, somewhere in the middle of rock, pop and folk, a full sound that carves its own reality and invites us inside. Plus, there is a string section, which I always appreciate. I am a sucker for cello. Matt Fish is on cello, and Lyn Bertles is on violin. Here is a taste of the lyrics: “Would you opt for lore and illusion/To the exclusion of the spark/Sure, it’s sad pulling reasons by the roots/And sure, it’s sad packing monkeys into suits/But naming’s just a form of persuasion.” Rob Laufer then changes gears for “Bolt Of Blue,” a fun, upbeat number. This one is dominated by some great sounds on keys. Eric Drew Feldman is on organ and horns; Danny McGough is on Wurlitzer. “Holy robes and clever sayings/Never held much sway for you/So why is your TV on that channel/The first thing that you tune it to.”

“Floating World,” the album’s title track, has a pretty sound (with just a touch of a John Lennon vibe, right?). And again, this album features some excellent lyrics, such as these lines: “And the floating world was her own/No sailor could hold onto her/Harpoons, torpedoes, valentines/All seemed to pass right through her.” That’s followed by “Space And Time,” another of the disc’s highlights. Its nice, strong, prominent beat brings a smile to my face, this track reminding me a bit of T. Rex, mostly in the vocal approach. Yeah, there is definitely a late 1960s feel to this, with a bit of a trippy vibe at moments. Lyn Bertles and Matt Fish return on violin and cello respectively. I seriously love this track. “Don’t be afraid to come alive/Nothing will leave you satisfied.”

As I mentioned, this album boasts some tremendous lyrics. From “Fence,” I really like the line “She’d dress herself in clouds.” That was one that stood out for me the first time I listened to this album. That line, almost on its own, creates a vivid character. Then Carl Sealove joins Rob Laufer on bass for “This River.” As “The Holding Sea,” opens, the vibe is similar to some of Aimee Mann’s music, which of course I love. “As Long As You Belong” has something of a 1970s sound, and features Nick Vincent on conga drum. “Why’s it gotta be so hard/When they say all you gotta do is whistle.” The album then concludes with “Hippie Love.” I wasn’t sure what to expect from this one, based solely on its title. When I had hair (oh, those long gone days) I was sometimes called a hippie (though I was much too young to actually be a part of that movement), so I tend to bristle at the use of the word, which often seems to be used with disdain. There has always been something derogatory about the word. And in this song, is Rob Laufer’s attitude toward the couple condescending or affectionate? Seems to be a bit of both. You’ll have to decide for yourself when you listen to it. The song has a cheerful vibe, in part because of its beat. Nick Vincent plays conga on this one too. “Come away, come away with me/Paradise is just around the bend/We’ll hide from the man/We won’t have a plan.”

CD Track List
The Floating World was released on August 23, 2019. By the way, for those living in Los Angeles, Rob Laufer is playing at the next Mimosa Music Series concert on September 29th.
Posted by Michael Doherty at 2:24 PM