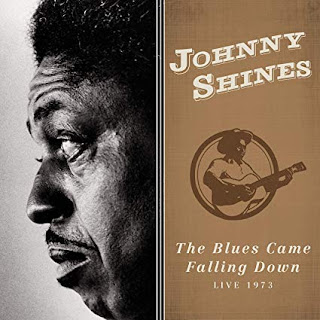 Everybody I know has the blues these days. If you are paying attention at all, it is difficult to avoid them. Fortunately, the blues can sound so good, as they do on this live album from Johnny Shines. Johnny Shines was the real deal. Born in 1915, he began playing in the early 1930s, a great time for the blues, and he toured with Robert Johnson for a while during that decade. The Blues Came Falling Down: Live 1973 is, as its title promises, a live recording of a concert Johnny Shines performed in 1973 at Washington University in St. Louis. This was a fairly active time in his career. In addition to touring, he put out several albums in the early 1970s. This CD is mostly a solo performance, with Leroy Jodie Pierson joining him on guitar on a few tracks. Most of the songs on this disc were written by Johnny Shines, but there are also a few Robert Johnson tunes.

The album opens with “Big Boy Boogie,” a wonderful acoustic blues tune. The way Johnny Shines speaks in introducing the song, he sounds like a folk performer, reminding me just a bit of Arlo Guthrie in the way he says “about this time.” Is it just me? This is an instrumental tune, but with Johnny offering some comments on the music at different points, giving us a bit of biographical information, and even a bit of a music lesson. There is some joyful playing, which I appreciate. And from the audience’s applause at the end, it’s clear they appreciated it too. He seems so modest, softly saying “I hope you like it” as he begins “Seems Like A Million Years.” It begins with some good work on guitar, and then his voice suddenly comes in, a voice with a tremendous power and a whole lot of passion, sort of in contrast to what we’ve heard of his speaking voice. “Seems like a million years since I sat down and wrote to you/Now and then I wonder why I love you the way I do.” And, holy moly, listen to the power behind that voice as he begins “Have You Ever Loved A Woman,” delivering that first line a cappella, and stretching it out, like an announcement that the blues are here, and are here to stay. This track is fantastic, mainly because of his vocal performance.

Johnny Shines introduces “Stay High All Day Long” as an old song, and I love the humor of his introduction. “Oh, I guess it was wrote way back when, you know.” He has such a good rapport with the crowd. This track finds him doing some interesting stuff with his voice as well as with his guitar, and is a totally engaging song. I love the way he holds onto the word “down” in the line “Well, society bring me down.” And, hey, sometimes staying high all day long seems the right way to go, the right way to handle the current political horror show. Toward the end, this song mentions Chubby Checker and James Brown: “I don’t do the Chubby Checker, James Brown or no one else/Well, the good lord made us all, and I just be myself.”

With “Happy Home,” I like that he takes a moment to feel his way into the song on guitar, then finds that cool rhythm. It’s interesting that this song is paired with “Someday Baby Blues,” because in this one he also sings the words “Someday baby” several times. “Someday Baby Blues” is a cool, slower blues gem. “Well, someday baby I won’t have to worry over you.” That’s followed by “They’re Red Hot (Hot Tamales),” which is so much fun. He tells the audience they should know this song, that it just came out “the day before yesterday.” It moves at a quick clip, and is a joy to listen to. It’s a short number, and it ends rather abruptly. In his introduction to “You’re The One I Love,” Johnny Shines tells the audience: “I don’t care who you are, where you come from, you’re going to have the blues. Sooner or later, you’re going to have the blues. You know, if you didn’t have them yesterday, you’ll have ‘em tomorrow.” That gets the audience laughing. Half the track is the introduction, and yet the introduction flows so well into the song that it feels that these things are not separate, He gives a kind of sweet, gentle vocal performance here, then belts out lyrics at certain moments, as when he sings “God knows I love you.”

“Sweet Home Chicago” is a song that never fails to delight me, and clearly the audience feels the same way, for the moment this tune begins, the folks there start clapping along. This is a good rendition, and it features Leroy Jodie Pierson on guitar. Pierson also joins him on guitar on “The Blues Came Falling Down,” the disc’s title track. “Let me hear you, Leroy,” Johnny Shines says a little more than halfway through, and we are treated to a delicious guitar section. Then “Big Star Falling” begins with the two guitarists giving us a cool little jam. This is another fun number. That’s the last track to feature Leroy Jodie Pierson, but Johnny Shines then borrows Leroy’s guitar for “Tell Me Mama.” There is a bit of tuning and joking at the beginning of this one, with Johnny saying “And when I tell a joke, everybody laughs whether they want to or not.”  This track is another of the disc’s highlights. “Now won’t you tell me mama, what in the world is wrong with you/It just don’t seem like I can please you, woman, no matter what in the world I do.” That’s followed by “Ramblin’,” which seems to be a variation of “Walkin’ Blues.” Before “It’s Nobody’s Fault But Mine,” he thanks the audience. He introduces that song as one of his mother’s favorite songs, and delivers a very cool rendition. I particularly like his choices on guitar for this one.