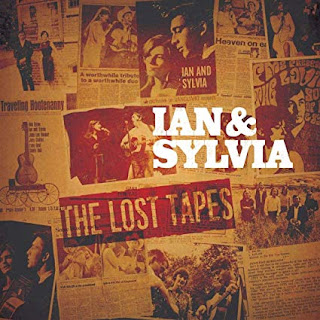 I first became aware of Ian & Sylvia when I was in my teens and getting into folk music. There was plenty of great folk music in Massachusetts in the late 1980s, both in the coffee houses and on the radio. And while I was excited about the current local artists, I was also drawn to the 1960s folk artists, and it wasn’t long before I was introduced to Ian & Sylvia through “You Were On My Mind,” “Four Strong Winds” and their version of Gordon Lightfoot’s “Early Morning Rain.” The duo wrote their own material, but also covered other artists’ work as well as traditional folk songs, also venturing into country and even blues at times. The Lost Tapes is a two-disc set which contains recently found live recordings of some of their most beloved songs and interesting covers. I do wish this release contained more extensive liner notes, listing the dates and locations of the concerts from which these recordings were pulled, and listing the other musicians who perform on these tracks. What we are told is that the recordings are from the early 1970s, toward the end of their career as a duo and as a couple, and that they were discovered by Sylvia Tyson herself (she is also credited as executive producer of this release). Even though information is rather lacking, the music is really good.

The first disc opens with a sweet and delightful rendition of the traditional folk song “Keep On The Sunny Side,” with some country elements. This track should put a smile on your face. It is followed by a gentle version of “Darcy Farrow,” their vocals sounding gorgeous. This song was written by Steve Gillette and Tom Campbell, and was originally included on Ian & Sylvia’s Early Morning Rain LP. They then deliver a rousing country version of “Will The Circle Be Unbroken.” And check out those deep bass vocals on these lines: “Well, I followed close behind her/Tried to hold up and be brave/But I could not hide my sorrow/When they laid her in the grave.”

One of my favorite tracks on the first disc is “Four Rode By,” one of the few Ian Tyson-penned tunes to be included. It was originally included on their Northern Journey album, and is one of those folk songs that tell tales of outlaws. “They shot him with a rifle and they took his watch and chain/When the posse found them, they were in the lonely cabin/Hunger took their fight away and no one else was slain.” This rendition features some great guitar work and energy. “Four Strong Winds” is one of Ian & Sylvia’s most widely known and beautiful songs. It was written by Ian Tyson, and he gives us an excellent vocal performance on this recording, nuanced and moving.

There is a bit of stage banter before “Little Beggarman,” as Ian introduces the song, mentioning that he originally learned it from the Clancy Brothers and Tommy Makem. (The banter, though introducing the song, is actually included at the end of the previous track). This track is another of the disc’s highlights. It’s a whole lot of fun, and features some wonderful guitar work by Red Shea (Ian mentions him in the song’s introduction). The last of the original songs to be included on this disc is “Summer Wages,” a song from the duo’s So Much For Dreaming album. This is a strong and totally enjoyable song written by Ian Tyson. The first disc closes with a really nice rendition of “I’ll Fly Away,” with a bass line that I totally dig.

The second disc is titled “Previously Unreleased,” though it is my understanding that all the music on both discs was previously unreleased. From what I can gather, these are songs that weren’t recorded for any other Ian & Sylvia record, live or studio album. They are all covers, mostly country tunes. This disc opens with “After The Fire Is Gone,” a delicious country number written by L.E. White and originally recorded by Loretta Lynn and Conway Twitty. Ian & Sylvia do a great job with it, the first lines of their rendition delivered a cappella by Sylvia. That’s followed by another country song, “Heartaches By The Number,” the lyrics delivered with just the right amount of heartache in their voices. “Now I’ve got heartaches by the number/Troubles by the score/Every day you love me less/Each day I love you more.” Ah yes, that there is some trouble indeed. They continue with another popular country tune, “Sweet Dreams,” this one written by Don Gibson. As they begin it, they mention the Faron Young version. This is one of those gorgeously sad country tunes, and Ian & Sylvia give us a moving performance.

They then switch from country to blues with a good rendition of Robert Johnson’s “Come On In My Kitchen,” the first several lines delivered a cappella, sounding so good. The band then kicks in. I dig the way they approach this tune, giving it a bit of a honky tonk vibe while maintaining its blues base. It’s a lot of fun. They stick with the blues (well, country blues), following that with “Jimmie’s Texas Blues,” a song written by Jimmie Rodgers. I particularly like Ian’s vocals on this track, and his performance helps make this one of my favorites of the second disc. This track has such a good vibe. Sylvia then gives us a sweet and beautiful vocal performance on “How Long.” That’s followed by an uplifting country version of Tom Paxton’s “The Last Thing On My Mind,” a song I never tire of. “Are you going away with no word of farewell/Will there be not a trace left behind/I could’ve loved you better, didn’t mean to be unkind/You know that was the last thing on my mind.”

Sylvia is joined by Lucille Starr on vocals for a really good rendition of Buck Owens’ “Crying Time.” Their voices sound gorgeous together, with a lot of passion. There is some stage banter at the end of this track, though it’s the introduction to the next track, “Starting All Over Again.” This disc then finds them covering a second Buck Owens song, “Together Again,” with Ian singing lead on this sweet tune. Lucille Starr joins Sylvia again for a nice, energetic rendition of “Silver Threads And Golden Needles.” The disc concludes with an excellent rendition of the Utah Phillips song, “The Goodnight Loving Trail,” featuring a wonderful vocal performance by Ian. This is a song that Ian Tyson would later revisit, including it on his 1984 self-titled album.

The Lost Tapes is scheduled to be released on September 6, 2019 on Stony Plain Records.
Posted by Michael Doherty at 4:10 PM