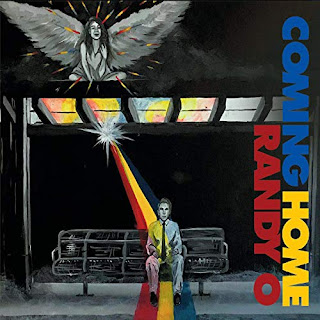 Randy O is the lead singer of hard rock band Odin, a group that gained fame from The Decline Of Western Civilization Part II: The Metal Years, which interestingly came out as the band was breaking up. That group has since reformed with all the original members and occasionally plays gigs at places like Whisky A Go Go, rocking just as hard as they did back in the 1980s. And somehow Randy O’s voice still has the same power and control as in the early days, which is remarkable. Now Randy O has released a solo album. Titled Coming Home, it is something of a departure from his work with Odin. The music has a bit more of a pop flavor to it, more of a straight rock sound that may have a broader appeal, and still led by that great vocal talent. Joining Randy O on this release are Rodger Carter (who has played with Glen Campbell, Berlin, Lita Ford and many others) on drums (Carter also co-produced the album), Toshi Yanagi  (from Jimmy Kimmel Live) on guitar, Matt Bissonette (who plays with Elton John) on bass and backing vocals, Lance Morrison (who plays with Don Henley) on bass, Rick Sailon on violin, Will Hollis (who plays with The Eagles) on keys, Patrick Regan on horns, Chariga Bissonette on backing vocals, and Kudisan Kai (who has sung with Elton John and Chaka Kahn) on backing vocals.

The album kicks off with “I’m Feeling Good,” a song that is so aptly titled, for this is one of those delicious rock songs that feel like summer. It’s the kind of music I grew up with, the kind of song that puts me back in touch with those days, so that we never grow old. This track even has a bit of whistling (that’s Randy’s son Patrick providing the whistling). It is one of my favorite songs on the album. “No, I’m not looking back/I’m just going to keep on dancing.” Amen. That’s followed by “Black & White Don’t Matter.” A couple of years ago when I began hearing the tracks that would make up this album, “Black & White Don’t Matter” was a stand-out for me, both lyrically and musically. Lyrically, this one has something to say, but the song has also got a catchy hook. It opens with some “do-do do-do-do” vocals. “Can’t you see what they’re doing to you and me/Don’t you know that they’re stealing away our dreams.” I also dig the electric guitar work on this track.

“It’s The Same Old Day” is another delicious rock tune that feels like summer and youth, especially the chorus, with those excellent backing vocals, which make me smile every time I listen to this song. This is a really good solid rock song, with more great stuff on electric guitar. Then when “Holding On” kicks in, it has an early 1980s thing, with some surprising pop elements such as the echoing of “my eyes” and “I cried” halfway through. “Hold on for one more day/Hold onto these dreams of mine.” It is interesting to me that the idea of holding onto one’s dreams is a recurring element on this album, because the album itself was apparently a dream that Randy O had for quite some time. “Pop’s Song” is a reworking of an earlier song, “Lonely Man,” from the Lostboys’ 1990 album Lost And Found. A line from this song provides the album with its title, and interestingly this line was not in “Lonely Man.”  This is a slower song, with some pretty moments. It is followed by “I’m Changing.” By the way, on the CD case, “I’m Changing” is listed before “Pop’s Song,” which is the intended order. But apparently the first hundred copies of the disc have the incorrect order. It is likely that if you purchase the album now, the order will be correct on your copy. At the CD release party, Randy O opened his short set with this song, which felt appropriate. After all, this album is quite a change from the music of Odin, which is what most of us know of Randy’s sound. “Is there any time for changes/Is there any place left to hide/I can’t believe that we fell apart/Is there any time left for changes.” Interestingly, this song also includes the album’s title in its lyrics: “It doesn’t seem that long ago /Tell me please you’re coming home.”

“Joy Joy Joy” is mellower, pretty song featuring violin, another of this album’s surprises. “All she ever wanted was a little love/All she ever wanted was one little hug.” That’s followed by “LTWA.” A really good groove gets this one going, and will likely get you moving. I absolutely love that work on bass. And then there are horns. This song has such a wonderful and positive vibe. “It’s a new day/Yeah, the hell with the old ways/I’m tired of falling down.” And this song has a totally catchy chorus: “I’ve been dreaming for a long time/Such a long, long time/I’m just learning to walk again.” So “LTWA” stands for “Learning To Walk Again,” and not, say, The Library Of Tibetan Works And Archives. This one ends up being another of my favorites. The album then concludes with “Hanah’s Song,” which also has a good groove. Hanah is Randy’s daughter, and so “You loved that eighties metal/That your friends just thought it was noise” is an interesting line, because of course Randy was in a metal band in the 1980s. Hanah is still a big fan; at the Odin concerts I’ve attended, she has been front and center in the audience. By the way, she created the artwork for this album.