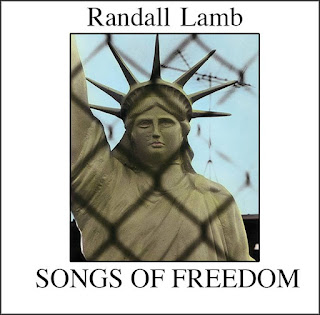 Fur Dixon & Steve Werner introduced me to a lot of excellent singers, songwriters and musicians. They used to throw these great back yard parties that would become jam sessions around a fire, with many of L.A.’s best folk and country players joining in. They also had some wonderful musicians join them at their shows. One songwriter that really stands out among that phenomenal group is Randall Lamb. Fur & Steve covered his “I Like The Way That I Feel” (also known as “I Like How I Feel”) in concert, and included it on their Songs Of The Open Road Volume One CD. Hearing that song was what first got me interested in the music of Randall Lamb. If you appreciate good songwriting and an honest delivery, you should definitely check this guy out. He has a new CD available titled Songs Of Freedom, which features all original material, showcasing his songwriting talent.

Randall Lamb opens the new album with “The Walking, Rambling Blues,” which features some nice touches on harmonica at the beginning. This is a good tune tackling one of those perennial folk topics – being on the road. “When I woke up this morning, I put on my shoes/I headed out the door, I had the rambling blues/I had the rambling blues, I had the rambling blues/I didn’t know what to do but keep on walking/Because I had the walking, rambling blues.” His vocals have a bit of that rough and weary quality that makes this song feel genuine, like he stopped long enough to record the song and then was out the door again. Also, he draws us in by directly addressing us with lines like “I’m sure you’ve had ’em too/They can get to you.” And whether we’ve had the walking, rambling blues or not, we certainly want to say we’ve had them, to join in. You know? Because singing them makes them sound not all that bad.

He follows that with “My First Guitar,” which he delivers with a straightforward spoken word style. He speaks of it with fondness and humor: “It was a sweet little thing/I couldn’t play or sing.” It isn’t just about that first guitar, but about how one thing leads to the next on whatever your chosen path is. And here we all are today. How is everyone doing? Check out these lines: “And somehow here I am today/Trying to use the things/I picked up along the way/Who knows these things/Good or bad from the past/Could be the child of your future/With a long shadow cast.” This song also has references to some other musicians, like Woody Guthrie and Hank Williams.

“Songs Of Freedom,” the album’s title track, is one of my favorites. The first time I put this CD on, certain lines stood out for me, such as these lines from this song: “There’s the freedom that money can buy/There’s the freedom that money denies.” Perhaps it’s partly due to my mood these days, but this song in particular speaks to me. “Freedom blowing on the wind/Round the world and back again/You build a wall, it still gets in.” Yes.

That’s followed by another of my favorites, “So Many Different Shades Of Blue.” There is something beautiful about this song – that sad kind of beauty that affects us on some strange level that maybe we’re only aware of when we listen to music like this. It opens with these lines: “Things I do/Used to do/And don’t do/Anymore/Who I am/Who I was/But I’m not/Who I was before.” But the following lines are what get me every time: “I think about it/Now and then/Like writing a letter/That you never send/You know it by heart/From end to end/Might send it one day/But you don’t know when.” Something about those lines nearly brings me to tears.

“Too Big To Fail” is a fun, quirky and oh-so-pertinent song about the order of things around here. Check out these lines: “We own God/We own the news/We own most of everything/So go ahead and choose/Money talks and we can’t lose.” How’s about that for getting right to heart of the matter? “We own the future/We own the past/We own the oil/We own the gas.” I love that this song manages to be both fun and depressing simultaneously. Randall Lamb concludes this CD with another topical song, “Right Wing Jesus.” It’s an excellent song, though after speaking with some folks on the right, I doubt any of them would understand it. They might think Randall was in complete agreement with them. “He protects the bankers, the corporate and the greedy/He’s had enough of the poor and needy/He’s anti-union and he’s anti-gay/He’s a card-carrying member of the NRA/Right wing Jesus, right wing Jesus/Right wing Jesus/Right on.”

CD Track List
Songs Of Freedom was released in January 2017.
Posted by Michael Doherty at 8:53 PM