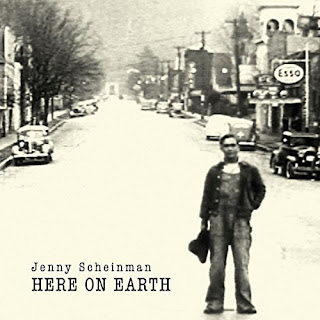 Jenny Scheinman’s new album, Here On Earth, is precisely what I needed today to get my mind off the political insanity of our nation, at least for a while. The tracks on this CD are excellent instrumental tunes led by Jenny Scheinman’s fiddle, the songs being of several different styles and emotional content. All of the tunes are originals, written by Jenny Scheinman, many of them composed for Kannapolis: A Moving Portrait, a collaboration with filmmaker Finn Taylor. Jenny Scheinman has played with a lot of talented artists, including Ani Difranco, Lucinda Williams and Bill Frisell, and Frisell is one of several accomplished musicians joining her on this CD. In addition to Bill Frisell on guitar, joining her on this release are Danny Barnes (from Bad Livers) on banjo, guitar and tuba; Robbie Fulks on guitar and banjo; and Robbie Gjersoe on resonator guitar. What a pleasure it is to listen to this music. These songs create, or evoke, a better, more honest and true America than the one being crafted by the creatures currently inhabiting the White House. And this music will be with us long after those monsters have been defeated.

Jenny Scheinman gets things off to a good start with a short tune titled “A Kid Named Lilly,” which features Robbie Fulks. It has a familiar feel, which immediately pulls me in and has me smiling. That’s followed by “Rowan,” which has a sweet, optimistic, warm vibe. Pull your loved one close and give him or her a kiss while this plays. Then lift each other up for a brief dance on the wooden floor boards during “Hive Of Bees,” which has a delightfully timeless feel.

Things turn darker, more serious, and a bit more introspective with “Pent Up Polly.” It feel like things might lead to a duel or knife fight on an otherwise deserted dirt road, as the combatants ready themselves, circle each other, size up the matter. Or perhaps they’ll just endlessly prepare, and no harm will come to anyone. Jenny Scheinman switches gears again with “Delinquent Bill,” a lighter, loose, relaxed, friendly and kind of catchy number. That guitar part has me tapping my toes and nodding my head in time. That’s followed by “Up On Shenanigan,” which has a traditional feel to it, and features some really good work on guitar. And the next track is the one with the title that makes me laugh each time I see it: “Bark, George!”

“Broken Pipeline” is one of the most interesting tracks, and is one that features Robbie Gjersoe on resonator guitar (“Deck Saw, Porch Saw” is the other). There is something of an anxious quality to this one, with its rhythm and repeated phrases, like something is about to happen and there’s no stopping it. This one builds up nicely, and I find myself completely engaged and immersed in it.  “Annabelle And The Bird” is another favorite of mine. It is pretty and has that wonderful timeless quality. Some of these tracks seem to have strong narratives without a single lyric, and this is one of them. At the end of this song, I feel I’ve been told an old, yet relevant tale. “Deck Saw, Porch Saw” is pure fun. Grab a partner and dance away your cares.

CD Track List
Here On Earth is scheduled to be released on April 28, 2017 through Royal Potato Family. (It was made available to download on March 3rd.)
Posted by Michael Doherty at 4:50 PM