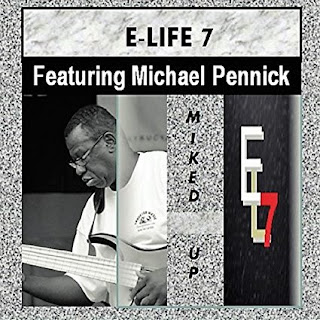 Every day presents more horrible news from Washington, D.C. It’s impossible to even keep track of everything that’s gone wrong. It’s too much, and it’s happened too quickly. It often feels like we’re going to be crushed by the weight of it, and most of us feel that constant tension in our gut. Maybe the trick is to just dance and glide through the apocalypse, hope for the best, and come out the other side smiling, if exhausted, ready to survey the damage. I don’t know if it’s the best course of action. But the debut CD from E-Life 7, Miked Up, ought to help in that endeavor should you choose that path. This disc provides some delicious funky tunes, mixing in jazz and modern R&B elements. These are mostly instrumentals, and mostly original material. The band is made up of Michael Pennick on bass, Rodney Spears on keys, Charlie Crymes Jr. on keys, Ronald Walker on guitar and Tim Webb on drums. Joining them on certain tracks are Ken Whitman on saxophone, Walter Kemp III on keys, Van Taylor on keys, Joey Diggs on vocals and Dee Osbourne on vocals. By the way, E-Life 7 means to enjoy life seven days a week (and is not some strange online electronic life, as I’d first surmised).

This disc kicks off with a funky bit of fun titled “Sunday Night.” Perfect for tonight. And I immediately dig that bass. Be prepared to dance, because this instrumental number definitely has some 1980s vibes worked into its structure. It was written by Ronald Walker. There is a brief bass solo halfway through. And then the second track, “Chaos,” also written by Ronald Walker, opens with some fantastic work on bass. This one has a much more interesting, unusual groove, which I love. It’s a very cool and driven jam, and is one of my personal favorites. I just wish it were longer. It’s over too soon. But no worries, as the next track, “Second Level,” also begins with the bass. There is a funky element to this one, though also with a pop dance feel. This one was written by Michael Pennick.

“Smooth Ride” is a slightly mellower number, but still with some damn good work on bass. This one features Ken Whitman on saxophone, and his horn works to raise us up. (Ken Whitman also joins the group on saxophone for “Sunrise.”) “Smooth Ride” is followed by “Inner Beauty,” which also features some mellower exploration, in the modern R&B realm, with just little touches of prog rock. But again, there is more delicious work on bass, and this track features Walter Kemp III on keys. Van Taylor joins the band for a good instrumental rendition of Stevie Wonder’s “That Girl,” the album’s only cover.

“Tony Rome” was written by Ron Walker and Michael Pennick, and features some excellent playing by Michael Pennick and some interesting changes. It gets kind of wild just as it’s ending. This CD also includes a second, somewhat shorter “radio edit” version of this one.  “Feelin You” features vocals by Dee Osbourne and Joey Diggs. “I’ve been watching you, baby/You’ve been turning me on/Don’t you know that I am feelin’ you.” Ah yes, somewhat romantic, somewhat creepy. Leaving this song on a stranger’s answering machine, for example, might not be received with the type of excitement you’d want to generate. “Feelin You” was written by Ron Walker and Michael Pennick. There is a second, shorter version of this song as well. “I want you in my life/I don’t want to be lonely tonight.”

“Before The Storm” is a cool, kind of mellow and passionate journey with a positive vibe, which I appreciate. This is another of my favorites, and has some really good work on keys as well as bass. “Before The Storm” was written by Tim Webb and Michael Pennick. That’s followed by another cool number, “Miked Up,” the CD’s title track, which was written by Ron Walker and Michael Pennick. It’s time to get funky, baby. Just focus on the beat and ignore the news for a bit, things might be okay. This track does have vocals by Joey Diggs and Dee Osbourne, but sort of in the background. “Let’s get miked up.” This one is a really good jam, and is for me another of the CD’s highlights.

CD Track List
Miked Up is scheduled to be released on March 24, 2017 through Three 2 Go Music.
Posted by Michael Doherty at 11:58 PM