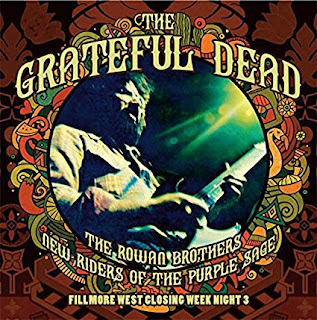 When Bill Graham closed the Fillmore West in 1971, he threw a series of farewell concerts. The lineup for the third night was The Rowan Brothers, New Riders Of The Purple Sage and the Grateful Dead. Fillmore West Closing Week Night 3, a five-disc box set, contains nearly the entire night’s music (it is missing one song from the Rowan Brothers’ set). The discs are a bit out of order, giving prominence to the Grateful Dead by putting their sets first (which makes sense). If you want to listen to the music in the order it was presented on the night of July 2, 1971, then play the discs in this order: 5, 4, 1, 2, 3. The show was broadcast on KSAN, and this box set is one of those unofficial radio broadcast releases. The sound is pretty good, and there are no interruptions from any radio station personnel.

The first disc contains the first hour or so of the Grateful Dead’s first set. Bill Graham’s introduction is included as a separate track. The band gets things going with “Bertha,” and the energy is high, even though something is a bit off, out of tune. Some tuning follows. Then, when they think they’ve got it right, they go into “Me And Bobby McGee.” More tuning follows that, as they still need to make adjustments. Then we get the first Pigpen performance of the night, “Next Time You See Me,” with his harmonica prominent in the mix. “You only got your sweet self to blame.” And guess what? More tuning follows that. This show is somewhat known for its tuning troubles. But it’s still an enjoyable show, and when they start “China Cat Sunflower,” the audience gets excited. Jerry’s guitar still sounds off to me, and this is a somewhat messy rendition, though the transition to “I Know You Rider” is fairly smooth. This version of “I Know You Rider” has its own problems, however, with some sloppiness and perhaps miscommunication at a few moments. There is more turning before the band launches into “Playing In The Band,” which was still a relatively new song at the time of this show. At the beginning, has Bob forgotten the lyrics, or does his microphone cut out? I’m not sure. This is a really short version of “Playing,” just about five minutes, and something still sounds off. It’s one of the weakest versions I’ve ever heard. The song hasn’t yet developed into the great jam vehicle it would soon become.

And then there is more tuning. Holy moly. And still more tuning after “Loser.” It sounds like someone is impatient with the tuning. “Come on, man, let’s hear it… What are you waiting for? Let’s hear it!” Pigpen then delivers “The Rub” (also known as “Ain’t It Crazy”), with more good work on harmonica. More tuning follows, and then they do “Me And My Uncle,” and it’s a pretty good rendition, with Bob really into it. They follow that with “Big Railroad Blues,” and things seem to be cooking now. Strange for this song to be a highlight of the disc, but it is, and it concludes the first disc.

The second disc contains the rest of the first set and the beginning of the second set. It kicks off with a seriously good and rockin’ version of “Hard To Handle,” with Pigpen delivering the goods vocally. Things are really moving now, and everything seems to be coming together perfectly. The band follows that with “Deal,” which feels like it has a slightly relaxed pace, but is still a good version. Bob then picks Chuck Berry’s “Promised Land” to follow that. They then end the first set with a nice long “Good Lovin’.” Oh yes. The thing about this first set, it has a whole lot of Pigpen. And this “Good Lovin’” has plenty of jamming, and plenty of Pigpen’s vocal improvisation. “Jump on your pony and ride, sweet mama!”

The second set gets off to a fun start with an energetic “Sugar Magnolia.” Jerry then brings things down a bit with a beautiful, heartfelt rendition of “Sing Me Back Home.” It’s an absolutely gorgeous and moving version, and it concludes the second disc.

The third disc opens with “Mama Tried,” so the band actually played two Merle Haggard songs in a row. Now on the CD case and on the back of the box it lists “Beat It On Down The Line” as the next song, but the Dead did not play that song at this show. What follows is actually “Cryptical Envelopment,” leading into a drum solo. The drum solo is presented as a separate track, so that is why there are still ten tracks on this disc, even though “Beat It On Down The Line” is not present. And that leads directly to a great, thumping, wild “The Other One,” a terrific jam with peaks and valleys and exploration into strange territory. This one will overtake you and possibly subdue you at moments, and then raise you up and fling you at passing meteors. That’s followed by another Pigpen song, “Big Boss Man,” and then a good “Casey Jones.” The second set then concludes with “Not Fade Away” into “Goin’ Down The Road Feeling Bad” back into “Not Fade Away.” The encore is an excellent, high-energy version of “Johnny B. Goode.” I’m glad this disc includes the audience noise before the band comes back out for the encore. Often that is cut.

New Riders Of The Purple Sage

I started listening to New Riders Of The Purple Sage in my late teens, specifically because of the Grateful Dead connection, with Jerry Garcia and Mickey Hart early members of the band. But I ended up loving their stuff, even their recordings without Jerry. It’s some fun, delicious country and country rock. Well, the fourth disc contains their complete performance from July 2, 1971. They played before the Dead that night, and Jerry sat in with them on pedal steel.

They play some of those favorites that I had on cassette in my teens, such as “I Don’t Know You,” the pretty “Last Lonely Eagle, “Louisiana Lady” and “Glendale Train,” the last being a song that often gets stuck in my head. I love the sweet-sounding “Superman.” “If you’ll share the road with me, I’ll walk along with you.” “Sailin’” is another highlight. At the end of tracks, often the applause will quickly fade out, so it seems likely that we’re missing some banter or tuning between songs. They conclude their set with a cover of the Rolling Stones’ “Honky Tonk Women.” The encore is a seriously good rendition of The Band’s “The Weight.”

The fifth disc contains the performance of the first band of the night, The Rowan Brothers. I’m not all that familiar with The Rowan Brothers, Chris and Lorin, though I was turned on to their older brother Peter Rowan through his work with Jerry Garcia in Old And In The Way. But it turns out Jerry Garcia worked with Chris and Lorin as well, performing on their first record (along with Bill Kreutzmann, actually), though that wouldn’t be released until the year after this concert. (As a side note, Phil Lesh and David Grisman also performed on albums by The Rowan Brothers.) Jerry Garcia and Bill Kreutzmann join them for the set captured on this disc.

Bill Graham introduces the group after thanking the audience, and then they start their set with “Hickory Day,” which would be the lead track on their self-titled debut album. “Outside Clover” is one of my favorites from their set. It has a wonderfully positive feel. That’s followed by “Don’t You Worry About A Thing.” (Elsewhere I’ve seen this song labeled as “Grumbling Angel.”) “Better Off Dead” is a lot of fun, and it leads right into an energetic rendition of “Peace And Happiness.” After “Mama Don’t You Cry,” The Rowan Brothers played “We’re Gonna Get Higher,” the one song from this entire night that is missing from the five-disc set. Its absence might be due to a problem with the source material, as the only recording of this song I could find online was incomplete. Still, it would have been good to include it anyway, the two minutes or so that exist. Their set ends with “Move On Down,” a song that would be included on their first record.

Rather than write the track lists, I’ll include a photo of the back of the box (just keep in mind the error concerning “Beat It On Down The Line”). 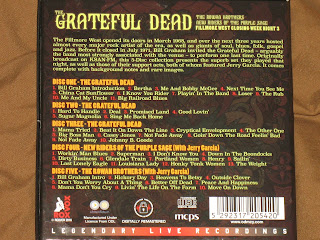