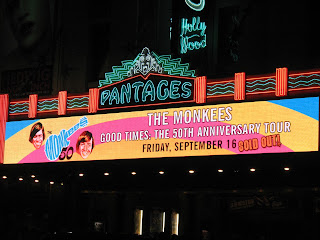 To celebrate their fiftieth anniversary (holy moly, we are all getting old), The Monkees have been touring the states. For most of the tour it’s been just Micky Dolenz and Peter Tork, but it was announced approximately a month ago that Mike Nesmith would join them for the Los Angeles show at the Pantages Theatre. Peter Tork ended up missing the two shows before this one (both in Arizona) due to a family emergency, and interestingly Mike Nesmith was able to fill in for him at both shows, and so had a chance to play the songs again before his scheduled stop in L.A. The word is the L.A. show might very well be Mike Nesmith’s final show with the band. He indicated as much on his web page. And perhaps for that reason, the show sold out (although maybe it would have sold out anyway). Before the show I talked with several people who had flown in from other states for this concert specifically for that reason.

The doors were open when I arrived, at approximately 6:40 p.m., but the inside doors were still shut. So we couldn’t yet take our seats, and I was told they wouldn’t allow seating until 7:30 p.m. I thought that was interesting, as the start time listed on the tickets was 7:30. Maybe the idea was that given an hour to do nothing but hang out in the lobby, people would spent a lot of money on drinks and merchandise. I took a look at the merchandise table, but I don’t really need another T-shirt. I was hoping there might be some special live CD, available only at shows. Oh well, no matter. I wasn’t there for shopping, but to enjoy an excellent concert.

They ended up letting us take our seats at 7:15. And to my dismay I discovered that I didn’t have an aisle seat. I had specifically bought an aisle seat in the last row, so that I could dance without bothering anyone (also, I’m a bit claustrophobic), but it turned out the last row went straight across without a break. Something to note for future shows. The venue, by the way, is quite pretty, quite ornate. At 7:38 p.m., there was an announcement that the concert would start soon, that they wanted to give the rest of the folks a chance to get in and take their seats, that traffic was bad. When is traffic not bad on a Friday in Los Angeles?

Then at precisely 8 p.m. the “Theme From The Monkees” was played over the speakers, while the two opening credit sequences (season one and season two) were shown on a split screen behind the stage. And then the band came out and kicked off the show with “Last Train To Clarksville,” with Micky on acoustic guitar. The show moved at a brisk pace, especially at the start, with little or no stage banter between songs, and sometimes hardly a pause. In fact, at various times during this show, they went from one song straight into another, something I expect at Dead & Company and Yonder Mountain shows, but certainly not at Monkees concerts. It was a wonderful surprise. (Just look at those arrows in the set list.) They followed “Last Train To Clarksville” with “Papa Gene’s Blues,” always one of my favorites. The “Play, magic fingers” line got a big cheer from the audience. Mike then left the stage, and Micky got behind the drum kit for “Your Auntie Grizelda” and “Saturday’s Child.” It wasn’t until after “She” that we really got any stage banter, with a little introduction to “A Little Bit Me, A Little Bit You,” with Peter on acoustic guitar.

Mike returned to the stage for “She Makes Me Laugh,” the first song of the night from the band’s new album, Good Times!, and also the first song of the night to feature Peter Tork on banjo. By the way, if you haven’t yet picked up Good Times!, I highly recommend doing so. It’s one of my favorite CDs of the year. They followed “She Makes Me Laugh” with “The Girl I Knew Somewhere.” But for me, the highlight of the first set was what followed: a seriously sweet rendition of “Sometime In The Morning,” with Micky’s vocals sounding so good, going straight into “Me & Magdalena,” which is probably the best song from the new CD. Mike and Micky were at their best vocally on this number. It was really beautiful.

Mike left the stage again, and Peter  then talked about using the Way Back Machine to go back in time and evoke the voice of Davy Jones for the next number, “Shades Of Grey,” a song that always affects me. And yes, a recording of Davy Jones was used at the beginning of the song. The images on the screen were all in black and white for this song. Peter then put what they jokingly referred to as a “table cloth” on Mickey before they started “Randy Scouse Git” (watch the band play the song in the old episode of the television series, and you’ll know what I’m talking about; and while you watch that segment, pay close attention to Mike Nesmith in the background at the beginning – he’s fucking hilarious). Peter then talked a bit about the television show, and that led into “For Pete’s Sake,” with Peter on lead vocals.

Mike returned again for “You Bring The Summer,” another fun, catchy tune from the new album. That was followed by “Listen To The Band” straight into “What Am I Doing Hangin’ ‘Round?” to end the first set. The first set ended at 8:55 p.m.

At 9:15 p.m., they came out to kick off the second set with “Mary Mary” straight into “Circle Sky,” a great, high-energy section of the show. They followed that with two more songs from Head – “Porpoise Song” and “Long Title: Do I Have To Do This All Over Again.” “Words” is a Monkees song I am always excited to hear, and they did a great version of it last night, and followed it with another excellent song, “Sunny Girlfriend,” which then led straight into “(I’m Not Your) Steppin’ Stone.” During “Steppin’ Stone,” Micky and Peter joked with someone in the front row. They interacted with folks in the front a few times during the course of the show.

For me, one of the highlights of the second set was “You Just May Be The One” into “You Told Me” into “Birth Of An Accidental Hipster.” That whole segment was fantastic, and Peter was on banjo for all three tunes. “Birth Of An Accidental Hipster” is one of the most interesting songs from the new album, and I like it more and more each time I hear it. Mike then left the stage again, and Micky sang “Goin’ Down,” at one point early in the song putting the microphone in front of one of those folks in the first row, letting her sing several lines. That song also included band introductions (the band, by the way, included family members Christian Nesmith and Coco Dolenz). That led to another of the show’s highlights, “D.W. Washburn.” I love hearing the band do rare numbers like this one. At many stops on this tour they also did “Steam Engine,” but not in L.A. (As far as the band dipping into their lesser played material, the best show I ever saw them do was in Lowell, Massachusetts in 2011. You can check out the set list here.) Anyway, “D.W. Washburn” was a delight, and at the end Micky repeated the line, “I’m feeling fine,” a nice touch.

As great as that was, it was followed by one of the best moments of the night. The band left the stage, and Mike Nesmith played “Tapioca Tundra” solo. He first talked a bit about the song, and how it came about after The Monkees had played their first gig in Hawaii, how the song was sort of a reaction to that experience. He played the song as he had originally arranged it, and it was wonderful. It was a beautiful, moving rendition, and his vocals sounded excellent. The band then wrapped up the second set with “Daydream Believer.” Micky joked, “If you know the lyrics, don’t sing along – it puts me off.” But they used a recording of Davy’s vocals for the lead anyway. People in the front held up cards with the lyrics on them, one word per card. By the way, people, please don’t wave your cell phones around as if they were lighters. That’s retarded. The first time I saw people do that, I laughed, because I thought it was offered in the spirit of a joke. But now it just strikes me as sad.

The encores were “Pleasant Valley Sunday” and “I’m A Believer.” And then as the three Monkees took their bows, the rest of the band played an instrumental version of “Theme From The Monkees.” The show ended at 10:14 p.m.

Set I
Set II
Encore
Was this really Mike Nesmith’s final Monkees show? I don’t know. Here are a few photos from the show:

And here is a photo of the venue before the show started: 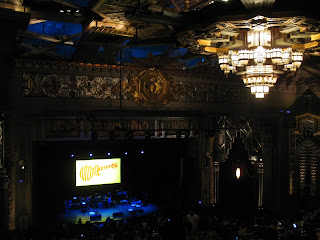 The Pantages Theatre is located at 6233 Hollywood Blvd. in Los Angeles.
Posted by Michael Doherty at 1:46 PM