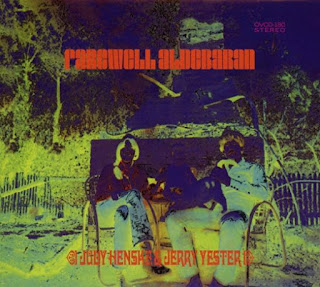 Judy Henske & Jerry Yester’s Farewell Aldebaran is a strange one, to be sure. Even for 1969, it is on the odd side. I’ve heard a lot of interesting music from 1968-1969, a time when bands were somewhat freed from conventions to see where their fancies took them, and it seems Judy and Jerry’s fancies took them in all sorts of unusual directions. Jerry Yester had played with the Modern Folk Quartet and then was a member of The Lovin’ Spoonful. Around the time of the Spoonful’s demise, he and his wife Judy Henske (who had a solo career of her own) recorded Farewell Aldebaran, an intriguing album combining folk, pop and even classical elements, each tune its own particular world, and featuring help from folks like David Lindley and The Lovin’ Spoonful’s Zal Yanovsky. Every time I look at the CD case, I think it says, “Farewell Alderaan.” Even now, when I know that’s not what it says, I still see it as “Farewell Alderaan.” A good title that would be, actually, though of course this album was originally released in 1969, several years before we even knew about the sad fate of that distant planet. Aldebaran, by the way, is a giant star. Farewell Aldebaran got its first official CD release recently, through Omnivore Recordings, and it includes five previously unreleased bonus tracks.

Farewell Aldebaran opens with “Snowblind,” a great, raw, beautifully harsh tune written by Judy Henske, Jerry Yester and Zal Yanovsky. “Love is nasty, love is so blind/Love shall make us all go snowblind.” Judy really rips into this one vocally, and Zal’s work on electric guitar has something of a blues power. It’s an excellent, somewhat heavy track to get things going. They follow that with “Horses On A Stick,” which is a ridiculously catchy and delightful pop tune. It has an unexpected familiarity somehow, and is one of my favorites. Check out these lyrics: “You’re so afraid you’ll fall/But your horse is shod with starlight/His hooves strike sparks in the night/Afraid someday he’ll carry you away/You’ve hobbled in your mind’s pasture.” Jerry plays harmonium on this track. I am in love with this song, and love it even more as it ends with some “la la la” happiness. Joe Osborn is on bass, and Eddie Hoh is on drums.

Things get darker with “Lullaby,” a song about the end of the world which features Solomon Feldthouse on hammered dulcimer. Play this for your infant to give him or her a grim perspective on life and a good sense of doom. That’s followed by one of the album’s strangest tracks, “St. Nicholas Hall,” featuring a demanding vocal performance by Judy. This one is a message from St. Nicholas Hall, with requests for money for “new texts for zoology” and a new organ. It sounds like a quasi-religious experience. There is a decidedly humorous bent to this song, with lines like “She is mean and incredibly old” and “There’s a banquet for the missal mart/The menu will be a la carte” and “The Lutheran’s hell is threatening, as well,/All the ignorant orphans in Spain.”  It is an intriguing, odd tune. “Three Ravens” then has a sweeter sound.

“Raider” is another favorite. It has sort of a traditional, old-time folk sound, but with a lot going on. Solomon Feldthouse is again on hammered dulcimer, and David Lindley plays banjo (with a bow) on this track. I also like Jerry Scheff’s work on bass. “Oh, you are dreaming me.” Jerry Yester then takes lead vocal duties on “One More Time,” a mellow, sort of bluesy tune about death and a beautiful woman. “All her lovers love as dead now/She’s old, and the cold will kill her/She lusts only for/The far, dark, deep of grave.” That’s followed by another intriguing and compelling song about death, “Rapture.” “Pilots beware/The perilous air/Streaming under your wings/She will betray you/As she sings.” I love Judy’s vocal performance here, and Jerry plays piano, banjo, harmonica and synthesizer on this track.

“Charity” has a lighter feel. “Ivory rings, singing peacocks/And things from the east/There’s a beast on a chain made of gold.” The original album then concludes with its title track, “Farewell Aldebaran,” another of the disc’s highlights. Both Jerry and Judy provide lead vocals, their voices distorted at times to a strange, trippy, kind of creepy effect (as on the lines “It is too far/To come to die/Too far to die”). I love these lines: “Her mouth is torn with stars/And bruised with wings.” It’s a wild track, and fans of science fiction and progressive rock will find things to love about it.

This CD contains five bonus tracks, all previously unreleased. All are (basically) instrumental demos, beginning with “Merry-Go-Round,” which is an early version of the tune that would eventually become “Horses On A Stick.” The recording isn’t perfect here, with the sound dipping low at times, but it’s great to have this track. That is followed by a demo of “Charity,” which isn’t exactly an instrumental. There are vocals, but no lyrics.

“Zanzibar” is a demo of the tune that would become “Farewell Aldebaran.” There are some minor sound issues with this one also, but again, it’s great to be able to listen to it. “Moods For Cellos” is the demo for the track that would come to be titled “Three Ravens,” and it’s really pretty. This one has vocals, but no lyrics. The CD ends with “Divers Asleep,” the instrumental demo for “Rapture.”

CD Track List
This special expanded edition of Farewell Aldebaran was released on August 12, 2016 through Omnivore Recordings.
Posted by Michael Doherty at 4:23 PM