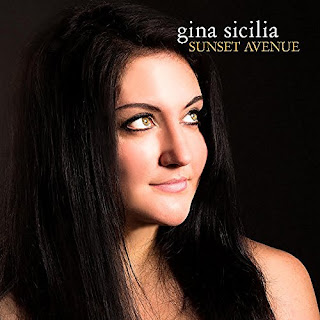 Gina Sicilia is a talented blues singer and songwriter. Her new release, Sunset Avenue, is an EP featuring mostly original material and one really good cover. On this CD, she mixes blues with soul and pop sounds, all driven by her powerful vocals. This is her sixth release, following 2014’s The Alabama Sessions. Joining her on this release are Ron Jennings on guitar, Glenn Barratt on guitar (Barratt also produced the CD), Ken Pendergast on bass, Scott Key on drums and percussion, Gary Oleyar on fiddle, Joel Bryant on organ, Walter Runge on organ and piano, and Charlene Holloway on backing vocals.

The EP kicks off with “Abandoned,” which begins with some tasty bluesy guitar before the rest of the band kicks in. This is a groovy blues song about that sometimes fleeting companion, Love. “Love was here, then it abandoned me/Love is who/Taught me to kiss you/Gone without a clue/Left me to miss you.” That’s followed by “Never Gonna End,” which has something of a soul vibe and great backing vocals. “Blood’s being shed/Heart’s on the mend/This hole that we’re in/Is growing deeper/I’m scared to know/Where will we go?/’Cause this battle we’re in/Is never gonna end.” Though those lyrics indicate a somewhat depressing outlook, this becomes kind of a sweet-sounding song by the end, particularly that instrumental section. Perhaps this is sung by someone resigned to this never-ending battle, not someone anxious or eager to get out of it.

In “I Cried,” Gina Sicilia sings about going to the river and crying. “I just had to cry, cry, cry/My weary eyes/Needed to cry, cry, cry.” Ah yes, sometimes we just have to let it out, regardless of what’s going on around us. A song like this, with its easygoing groove and heartfelt vocals, can act as a friend for us at those times. Songs like this tell us, “Hey, you’re not alone.” And sometimes that’s enough. I like that she tells us, “Life ain’t always bad for me/But right now it’s just too tough.” It’s good to know that this too shall pass. It’s a good song, and it’s followed by the EP’s only cover, “Tell Him,” a tune written by Bert Berns and famously recorded by The Exciters.  Gina Sicilia does a really good job with it. At the beginning when she sings, “I know something about love,” I believe her.  There are some nice backing vocals too. It has a slightly messy ending, but I suppose that’s part of its charm.

This EP concludes with “They Never Pay Me,” which for me is the most interesting track. Musically, there is a lot here to get immersed in. And vocally, she delivers a wonderful and emotionally charged performance. “Why do they have to be so cruel to me/Why oh my oh my/So watch your back/Tread carefully now ‘cause/This ain’t the last of me yet/Don’t underestimate me/I am telling you/This ain’t the last of me yet.” It’s a compelling song, and features some good work on guitar.