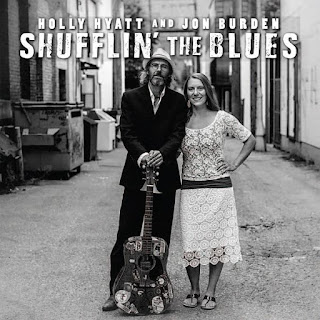 Shufflin’ The Blues is the third official full-length CD from Holly Hyatt And Jon Burden, and the first to be released under their full names (the other two were under the name Holly And Jon). It’s a live album, recorded at The Silverton Gallery, in Silverton, British Columbia, and features mostly original material as well as a few good covers. On this album, this father-and-daughter blues team plays electric instruments on many of these tracks. They are joined on this recording by Marvin Walker on drums and percussion.

They kick off the album with a fun, groovy cover of Muddy Waters’ “Blow Wind Blow,” their rendition featuring a good lead guitar part by Jon that is allowed to go on for a while, which I appreciate, and which gets some well-deserved applause from the crowd. Both Jon and Holly take turns on lead vocals, with Holly getting loose and playful toward the end. They follow that with another cover, “Mother Earth Blues” a Memphis Slim song that clearly had an influence on the British blues bands of the 1960s. You’ll know what I mean when you hear that guitar hook. And I really like Holly’s work on bass. They again take turns on lead vocals. “A little bit of blues is good for the soul,” Holly tells the crowd at the end.

“Let’s Boogie” is a dance number, and the first original number of the CD, written by Holly, who takes sole lead vocal duties on it. “Let’s boogie/Come on, baby, let’s dance/Put your loving arms around me/I want to feel some romance.” The guitar has something of an early rock and roll feel, and there is a cool bass lead section. Holly begins “Lowdown Blues” accompanied by just a bit of guitar, her voice really captivating the listener, finding wonderful heights and interesting depths. This is another original tune, written by Holly and Jon. “Well, I said to the blues, please, please, please go away/They said, baby, we’re here to stay.” Ah, doesn’t it feel that way sometimes? The instrumental section is very cool and catchy.

Holly and Jon do a cool rendition of Robert Johnson’s “Come In My Kitchen,” starting it off slow and mean, with just Jon on vocals. Then after a couple of minutes, it kicks in, and Holly adds her voice. This is a song that Holly and Jon included on their studio album 1929: The Summit Sessions. They also deliver a good version of Nick Gravenites’ “Left Handed Soul.” “I’m feeling cold, so cold, living in this right-handed world with my left-handed soul.” Jon handles the lead vocals on this one.

My favorite track is probably “Black Crow,” an original song by Holly and Jon, one that was included on 1929: The Summit Sessions. I love Holly’s vocal approach to the song, the way her voice plays over that steady percussion and bass line. Here she really gets a chance to show what she can do vocally. “Lovers from long ago, will they meet up in the end.” Plus, this track has a wonderful, catchy guitar part. Holly then does a little bit of delightful, playful scat on “Slushy Blues,” which concludes the album.

CD Track List
Shufflin’ The Blues is scheduled to be released on September 23, 2016 on Flood Plane Records.
Posted by Michael Doherty at 8:39 PM