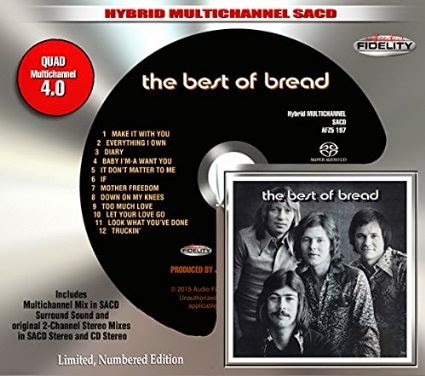 The Best Of Bread is one of those greatest hits albums that everyone should have in his or her music collection (you know, along with Abba’s Gold and Bob Marley’s Legend). Originally released in 1973, it includes such hits as “Make It With You” and “Baby I’m A-Want You.” And earlier this month it received a special multichannel SACD release. This limited, numbered edition sounds excellent. By the way, I haven’t been able to discover just how many of this limited, numbered edition were actually made, though my number is 1014, so there are at least that many.

Bread is known for its 1970s soft rock hits, mostly written by band member David Gates. The Best Of Bread opens with “Make It With You,” which was the group’s first top-ten hit, released as a single in 1970 and reaching the #1 spot in the summer of that year. If you’re having trouble recalling the song for some reason, here is a taste of the lyrics to remind you: “Life can be short or long/Love can be right or wrong/And if I chose the one I’d like to help me through/I’d like to make it with you.”

It’s a good song, but I much prefer the album’s second track, “Everything I Own.” This is a sweet and beautiful tune, with lines like “The finest years I ever knew/Were all the years I had with you/And I would give anything I own/Give up my life, my heart, my home/I would give everything I own/Just to have you back again.” This is one of those songs that finds you in tears in your weaker moments. Boy George covered this one, giving it a happier, sort of reggae vibe, which completely changes the tone. Olivia Newton-John also covered it, her version remaining truer to the original.

“Baby I’m-A Want You” was another big hit for Bread, reaching #3 on the Billboard Hot 100 in late 1971. If you’ve listened to the radio, you’ve heard this song. You’ve also probably heard it in several films and television shows. But in case you haven’t, here are the opening lyrics: “Baby I'm-a want you/Baby I'm-a need you/You're the only one I care enough to hurt about/Maybe I'm-a crazy/But I just can't live without/your lovin' and affection.”  “If” likewise has been used in films and television programs, and is another beautiful song, this one reaching #4 on the Billboard Hot 100. This one was also covered by Olivia Newton-John, as well as by Frank Sinatra, Dolly Parton and Petula Clark. “If a picture paints a thousand words/Then why can’t I paint you/The words will never show/The you I’ve come to know.”

If you’ve only heard Bread’s mellow tunes, then a song like “Mother Freedom” will come as a surprise. This is more of a rock tune, with some really nice work on electric guitar. It kicked off the band’s 1972 record Baby I’m-A Want You, and opened the second side of The Best Of Bread. It wasn’t as successful as the band’s mellower material, reaching only #37 on the Billboard Hot 100. “Down On My Knees,” from that same album, is another more energetic tune, this one co-written by David Gates and James Griffin. “Let Your Love Go” is also more of a rock tune, and was released as a single in early 1971, and also kicked off their 1971 LP, Manna.

One of my favorites is “Too Much Love,” which has more of a folk and country flavor, which I really like. This is one of the few tracks not written or co-written by David Gates. It was written by James Griffin and Robb Royer. This compilation ends with another Griffin/Royer tune, “Truckin’,” a good song that includes a harmonica part.

CD Track List
This special limited edition of The Best Of Bread was released on March 10, 2015 through Audio Fidelity.
Posted by Michael Doherty at 7:49 PM