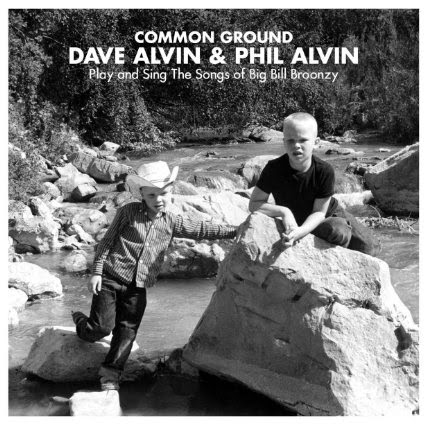 In the liner notes to Common Ground: Dave Alvin & Phil Alvin Play And Sing The Songs Of Big Bill Broonzy, Dave Alvin talks about how he and his brother Phil got their first Big Bill Broonzy record when they were in their early teens. Big Bill Broonzy was a blues singer, songwriter and guitarist who also dipped into folk and country. He performed from the late 1920s until his death in the late 1950s. Big Bill Broonzy’s music is a life-long passion for these brothers, and you can hear it on every track of this CD, their love for this music. Which is great, because I love this music too. And it’s hard to imagine someone not enjoying this disc. These tracks are so damn good, and this music is designed to get you smiling, get you moving, get you feeling that life, after all, is pretty good. I had the privilege of seeing Dave Alvin and Phil Alvin perform several of these songs in concert last year, and it was one of the best shows I attended. They performed without a backing band, but on this disc they are joined by Gene Taylor on piano, Bob Glaub on bass, Brad Fordham on bass, Don Heffington on drums, and Lisa Pankratz on drums.

The album opens with “All By Myself” (which was the song they opened with when I saw them in concert). This is one Big Bill Broonzy released as a single in the early 1940s, and it’s a seriously fun tune. This rendition by Dave Alvin and Phil Alvin certainly embodies that fun vibe, with both Dave and Phil providing vocals. “I didn’t have no one to help me/I had to do it all by myself.” Of course, they’re tackling this one together, and so it has a really bright feel to it. Plus, there’s an excellent instrumental section. They follow that with “I Feel So Good,” another song that Big Bill Broonzy released in 1941. This version by Dave and Phil has a little more rock to it, a little more swing, and I love what Gene Taylor does on piano. Phil takes lead vocal duties on this one, and Dave provides a very cool electric guitar lead part during the instrumental section. “Tomorrow” also has a delightful country swing groove to it, and features more wonderful work by Gene Taylor on keys.

Things get much bluesier on “Southern Flood Blues,” a song which features Dave on electric guitar and Phil on harmonica. Dave’s lead vocals have a kind of sexy, smooth feel at first, quite a bit different from Big Bill Broonzy’s delivery. “Big Bill Blues” is one of my favorite tracks on this CD. Phil’s vocal delivery is just bloody perfect, and the song has a great vibe, a supreme example of how blues you can you feel so good. “I got up this morning, feeling sad and blue/I lost my baby, now tell me what am I going to do/That’s why I am so lonesome, the way these blues keep dogging me/Yeah, but that’s all right, I will overcome someday.”

“Key To The Highway” is another favorite, and one I saw them play in concert. This one features some more nice work by Phil on harmonica, and vocals by both brothers. Leaving never sounded so good as it does here. This is one to put on your road trip mix CDs. “I’m going to leave here running ‘cause walking is most too slow/I’m going down to the border, down where I’m better known.” And I love the way Dave delivers the line, “So come here, sweet mama, and help me with this heavy load,” deep and low and serious. “Stuff They Call Money” is also a hell of a lot of fun, and features both Dave and Phil on vocals. They are clearly enjoying themselves here.

This excellent album concludes with “Saturday Night Rub,” the CD’s only instrumental track, a joyous, fun number that will likely have you deciding to replay the entire album right away. Yes, it's that good.