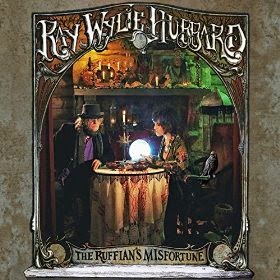 In “Mr. Musslewhite’s Blues,” Ray Wylie Hubbard sings, “This will help you if you got the blues/This will save you if you got the blues.” The line refers to a harmonica (and is followed by a very cool harmonica solo), but it could easily refer to Ray Wylie Hubbard’s new album, The Ruffian’s Misfortune, on which the song appears. This album is full of great bluesy vibes, certain to keep your heart pumping. But there are also some tunes more in the folk realm, such as “Too Young Ripe, Too Young Rotten,” and some more in the rock realm, as “Chick Singer Badass Rockin’” in which he sings, “Says rock ‘n’ roll is flat-out lawless and Joan Jett is a goddess.” Amen. That song is also one of several tunes on this CD with nods to early Rolling Stones, as he mentions Sticky Fingers and Let It Bleed. This is such a great album, and I completely love his voice. Ray Wylie Hubbard’s son, Lucas Hubbard, plays acoustic and electric guitars on this album. The McCreary Sisters provide harmony vocals on “Barefoot In Heaven,” giving us a good dose of gospel. All tracks are originals, written or co-written by Ray Wylie Hubbard.

Ray Wylie Hubbard kicks off the album with “All Loose Things,” an excellent tune with a kind of heavy country twang to its blues, which is bloody delicious. This tune mentions Kevin Welch in the line “A scarecrow’s a-singin’ a song by Kevin Welch/Thunder is rumbling as if the devil himself had belched.” I also dig this line: “The blackbird says the gods can’t save us from ourselves.” The blues continue with “Hey Mama My Time Ain’t Long,” which also mentions the devil in its lyrics, and includes a reference to The Rolling Stones: “And there’s the faithful singing ‘Sister Morphine’” (a sly line, as Marianne Faithfull co-wrote “Sister Morphine” and released her own version in 1969). This one was written by Ray Wylie Hubbard and Jonathan Tyler. Brad Rice plays guitar on this track.

On “Too Young Ripe, Too Young Rotten,” Ray Wylie Hubbard goes more in the folk and country realm, and his vocals have a great intimate feel. This is one of my personal favorites of this album. There is a certain beauty to its sad vibe which is really effective. Plus, there are some excellent lyrics. Check out these lines: “Needs and threads, linen and cotton/May my sins be forgotten/Too young ripe, too young rotten” and “She shares her breath now only with the darkness/She owns a heart wilder than most.”

“Bad On Fords” is a fun kick-ass country rocker, and is another tune in which he mentions The Rolling Stones: “I was raised on The Rolling Stones.” It has a cool outlaw vibe, and its main line is “I’m bad on Fords and Chevrolets, but I’ll be good to you,” which makes me smile every time I listen to this album. And there is humor in his voice when he sings, “And I bet you ain’t a debutante.” “Bad On Fords” was written by Ray Wylie Hubbard and Ronnie Dunn.

“Jessie Mae” is another favorite of mine. It has a great folk/blues base, with some cool work on percussion by Rick Richards. Eleanor Whitmore adds fiddle to this track, which is another element that makes this song a highlight. “Like a hammer and nails on the lowest string, on the lowest string/Oh Jessie Mae, oh Jessie Mae, every time you sing, black angels dance.” The album concludes with “Stone Blind Horses,” another of the album’s highlights. It’s such a beautiful and moving song. Here is a taste of the lyrics: “And there’s ghosts all along the highways/And there’s storms out on the sea/My only hope is somewhere in the heavens/Someone says a prayer for me.” And it features some nice work on harmonica.

CD Track List
The Ruffian’s Misfortune is scheduled to be released on April 7, 2015 on Bordello Records.
Posted by Michael Doherty at 6:15 PM