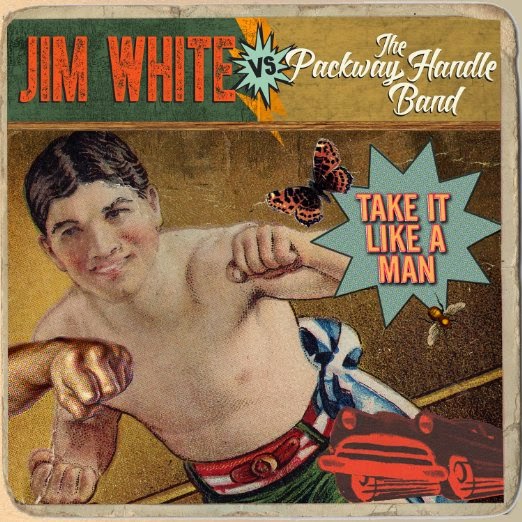 Take It Like A Man is the wonderful and often strange result of the collaboration of Jim White and The Packway Handle Band, with Jim White producing. Some songs were written by White and some were written by members of the band, but all have a delicious touch of the strange, combining great bluegrass sounds with some deliciously twisted and unexpected lyrics.

The album opens with “Smack Dab In A Big Tornado,” a delightfully odd bluegrass tune, with a sort of ominous tone as the lyrics start. But then the first lines take a surprising turn: “He lost his job/After eighteen years/When a big tornado/Carried him away.” Yeah, that would do it. And these lines could be taken as positive or negative, depending on your perspective: “But when he blew away/He didn’t miss a thing.” I love the way these lyrics work. This one was written by Jim White and Mike Pratt. It’s a truly interesting tune with which to open the album.

That is followed by “Breathing Room,” which begins as a peppy-sounding number, but with lyrics that act in contrast to the sound: “You’ve got to pay to play/Admission comes pretty steep/You’re gonna lose it all in the end at any rate/It’s gonna hurt real bad/It’s gonna break your heart.” And the backing vocals after he says he’s asking for a little breathing room make me smile every time. They’re kind of goofy, but totally work. And then two minutes in, the song has an interesting change, and makes me think of They Might Be Giants, particularly in the vocals. “Why such a long climb for such a short fall?” And at the end horns come in, another wonderful surprise. Hey, who is expecting tuba?

“Corn Pone Refugee” begins like a traditional fast-paced bluegrass tune, with some nice work on violin and banjo. This one is ridiculously fun, and is one of my personal favorites. It has some surprises of its own, taking a couple of interesting turns, with a sort of rap. This one was co-written by Jim White and Josh Erwin.

Horn and la-da-da-da vocals open “Not A Song” in a joyous way, and then the first lines are, “This is not a song/This is a cry for help.” I love the way these guys use juxtaposition, the way they put you in a certain mood, set up certain expectations, then take you in a different direction, for the results are often a surprised laugh. Have I mentioned yet how fun this album is? “And I don’t care if you don’t believe me/You know I’ll go on singing/Life is but a dream.”

“Jim 3:16” has a sweeter, more thoughtful vibe, as the group turns philosophical: “A bar is just a church where they serve beer.” This is another track that I love. Check out that absolutely delightful instrumental section. It’s followed by “Gravity Won’t Fail,” which has more of a country vibe, but with some interesting percussion. “You’re like a law of nature science never found/Because gravity won’t fail, but you will let me down.” Wonderful, right?

Joining them on this release are David Van Wyke on cello; Ethan Stevens on tuba and trombone; Kevin Hyde on trombone; Marlon Patton on drums, percussion, keys and additional bass; Claire Campbell on vocals; and John Keane on vocals.

Take It Like A Man is scheduled to be released on January 27, 2015 through Yep Roc Records.
Posted by Michael Doherty at 12:15 PM