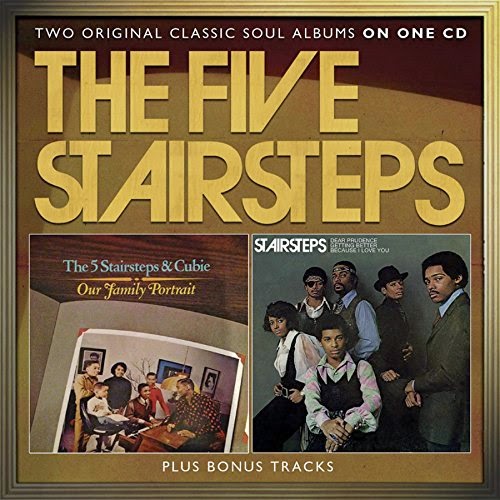 The Five Stairsteps were a family group that formed in the mid-1960s, and recorded some excellent soul songs. This group wrote a lot of its own material, but also covered tunes by The Beatles and Burt Bacharach and Hal David, among others. Our Family Portrait/Stairsteps contains two complete albums, plus a few bonus tracks. It includes the group’s huge top-ten hit, “O-o-h Child,” a song I’ve loved since I first heard it as a child. This compilation also features new liner notes by Kevin Goins, including contributions from Stan Vincent, Keni Burke and Johnny Pate.

The first record, Our Family Portrait, opens with sweet, mellow little gem titled “A Million To One,” written by Phil Medley. It’s about loving against the odds, with lines like “They’re betting everything that our love won’t survive/They’re hoping in time we’ll forget each other is alive.” Ah, those intense youthful thoughts on love. This song makes me feel like a teenager again. It was released as a single, and reached #28 on the R&B chart, and #68 on the Hot 100. “A Million To One” was recorded by several artists over the years, including Donny Osmond and Jimmy Charles And The Revelletts. “You Make Me So Mad” was released as the flip side to “A Million To One,” this one an original tune, written by Clarence Burke Jr. and Clarence Burke Sr. This is a different sort of love song, with lines like “Darling, can you explain the source of all my pain” and “It’s just that you take me through so many changes.”

“New Dance Craze” is a bit ridiculous, due to the youngest singer in the family, Cubie, taking lead vocal duties. He couldn’t carry a tune, of course, being approximately three years old at the time. It’s cute, sort of. Fortunately, other members step in to save the tune, sort of.

Our Family Portrait concludes with a nice rendition of “I Remember You,” leaving the listener in a nostalgic mood. This is a song that has been recorded by such artists as Nat King Cole and Diana Krall.

The second album, Stairsteps, begins with a couple of Beatles covers – “Getting Better” and “Dear Prudence.” Both are decent, and this group finds some interesting things to do with the songs while remaining true to the spirit and feel of the original recordings. “Dear Prudence” was released as a single, but it was its flip side that became the hit. That song, “O-o-h Child,” was then re-released as the A-side of another single. Written by Stan Vincent, “O-o-h Child” is definitely the group’s best song. This is one of those special songs that I can’t imagine not existing. It’s a song we can reach out to, like a friend. And it just doesn’t age. In case you’re not familiar with the song, here is a taste of the lyrics: “Someday we'll walk in the rays of a beautiful sun/Someday when the world is much brighter/Ooh child, things are going to be easier.” By the way, the liner notes include Stan Vincent’s comments on this song.

“Sweet As A Peach” is kind of catchy and delightful. Sure, it’s a bit goofy, but it would be difficult to dislike this song. And why does no one use the expression “blow your mind” anymore? “Sweet As A Peach” was written by Clarence Burke Jr. “Vice The Lights,” also written by Clarence Burke Jr., is a fun dance number, but then with a surprising mellow section. I really like this track. Stairsteps concludes with “Who Do You Belong To,” which has the lines “He’s got two eyes, he's got a nose, he's got two lips/Two lips to kiss/But I've got them too.” Can’t argue with that.

This CD contains three bonus tracks. The first, “Madame Mary,” was written by Curtis Mayfield and released as a single in 1969. It has a great vibe, with lyrics like “Now if all my pain and sorrow/Could leave me by tomorrow.” When he sings, “Come on now, Mary, Mary, Mary” I’m reminded of the end of the Monkees’ “Mary, Mary,” especially live versions.

“The Shadow Of Your Love” is a slower tune, and was also released as a single, this one in 1968. It’s good, but I prefer “Bad News,” which was used as its flip side. This collection ends with “America/Standing,” an interesting medley. “America” is a song by written by John Kay and Jerry Edmonton, and recorded by Steppenwolf as the third part of “Monster/Suicide/America” on their Monster album. The group then goes into “Standing,” a song written by Stan Vincent, before returning to “America.” This is an excellent track, due in large part to the passionate vocal delivery.

CD Track List
Our Family Portrait/Stairsteps was released on December 2, 2014 through Real Gone Music.
Posted by Michael Doherty at 5:27 PM