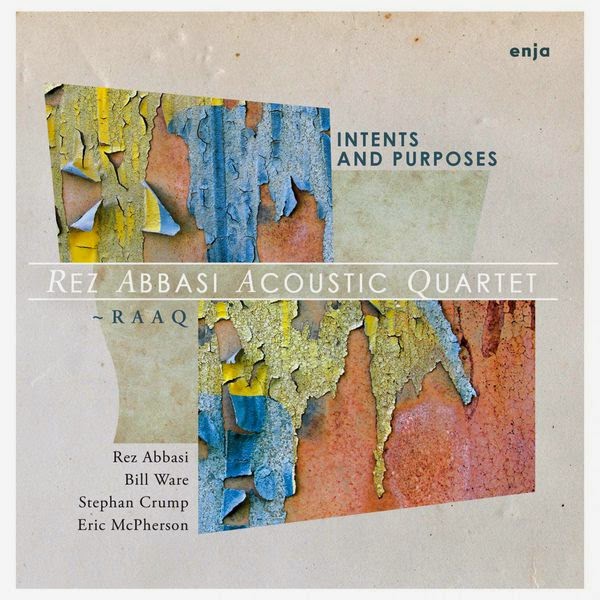 Jazz guitarist Rez Abbasi’s new album, Intents And Purposes, is an interesting group of covers of 1970s jazz-fusion compositions. Done with the Rez Abbasi Acoustic Quartet of Rez Abbasi, Bill Ware, Stephan Crump and Eric McPherson, these tracks are acoustic interpretations, often giving a more contemporary or perhaps timeless feel to material that originally seemed to be very much of its time. This group covers material from Herbie Hancock and Chick Corea, among others. And as Rez Abbasi says in the CD’s liner notes, “this album is in no way a historic perspective of the 70s Jazz-Rock scene.” It is, rather, an interesting new look at, and approach to, some excellent material from that period. This album largely has a good, clear, bright sound, and features some seriously excellent work from all of the musicians.

Intents And Purposes kicks off with the Joe Zawinul composition “Black Market,” originally done by Weather Report. While still featuring a strong bass at the start, this rendition is a bit sweeter and more easy-going, with a bright vibe that I love (partly due to Bill Ware’s work on vibes). And I also really love what Eric McPherson does on drums here. This is a beautiful track that features some excellent work by Rez Abbasi on guitar, particularly toward the end when the track turns to a delicious jam. “Black Market” was the title track from Weather Report’s 1976 release.

“Black Market” is followed by Herbie Hancock’s “Butterfly,” a composition from his 1974 album Thrust. Rez Abbasi’s rendition opens with that familiar groove, and then soon explores new territory, while of course returning to the main section. There are some really wonderful moments on this track, and you can hear the influence of India on Rez Abbasi’s approach at times.

I love how this band’s rendition of Pat Martino’s “Joyous Lake” begins with drums and bass, and it’s like all four musicians are testing the waters before Rez Abbasi then starts touching on the song’s theme. And then suddenly approximately two minutes in, the song opens up wider, but still maintains that sense of joyful exploration. This is one of my favorite tracks, and features some delicious work by all four musicians.

Rez Abassi’s rendition of John McLaughlin’s “Resolution” begins in a mellower, gentler way than the original, and I it find actually more interesting. It is Bill Ware on vibraphone that first takes on some of the energy, as this version builds slowly into a beast of its own.

This group also tackles Return To Forever’s “Medieval Overture,” the wild and strange opening track to 1976’s Romantic Warrior, composed by Chick Corea. Rez Abbasi Acoustic Quartet’s version at first feels quite faithful to the original, and features some excellent stuff from Rez Abbasi on guitar. The wild jam toward the end is what makes this one of my favorite tracks. And it’s followed by some quiet, almost suspenseful work on bass by Stephan Crump, which is wonderful. This version is actually a few minutes longer than the original.

Intents And Purposes concludes with Tony Williams’ “There Comes A Time,” another of my favorites. As you might expect from a composition by Tony Williams, this track features some nice drumming. But it's the overall vibe of this piece that I love. This is an excellent rendition.

CD Track List
Intents And Purposes is scheduled to be released on February 10, 2015 through Enja Records.
Posted by Michael Doherty at 6:32 PM