The Leisure Society: “Alone Aboard The Ark” (2013) CD Review 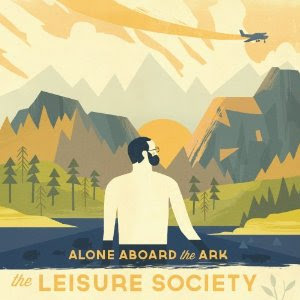 Alone Aboard The Ark is the third full-length release from British band The Leisure Society, and it is one of my favorite albums of the year. Each song has its own singular feel, its own world, so precisely drawn and explored. You know you’re in capable hands, like when reading a collection of short stories from a favorite author. This group seems to take inspiration from all over the musical universe in creating its own joyous and interesting world. There are even some jazz elements, like on “Life Is A Cabriolet.” The backing vocals at the beginning of “All I Have Seen” have a definite 1970s feel (the “doo da” part).

If you dig Belle And Sebastian (and who doesn’t?) you’re likely to really enjoy this disc. Several of the songs remind me of that group, especially “Another Sunday Psalm” and “Fight For Everyone.”  The vocal line and structure of “A Softer Voice Takes Longer Hearing” at times reminds me of Rufus Wainwright (particularly in the chorus). “We Go Together” also reminds me just a bit of a Rufus Wainwright. (By the way, I love that song’s lines, “We make such a perfect mess/We go together.”) That being said, this band really does have its own sound, and it’s bloody fantastic.

Alone Aboard The Ark opens with “Another Sunday Psalm,” a wonderful song whose sound is a sweet mix of folk and pop. It opens with the question, "So what's in the back of your little red book?"
I like this line: “I fought for you once, but I must let go.” The song features some good imagery, like “they’re polishing their claws.” I also like the use of harmonica coming in as another voice.


“Fight For Everyone” is a groovy pop tune that has such a bright feel. It even has a hand-clap section toward the end. And I dig the horns. “Is it hard to relax when you’re told that you can never fail?”  This song was released as a single and video in March, and as a special 7-inch on Record Store Day in April.

“Tearing The Arches Down” is a great, catchy song that is definitely one of the CD’s stand-out tracks. It features some interesting changes vocally, but it is the music of this one that makes me love it. Still, the lyrics are good, though it was probably my third time though before I started really paying attention to them. (Before that, I was just enjoying the groove.) Here is a taste of the lyrics: “A blemish by progress/The memory-stained footsteps/Were buried the day we left.”

“The Sober Scent Of Paper” is another of my favorites. It’s a strange sort of waltz, and the constant brushes on the snare sound like a rain. The vocals are really at the fore, the lyrics driving this song. Check out these lines: “Faith is a race from the silence/Widens and swallows you headfirst and whole/Fight through the whitening bones/So sing while you can, while you’re able/Sorrow may tap at the roots of your song/Light sparks the opening bar.” This song has a feel of being from another (though non-specific) time. There is just an Otherness to it that I can sink into.

“Everyone Understands” is another highlight. I absolutely love the groove created by the piano at the beginning. This song has a great, bright feel, plus some interesting changes.

“One Man And His Fug” begins like some great lost pop gem from the 1960s. It’s a song full of positive vibes, and still, the lyrics are anything but vapid. I love lines like “If I say what you want to hear/The face in the mirror won’t look right” and “Buried in the comfort of monotony/Treading water keeps you from drowning.”

“Forever Shall We Wait” is another excellent tune, and the song from which the album gets its title (the song’s opening lines are “In silence we should sit/Contemplating everything/The world and how we came to be/Alone aboard the ark”). This too has a sense of being from another time (a better, more interesting time and place).  It also has the line, “To dream perchance to sleep” (a reverse of Hamlet’s line from his most famous soliloquy). This track is my personal favorite (and not just because of the Shakespeare reference). There is something glorious about this song.

Alone Aboard The Ark was released on July 2, 2013 on Full Time Hobby.

Posted by Michael Doherty at 2:36 PM