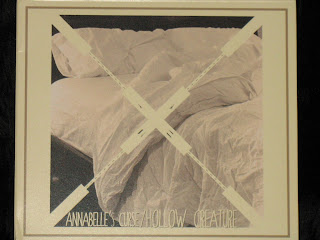 Hollow Creature, the new CD by Annabelle’s Curse, was completely fan-funded through a Kickstarter campaign. It is their follow-up to their debut album, Monsters, which was released in 2011. The band, by the way, is named after an upright bass that broke the night of their first gig. Apparently this instrument caused more than its fair share of mayhem in the group’s early days.

Hollow Creature is a rather serious collection of material, the songs dealing with different aspects of love. This album is really about the vocals and the songwriting. Many of the songs on Hollow Creature have a quiet intensity, and often a distinct beauty.  These songs also make truly interesting use of traditional folk instruments. Though this album fits somewhat under the general category of folk, it is often surprising when some of the traditional folk instruments come in. Perhaps that’s because there is nothing really traditional about these songs, nothing really ordinary. This band has its own distinct sound, so that you almost expect new instruments to have been invented to perform these tracks.

This is an album to listen to at night or twilight, or perhaps at dawn, alone – in that strange moment between what’s fading away and what’s to come, when all is possible and nothing is quite real. When no demands are being made on you, and the world is yours.

The opening track, “Before The Fall,” fades in, kind of creeping up on you. But when the vocals come in, they are surprisingly right there, close to you. The vocals are kind of beautiful in this excellent song about the excitement of new love. Here is a taste of the lyrics: “And your body slowly melted into mine/And I was nervous the moment we first kissed/And you were perfect and clinging to my hips.” The drums play a prominent part on this track, below the vocals (their prominence adds to the effect of the line, “And the thundering in my chest is a timpani”). Then after two minutes, the song kicks with a kind of gorgeous instrumental section, which feels partly grounded, partly in the heavens. This is a really sweet track.

The vocals are again at the fore in “Embers,” a wonderful emotional acoustic song. It begins, “As the years roll by/I want to find something deeper/But my heart is black and blue/And you came along.” There’s an intensity to this song, even before that steady pounding grabs hold.

There is a certain amount of pain expressed in these songs, as might be expected when the subject is love. In “Regret, VA,” they sing, “You were a wounded heart/Should have known it from the start.” Though “Here in Regret, population me” is kind of a silly line.

“From Below” begins with the instruments at a slight distance, slowing building a power, while the vocals directly and immediately engage us. “Will it pass?/Or am I made of glass/If this flight has crashed/Why do the best things never last?” And then nearly two minutes in, the guitar announces itself, its bluesy vibe taking over for a moment. “My head’s adrift and my heart hides amongst the stars.” And then the song suddenly grows in intensity as the line “Why do the best things never last” is repeated, as if demanding an answer from the universe, or at least some acknowledgment of the question, the situation.

“Interlude” is a very short song with piano and vocals that asks, “If your world refused to spin/Would you fall for me again?”

“Hollow Creature,” the album’s title track, is a song of anger and heartache. It opens with the line, “Let the truth be known that all the love that I have shown for you has died.” Then the guitar comes screaming in, matching the vocals in expressing these intense emotions. I like the electric guitar on this one, as it really acts as a voice. Like when words fail, the guitar can express what we’re feeling. This song has an interesting change partway through, when the bass comes to the fore. This is kind of an amazing and powerful song.

But my favorite track on this album is “Tale Of Two Tattered Hearts.” This song really grabbed me. It’s a sad duet with the heavy line, “And it’s unrelenting.” This song is driven by acoustic guitar and the vocals (both male and female). Then, interestingly, hand-claps are added. You might think them out of place in a song like this, considering the subject and tone, but these guys make it work. He then repeats, “I’ll never love you like you’re wanting me to.” And the song ends there, with the repeated line shortened to simply “I’ll never love you.” Just great. I love this song.

Hollow Creature concludes with “New Years,” a song with a certain beauty, particularly in the vocals. There is a positive message in the lines, “Free your heart/Allow yourself another chance to start/Free your mind/The pain you hold will only heal with time.” There is the hope and determination to make a new beginning with the new year.

Posted by Michael Doherty at 1:33 PM