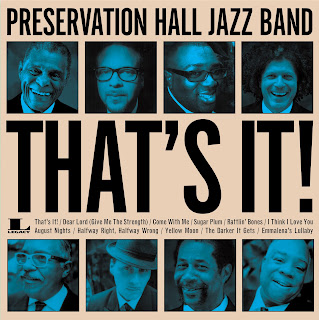 New Orleans is one of my favorite cities, in large part because of its music. I have a weakness for New Orleans music. There is such joy, such exuberance in much of it. This is the kind of music that could make the lame dance. Just try and stay seated while listening to the new Preservation Hall Jazz Band CD.

Preservation Hall Jazz Band is an institution, having gotten its start in 1961. Various musicians have come and gone since then, it being more about the music of New Orleans than about individual players. Yet in its long history, the group never released an album entirely of original material. Until now. The band’s new CD That’s It! features all original music. With this album, these excellent musicians prove they’re also really good songwriters. Several of the songs are instrumentals, like “Sugar Plum,” which features some cool work on percussion, and the album’s energetic title track. But often it’s the vocal performances that are stand-outs. And not all of these tracks are fast numbers. “August Nights” is a slow, sultry, sexy tune. And the album’s final track is a strange, somewhat dark piano instrumental.

That’s It! gets off to a fantastic start with its title track, a song that begins with a great jazz rhythm on drums, and from there bursts open with a wild call on horns. This is a seriously excellent instrumental track, with tremendous energy, the drums never letting up. Shake your bones and whatever else might be handy.

“Dear Lord (Give Me The Strength)” begins with some groovy piano before that unmistakable New Orleans rhythm comes in and lifts you up in its arms. And then the vocals come in, singing of rebirth: “I’ve been weak/I’ve been strong/Well, I’ve done good/But sometimes I’ve been wrong.” This is a voice full of joy and the desire to share it with everyone, believers and non-believers alike.

There is such a feel of romance about New Orleans, which is palpable in “Come With Me,” a delightful love letter to the city. The song’s only lyrics are: “Come with me to New Orleans/I’ll show you a great time/All your dreams will come true with me by your side/So come with me to New Orleans/What a city you will see/All your dreams will come true in New Orleans.” Are any other lines needed? No. It’s a simple, but positive, promising message. The only other thing needed is a wonderful instrumental section, which this song delivers.

“Rattlin’ Bones” is one of my favorites. It’s just so ridiculously cool. And it’s a song I’m adding to my Halloween play list. As you know, Halloween is the best holiday, and I’m always looking for new excellent songs to play at that time, and this one totally fits the bill. Here is a taste of the lyrics: “The graveyard bones make a rattlin’ sound/The dead get up and start walking around.” New Orleans certainly has that air about it, that sense that the dead could very well rise. There is magic in that city. There is voodoo. But it all has a positive rather than frightening feel about it, like if the dead did rise, they’d likely engage in a kick-ass jam session rather than eat your brains. “Rattlin’ bones, rattlin’ bones/Creeping around from behind their head stones/If you don’t want to see them, then you’d best stay home/Because there ain’t no running from the rattlin’ bones.”

“Yellow Moon” moves like a charmed snake over your body, and you move with it, caught in the spell yourself. It can feel so right to lose yourself in the music, so close your eyes and see how your body reacts. There is something sexy, yet playful about this instrumental track (it’s playful particularly in the way it ends).

I really dig the vocals on “The Darker It Gets,” a song with a catchy old-time rhythm. The opening lines are: “The darker it gets, the better I see/That hidden place inside of me/Some little place inside of me.”  I also really dig these lines: “I found a place no one’s known before/The birthplace of your beauty/That’s why I’m back for more/Come to that hidden place/Oh, come to that sacred space.” This is a very cool tune, though it ends with a rather silly and somewhat out-of-place “Oh yeah.”

That’s It! was released on July 9, 2013 on Legacy Recordings. It was released both on CD and vinyl, the vinyl version containing a poster.

Posted by Michael Doherty at 1:15 PM