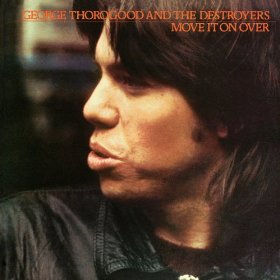 Move It On Over is the second album by George Thorogood And The Destroyers, originally released in 1978. It is now being re-issued by Rounder Records. Like their first record, this one features a couple of Elmore James songs, and a Bo Diddley tune. Unlike the previous release, this one has no original material by George Thorogood.

The album opens with “Move It On Over,” the title track, which is the song I most associate with George Thorogood. I remember how shocked I was to learn it was a Hank Williams song. George Thorogood totally owns it, really makes it a great rock and roll tune, one that's fun to dance to. “She changed the lock on my back door/Now my key, it won’t fit no more.” By the way, this totally holds up. It feels like it hasn’t aged at all. The guitar is still great fun.

Things get much more bluesy with the band’s cover of the Elmore James song “The Sky Is Crying.” On the first album they covered James’ “Madison Blues” and “Can’t Stop Lovin.’” I actually think their take on “The Sky Is Crying” is even more effective. I really love some of the guitar work on this song – George Thorogood does some truly interesting stuff.

And then he does a great job on “Cocaine Blues,” the country tune made famous by Johnny Cash. And yes, he does it as country. It’s a perfect song for him, for it has that great attitude, and George Thorogood is a guy who can sell it. Of course, it’s tough to follow Johnny Cash and suffer the comparisons, but he does a damn good job with it. He gives just a slight pause before the phrase “dressed in black,” the phrase most associated with Johnny Cash.

George Thorogood goes from country to straight rock and roll with “It Wasn’t Me,” a fast-paced Chuck Berry tune. It’s good, but doesn’t quite capture the humor of Chuck Berry. Also having an old rock and roll vibe (though a much slower number) is James Moore’s “I’m Just Your Good Thing.”

This album includes an upbeat version of “That Same Thing,” a song written by Willie Dixon. I’m used to meaner, slower renditions (like that by the Grateful Dead). This one is not as bluesy as a lot of versions. And though I prefer slower versions, this one is still pretty cool.

The album closes with its second Elmore James tune, “New Hawaiian Boogie.” This is more of a rock tune, with a bit of spoken word vocals, but mainly just a good driving beat and some fun work on guitar.

Move It On Over is scheduled to be released on July 30, 2013 on Rounder Records. Also to be re-issued on that day is George Thorogood And The Destroyers, the band’s first album.

Posted by Michael Doherty at 12:34 PM